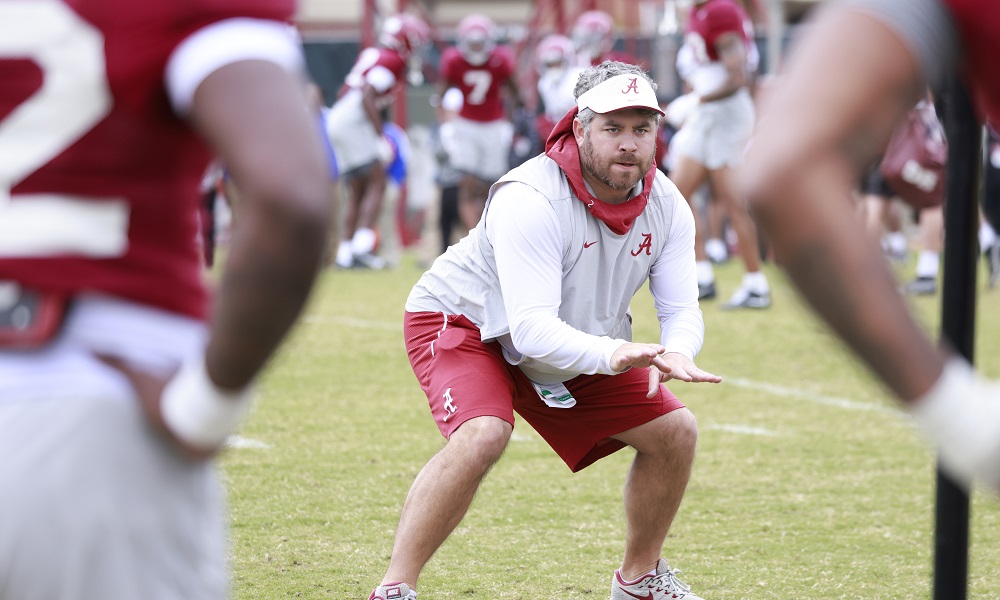 Nick Saban allows his offensive and defensive coordinators to speak twice a year at the University of Alabama.

The first opportunity comes during the first week of August as the Crimson Tide begins preseason camp. Fans were excited to hear the perspective of Saban and Bill O’Brien on Sunday, but a confident Pete Golding took the podium with much swagger.

RELATED: Will Anderson is fired up about Alabama’s team chemistry: ‘There are no knuckleheads in the locker room.’

Golding enters his fifth season on Saban’s staff (fourth as defensive coordinator) and finally possesses a group that excites him.

As a native of Hammond, La., he came through the ranks as a small school defensive backs coach, coordinator, and linebackers coach. Golding arrived in Tuscaloosa in 2018 as a co-defensive coordinator. He became the main play-caller in 2019, but injuries at critical positions have limited the production of Alabama’s defense for three seasons. Golding saw Dylan Moses and Joshua McMillon get hurt in 2019, Moses and Malachi Moore injured in 2020, and Christopher Allen, Josh Jobe, and Jalyn Armour-Davis down in 2021.

He now has a healthy defense filled with leadership on each level. People can officially judge and evaluate Golding in the fall, but the 38-year-old is ready for the pressure. He spoke about Alabama will finish the job for a national championship.

“I like where we are at,” Golding said on the defense in fall camp. “I think the leadership is where it needs to be. We have to continue building the bottom of the roster with these young guys, but this is a new year. I think the guys in the room like DJ Dale, Will Anderson, and Henry To’oto’o, remember the last 15 minutes of football they played. That is not how we want it to be. The bottom line is we did not get it done. We could not stop the run like we needed to. That is still in the gut. When they come to work, we want them to remember that feeling. We have to prepare the right way, so we do not have to feel that again.”

RELATED: How will Alabama’s offense look in year two under Bill O’Brien?

Golding discussed competition battles at cornerback, defensive line, and inside linebacker. He wants to have all pass rushers on the field to attack quarterbacks. Golding even dropped in some cuss words, showing his passion about this being his year as a coordinator. He was honest and authentic about last year, but Golding has a group that should be the No. 1 unit in the nation.

People compare Golding to Kirby Smart and Jeremy Pruitt, but both coaches had game changers on all levels of the defense at Alabama. Smart and Pruitt consistently had unbelievable athletes and high-character players. Golding has a gifted athlete in Will Anderson, but now he pairs Dallas Turner, Chris Braswell, Henry To’oto’o, Jaheim Oatis, and Brian Branch with Anderson.

Golding could be up for the Broyles Award, which goes to the nation’s top assistant coach.

He knows that now is his moment to rise and is prepared.