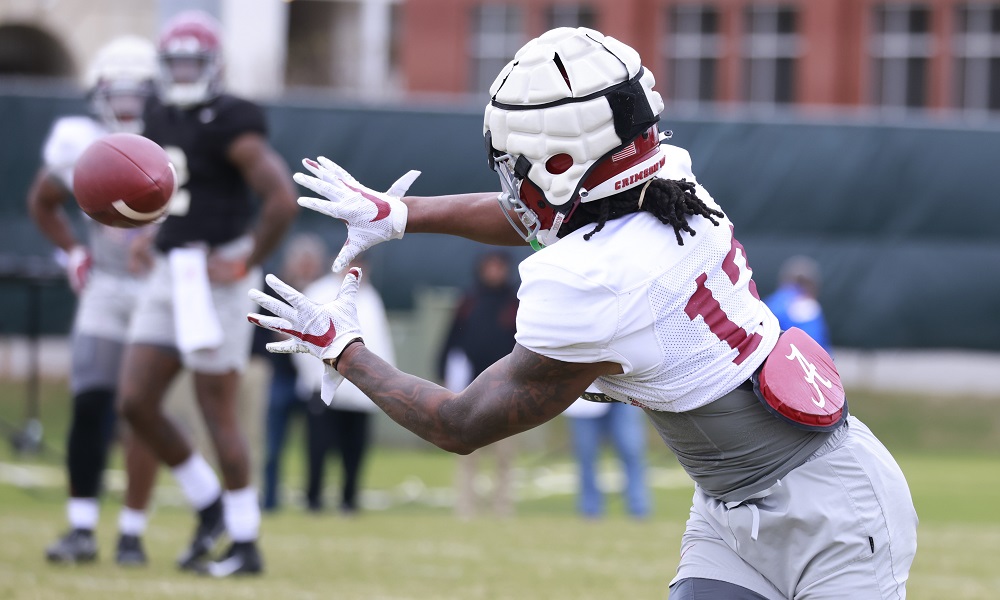 Everyone for Alabama football is fascinated by Jahmyr Gibbs in preseason camp.

Coaches, players, and fans cannot wait to watch him excel in the fall. He arrived to the Crimson Tide in the spring as a transfer running back from Georgia Tech. Coach Nick Saban quickly noticed his speed, explosiveness, and playmaking abilities as a receiver and return specialist. Players such as Bryce Young, Henry To’oto’o, and Will Anderson are impressed with Gibbs.

He posted 589 kick return yards and totaled seven touchdowns. The 5-foot-11, 200-pounder showed his burst in front of Tide fans in the spring game on a 75-yard touchdown run at Bryant-Denny Stadium. To’oto’o told reporters he has ‘never guarded a back like Gibbs.’ Young expressed to the media at SEC Football Media Days how Gibbs is a complete player. Anderson had his opportunity to talk about the talented back on Tuesday. The junior linebacker said it’s a ‘big challenge’ playing against Gibbs.

“He is fast,” Anderson said of Gibbs. “He’s a really good running back with elite speed and can catch passes outside the pocket as well. It is different trying to run with him because he’s like a wide receiver sometimes, but it’s great. I love playing with him.”

Gibbs is improving To’oto’o and Anderson as linebackers. He adds a fun element to Alabama’s offense, and Bill O’Brien is prepared to explore it. Gibbs could be a darkhorse candidate for the Heisman Memorial Trophy.