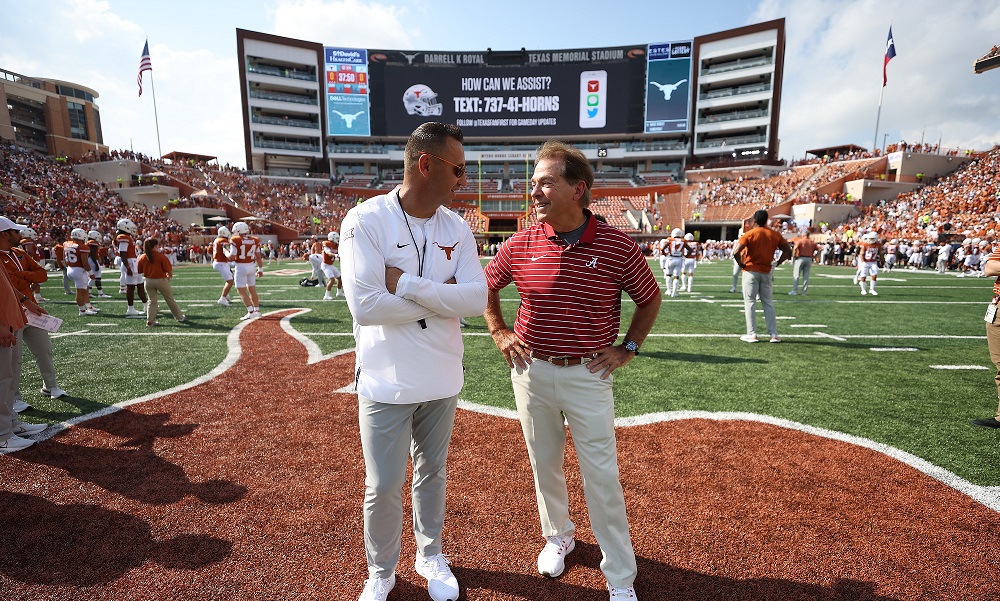 Alabama ended week two of its season with a win over Texas, but its performance caused concern for Crimson Tide fans.

Coach Nick Saban witnessed a 20-19 victory, yet there is work for Alabama to do. Before the Tide faces Louisiana-Monroe, we check out the biggest takeaways from Alabama’s performance against the Longhorns at Darrell K Royal-Texas Memorial Stadium.

1. Bryce Young is a Heisman winner for a reason

Many things went wrong for Alabama football, but it defeated Texas.

Bryce Young overcame poor play-calling, 15 penalties, a lack of protection, and an inconsistent run game to lead the Crimson Tide to a victory.  He delivered the Tide to a game-tying touchdown drive against Auburn in the 2021 Iron Bowl. Young’s 28-yard strike to wide receiver Ja’Corey Brooks forced the game to four overtimes. Alabama won the matchup, 24-22. He totaled 213 passing yards, 38 rushing yards, and a touchdown versus the Longhorns, but Young’s poise on the final drive did it for the Tide.

He took Alabama on a 61-yard drive in nine plays with 1:27 remaining in the game.

Young got the Tide in a position for Will Reichard to attempt a 33-yard field. Reichard made the kick, but Young’s late heroics reminded fans why he is the reigning Heisman winner and a former five-star. No moment is too big for him to master.

2. Alabama’s OL has to find its five most consistent players

Alabama has depth on its offensive line, but Eric Wolford needs to find the five best players.

Kendall Randolph has been in Tuscaloosa for six years; however, it is time for Wolford to go to Javion Cohen at left guard as the starter. Cohen started 14 of 15 games and has more size than Randolph. JC Latham has played well at right tackle, Emil Ekiyor is holding his own at right guard, Darrian Dalcourt is an improved center, and Tyler Steen will improve at left tackle with more reps.

Run blocking (man-on-man) and pass protection are the areas this group must improve in before the marquee Southeastern Conference competition starts. If one removed Jase McClellan’s 81-yard touchdown run, Alabama totaled 80 rushing yards against Texas. Bryce Young got sacked twice, hit several times, and forced out of the pocket.

The offensive line has to get better for the Tide.

3. Two cornerbacks must solidify themselves as starters

Nick Saban has no idea who are his best two cornerbacks.

Quinn Ewers and Texas’ receivers exposed Kool-Aid McKinstry and Khyree Jackson all game, while Terrion Arnold had good moments. We did not see Eli Ricks, a transfer from LSU, and Alabama fans don’t understand why. The cameras showed him on the sideline with a towel on his head. As much as he wants to see competition, Saban should look at Ricks and Arnold as the primary cornerbacks. McKinstry gets burned by speed receiver, and Jackson gets lost in coverage.

Travaris Robinson is a good coach, but the Tide needs two guys to solidify themselves.

4. The Tide needs to have a speedy, explosive receiver

Texas has talent in its defensive secondary, but national media expected Alabama’s wide receivers to have success.

The Longhorns’ defensive backs locked up the Crimson Tide’s receiving options. No one got open for Bryce Young on several plays until the fourth quarter. The Tide needs a speedy, explosive receiver to take the top off a secondary. Jameson Williams was the elite speedster in 2021, but who becomes that player for Alabama moving forward? Tyler Harrell, a transfer from Louisville, was projected to be the guy but a preseason foot injury has him sidelined. Hopefully, he can make a return soon to the offense.

RELATED: Alabama drops to No. 2 in the AP Top 25 after narrow win over Texas

Christian Leary has big-time speed, but we have yet to see him a lot on the field.

Alabama played Isaiah Bond against Texas, but the freshman could not complete a reception from Young.

Kobe Prentice had four catches for 27 yards, but is Alabama ready to trust him as a deep threat? Jermaine Burton, Traeshon Holden, and Ja’Corey Brooks are possession receivers. They have speed, but they are not known for being electric players.

Alabama has to find an explosive receiver to create for others.

5. Other defensive players have to finish plays

Steve Sarkisian’s game plan was to limit Will Anderson and Dallas Turner.

Texas was successful in holding both players to one sack combined. Several Tide defenders, including Henry To’oto’o, DJ Dale, and Malachi Moore, had a chance to finish plays for sacks but did not. Pete Golding called different blitz packages against the Longhorns, but no one won matchups to sack Quin Ewers. Hudson Card, Texas’ backup quarterback, got sacked three times during the second half. Anderson sacked Card to force a field goal in the fourth quarter.

Other players for Alabama have to assert themselves. More teams will take away Anderson and Turner and force someone else to create pressure. Jaylen Moody stepped up for the Tide, but fans rarely heard someone else’s name called.

This needs to be fixed moving forward.