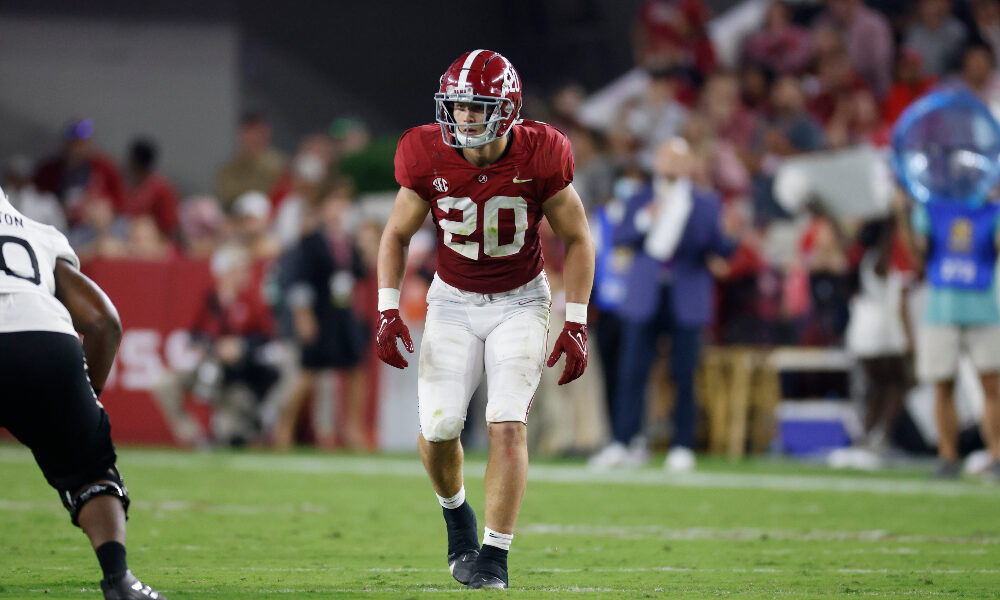 Every season Alabama sees several players enter the transfer portal as they explore other opportunities in their careers. Sometimes the writing is on the wall for certain players, but every once in a while there are some who catch people by surprise.

Sanders, a former five-star recruit, was called upon to fill in for the injured Christopher Allen who was due to miss the entire 2021 season. This would’ve left Sanders with a full-time starting position, but a hand injury sidelined the Denton, TX., native which led to the emergence of Dallas Turner who would finish the season as the starter while Sanders took several weeks to recover.

With Turner and Will Anderson likely manning the starting outside backer positions, along with Chris Braswell competing for snaps as well, Sanders opted to hop over to one of Alabama’s SEC West opponents in Arkansas for a better opportunity.

But as a member of the Razorbacks, Sanders has seen significant snaps at inside linebacker where he has flourished since joining the team. Through four games Sanders has recorded 31 tackles, 5.5 sacks, two pass deflections and two forced fumbles.

His versatility was certainly something head coach Nick Saban was looking to take advantage of this season as he likely would have shifted Sanders to inside linebacker if he’d remained at Alabama.

“That was probably what we were going to do, but never worked out,” Saban said when asked about Sanders playing middle linebacker. “It is what it is. It’s good for him that he can play both positions and that he’s doing well.”

This wasn’t the first time Saban has inferred about what role Sanders may have had with the team, for back on August 31, Saban said during the SEC coaches teleconference that Sanders probably would’ve started.

“He’s a fine young man, really good football player,” Saban said. “Played extremely well for us last year, had an unfortunate injury that held him back. He would have probably been a starter here this year.

“I’m sure he’s probably going to do really well where he is there at Arkansas. He’s a great competitor and person. I can’t say enough good things about him.”

Leading into the season, Alabama had heavy competition at middle linebacker alongside Henry To’oto’o. Senior Jaylen Moody and redshirt freshman Deontae Lawson were the two battling it out for the second spot with Moody eventually earning the role.

Moody himself had even entered the transfer portal following the Crimson Tide’s loss in the national championship game, but would eventually announce his return to the team five days after Sanders chose to join the Razorbacks.

Who’s to say if Sanders would’ve won the job, but he has now become one of the most impactful players on the Arkansas defense.

“Drew was a good player when he was here,” Saban said. “Unfortunate injuries. And he’s certainly playing well for them. It’s good to see that he’s doing a good job for them. We’re happy for him and his family.”