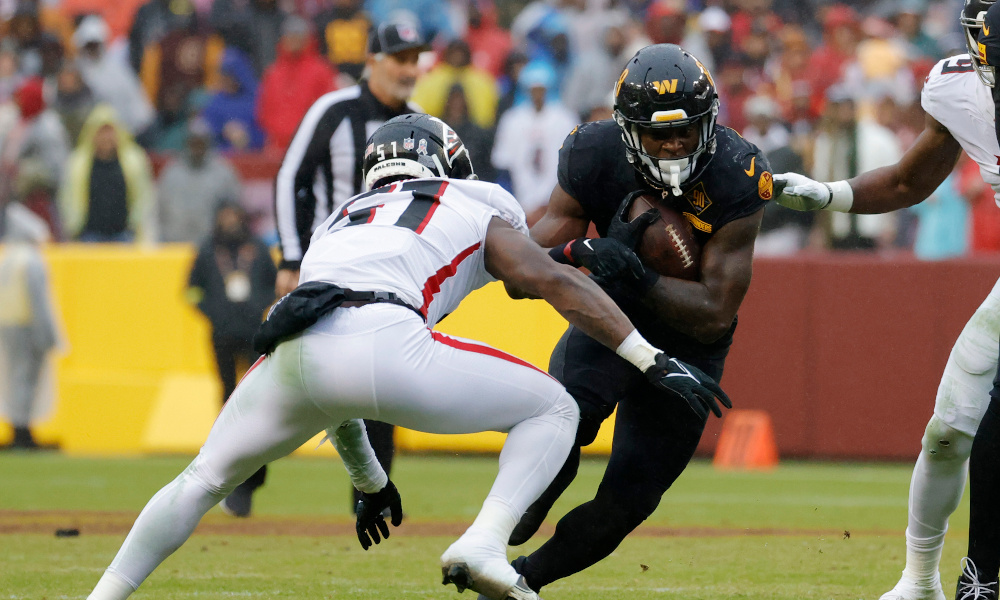 Every Alabama fan and Washington Commanders fan was all smiles on Sunday against the Atlanta Falcons.

Brian Robinson Jr., a Crimson Tide alum, had a life-changing moment in late August. He got shot multiple times in the lower body during an attempted robbery, and things could have easily gone bad for him. As a native of Tuscaloosa, Ala., Robinson endured the mishap, had surgery, and is showing the Commanders why he was the best move for them in the NFL Draft.

He captured a milestone moment for a running back versus the Falcons. Robinson recorded the first 100-yard rushing performance of his career in Washington’s 19-13 victory. He pounded Atlanta for 105 yards rushing on 18 carries, averaging 5.8 yards per rushing attempt. His longest run went for 21 yards, but Robinson had several plays that resulted in first downs.

He also showed his versatility as a receiver, catching two passes for 20 yards.

Robinson ended the Commanders’ first touchdown drive of the matchup with a 14-yard touchdown catch. He impressed NFL scouts in his final season at Alabama, totaling 35 catches for 296 yards and two touchdowns. Robinson finished 2021 with the Tide by posting his first career 1,000-yard season, collecting 1,343 yards and 14 touchdowns. He helped the Crimson Tide to a Southeastern Conference Championship and has three SEC title rings (2018, 2020-21). Robinson arrived in Alabama’s 2017 recruiting class as a four-star from Hillcrest High School. He has two College Football Playoff National Championship rings.

Washington has won three straight games, improving to 7-5. Robinson was highly impactful in two of the three.

He has the Commanders on pace to grab a playoff spot.