Offensive Line [B+] – Give the offensive line a lot of credit for the way they bounced back after the horrible performance against Virginia Tech. They came out against the Aggies live and ready to play. Against Virginia Tech, Alabama totaled just 206 yards of offense. Against Texas A&M, the Tide racked up 568 yards of total offense.

The offensive line did a great job this week in their ability to provide running lanes for TJ Yeldon, Jalston Fowler and Kenyan Drake. They did a phenomenal job protecting AJ McCarron as his jersey stayed white the entire game. The lone problem in the game for the offensive line was penalties. The Crimson Tide had 12 penalties for 104 yards. The majority of the penalties were false starts, which result from a lack of focus from the offensive line.

Running Game [A-] – After having just 74 yards rushing against the Hokies, Yeldon put on a show in College Station on the ground. He had 25 carries for 149 yards (6.1 yards per carry) and a touchdown. He followed behind his offensive line, hit the holes hard and gained huge yards almost every time he got the football. Drake and Fowler put together a great game on the ground as well. They had 11 carries combined for 87 yards and two touchdowns. Like the O-Line, give Fowler a ton of credit.

After missing last season, he played a pivotal role against Texas A&M. Not only did he run the ball well, but he opened up holes for Yeldon and Drake along with catching the touchdown pass from McCarron that sealed the game. Though Yeldon ran the ball well, he must improve in the aspect of ball security and keeping his composure.

His fumble in the redzone was crucial and led to a huge touchdown drive for Texas A&M. He also was flagged for 15-yard sportsman like penalty (doing the Johnny Manziel “money” sign and cut throat sign) after scoring. To be in Saban’s system, you have to show class and not cause silly penalties that will hurt your team.

AJ McCarron [A+] – He’s gone from being game manager and leader to now calling his own play to seal the game. How exciting has it been to watch the maturation of McCarron?! Last season, he witnessed Johnny Manziel outplay him in Bryant-Denny Stadium. This time, McCarron returns the favor and shined greatly at Kyle Field.

His game was razor sharp and efficient. Despite the crowd noise, McCarron was as cool as the other side of the pillow and once again delivered a victory in the big game. Against the blitz, he used his check downs wisely, made the right reads and got the ball out quickly. As for his statistics in the game, he was 20-29 (69.0 percent of passes completed) passing for 334 yards, four touchdowns and a quarterback rating of 211.2.  In the preseason, SEC coaches ranked McCarron as being an All-SEC third team quarterback, but after this performance they may need to think again.

Defense [C+] – When you play against Johnny Manziel, let’s be honest you are not going to stop him. Your only hope is to try to slow him down or make sure your offense stays on the field and limits his time on it. Alabama’s defense got the stops when they needed to, whether they physically stopped A&M or if A&M helped them out with a penalty, a stop is a stop. People say that your best offense is a good defense. With that being said, give Vinnie Sunseri a lot of credit. For the second game this season, he has been in the right place at the right time. His 73-yard interception off Manziel for a touchdown was part of the 28 unanswered points rally for the Crimson Tide. Though he bullied all day by Manziel and Mike Evans, Cyrus Jones had an interception in the game as well.

Alabama gave up 628 yards of offense to Texas A&M. Most of that came from the secondary in their inability to defend Evans. Evans at 6-foot-5, 225 pounds poses as a mismatch for any secondary. He gave Jones and John Fulton fits with his size and deceptive speed. He had seven receptions for 279 yards and a touchdown.

Receivers [A] – Everyone talks about Amari Cooper and Kenny Bell, but how about some love for DeAndrew White. He had a monster game receiving against the Aggies defense. In his return from injury last season, White had four receptions for 82 yards and a touchdown. Kevin Norwood turned in a fine game receiving. He had three receptions for 68 yards and a touchdown. Kenny Bell had a touchdown in the game and even true freshman tight end O.J. Howard stepped up huge under the lights of the 12th Man. Howard had three receptions for 68 yards.

In the preview it was mentioned that the team who could keep its composure, minimize mistakes, convert third downs and make the plays needed would win this game. On third downs, Alabama was 50 percent; Texas A&M was 62.5 percent. In the turnover battle, the Crimson Tide won that 2-1. Alabama kept its composure in a hostile environment for the most part and they made the plays when it counted to hold off the Aggies and prevent déjà vu from happening again.

The Crimson Tide is known for defense, a ground and pound game and grinding out wins. Behind McCarron, the Tide proved that they can win a shootout, high scoring game. Alabama defeats Texas A&M 49-42 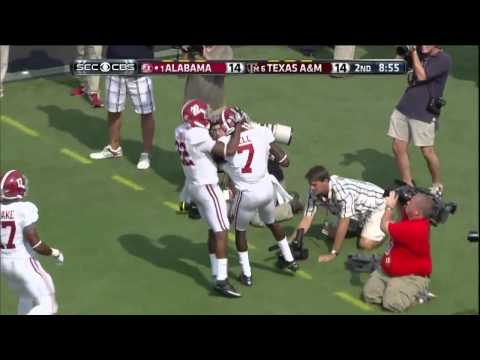