For kickers, they are the last line of offense. When a drive stalls, it is up to them to provide three points on the scoreboard. Along with providing points, kickers need to have an “ice in the veins” mentality. This means they must maintain a positive outlook and can’t let the pressure get to them. As for backup quarterbacks, they have to prepare for a game as if they are the starter. They have to watch film, be at practice every day, study the playbook and be ready even if they are not called upon.

As a native of Gainesville, Ga., Blake Sims attended and played football for Gainesville High School. He became known there as an explosive athlete. In his junior year, Sims totaled 3,736 all-purpose yards (2,785 passing and 822 rushing) and 49 touchdowns. As a senior, Sims went 150-254 (59 percent of passes completed) passing for 2,288 yards and 28 touchdowns. He had 115 carries for 863 yards (7.5 yards per carry), 13 touchdowns and led his team to the state championship in 2009 in which they finished runner-up.

For his success on the gridiron in high school, Sims was recognized twice as AAA All-State by the Atlanta Journals Constitution and the Associated Press (2009). According to Rivals.com, Sims was ranked a four-star recruit and the No.33 athlete nationally. ESPNU rated him as the No.63 athlete and in 2010 Atlanta Journal-Constitution’s ranked him as the eighth best athlete in Georgia.

In 2010, Sims took his big play ability to the Capstone. He chose Alabama over Tennessee, Georgia, Florida State, Michigan and Mississippi. With Greg McElroy as the starter and AJ McCarron as backup quarterback, Sims redshirted his freshman season. As a redshirt freshman in 2011, Sims was converted to running back. He saw just five games of action, but was productive none the less. He had 22 carries for 107 yards (4.9 yards per carry), caught two passes for 18 yards and obtained a national title as a member of the team.

In 2012, Sims saw his playing time increase and as a sophomore he returned to backup quarterback. In ten games, Sims ran the ball 30 times for 187 yards and two touchdowns (first collegiate touchdown against Arkansas). In the passing game, he was 5-10 (50 percent of passes completed) passing for 77 yards.

Since McCarron was the starter, Sims didn’t get many reps until toward the end of games. This led to him being more of a runner and relying more on his athleticism than his ability to effectively pass the football. Despite him being on a team that has won back to back national championships, many Alabama fans felt that though Sims is talented, he may not be the best fit to run Saban’s system.

One thing that people give Sims credit for is his perseverance. Nick Saban loves guys that show toughness, perseverance, leadership and do the little things right. When things didn’t go according to plan for Star Jackson and Phillip Sims, they transferred out of the program. As for Blake Sims, he decided to stay at Alabama.

After a capturing its 15th national title in the 2012 season, Alabama entered the offseason with a fierce second-string quarterback battle. Six quarterbacks, including Sims battled for the job. Sims beat out the competition and was able to maintain his position as McCarron’s backup. Though fans were impressed with freshman quarterback, Alec Morris in his ability to drive the ball down field in the spring game, Sims was out to prove that was asset to the team and more than just a runner.

The decision to stay at Alabama along with his consistent work ethic in spring and summer camp has really paid off for Sims thus far in the 2013 season. It was mentioned earlier that in 2012, Sims completed 50 percent of his passes for just 77 yards with a quarterback rating of 114.7.

So far this season, Sims has begun to spin the pigskin to the delight and surprise of many Crimson Tide fans. Sims tossed his first collegiate touchdown pass against Mississippi to Chris Black. For the first time in his career against Georgia State, Sims saw more than just the fourth quarter. Saban allowed him to run the offense in the second half of the game.

Is this history in the making? Is Blake Sims starting to emerge? The answers to these questions remain to be seen. 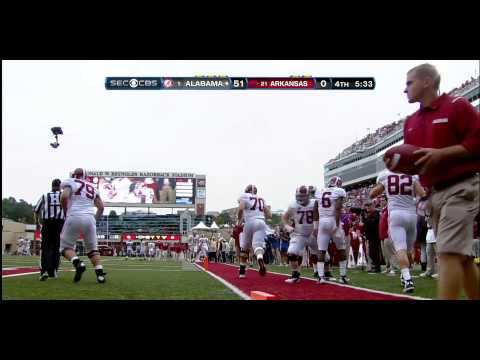