Every Alabama fan has a way of displaying the passion of Crimson Tide football.Whether it’s through song, press releases or interpretive dance, people want their voice to be heard. It’s great to be recognized; however, it’s even better when your work receives positive feedback.

Since landing Nick Saban in 2007, Alabama has accomplished three national titles and two Southeastern Conference titles. Of the attributes that show appreciation to the Crimson Tide and Tuscaloosa as a whole, one individual sheds her light on the city through a canvas.

For Priscilla Wadsworth, capturing the essence of Alabama football is as simple as putting a pencil to paper. At just 24 years old, Wadsworth is a rising star in Tuscaloosa. Though she hasn’t been creating Alabama art long, many have witnessed the talent Wadsworth possesses.

While most people can only dream of meeting the Crimson Tide’s football team, Wadsworth has met the team and has created portraits of Alabama’s most decorative members, including Eddie Lacy, Trent Richardson, Nick Saban and Mal Moore.

Outside of Tuscaloosa, Wadsworth has branded herself well through social media. Wadsworth’s Facebook site, Priscilla Wadsworth Pencil Drawings, has eclipsed 19,280 likes. She also has her own website www.priscillawadsworth.com/ (Priscilla Wadsworth: Crimson Tide Art).

It’s amazing when people are able to showcase their abilities. In Wadsworth’s case, however, she wasn’t always putting masterpieces for Alabama football.

Wadsworth said she started out doing commissions for people and drawing pictures of their children and family members.

“After doing this, it finally dawned on me that I’ve been an [Alabama] fan for a few years,” Wadsworth said. “I thought why not draw what I really love, instead of getting little side jobs here and there. That’s why I decided a little over a year ago that I wanted to draw Alabama football full time,” Wadsworth said.

No matter what you do in life, it’s always good to have a support system behind you. As for Wadsworth, her support has come from Shelia Williams (wife of Bobby Williams-tight end and special teams coach). Williams and Wadsworth have been good friends since she started drawing Crimson Tide Art. Wadsworth looks up to Williams as a mentor.

Williams said it was her husband who became the first fan of Wadsworth’s talent.

“It all started with her [Wadsworth] introduction to my husband,” Williams said. “I must admit that I am the second fan. Coach Williams, who is not very good at Facebook, saw Priscilla’s postings on Facebook and became a fan.”

Williams said her relationship with Wadsworth began when she was able to meet Wadsworth as she was showing her drawings to coach Saban and coach Williams.

“It seems like it’s been a lifetime, but she’s like a daughter to me,” Williams said. “She’s just a talent on the inside and out. It’s been a privilege for me to be able to work with her.”

Mal Moore will always be remembered as the individual who helped usher in the new dynamic of Alabama football.  He persuaded Saban to come to Alabama when it wasn’t the sexiest place to be. Saban took heed and the Crimson Tide has been the cream of the crop since then.

Wadsworth’s portrait of Mal Moore made its debut inside the Paul Bryant Museum this past football season.  Wadsworth said she couldn’t believe her portrait made it into the museum.

“I think that was one of the first milestones after meeting coach Williams in my career,” Wadsworth said. “I was just so happy and I was so glad especially with some of his family members Martha Moore and his sister who really loved the portrait. I was so overwhelmed by the family and being able to have the portrait displayed in the museum,” Wadsworth said.

Williams said she was thrilled that Wadsworth did the portrait.

“She did the portrait during the time when coach Moore was sick,” Williams said. “It just meant more for the University of Alabama as a whole. There are many wonderful portraits and photographs of Mal Moore, but Priscilla puts her heart as an artist in each one of her drawings. For her to have the subject of Mr. Moore at this time is just historical and we are just blessed such a twinkle at the University of Alabama so close by,” Williams said.

Despite not being in Tuscaloosa during the April 2011 tornado, Wadsworth’s portraits have brought joy to the community and continue to help the city heal.  As for football, she has something in common with the Crimson Tide and that is philanthropy.  In two of the Tide’s national titles seasons, Wadsworth portraits captivated the minds of Alabama fans.

Wadsworth said she feels her work has brought life back to Tuscaloosa.

“I get a lot of fans who send messages or emails that say when I look at your work it just brings me to tears,” Wadsworth said. “That really touches me and it’s the best part of being able to do this especially when they send me photographs. For instance, there was a family who sent me a picture of every member holding one of my prints. I felt like I helped heal Tuscaloosa and the city healed me in return,” Wadsworth said.

Wadsworth said she really looks up to the Alabama football athletes.

“I always joke and say it’s my dream to play Alabama football,” Wadsworth said.  “I actually sometimes have dreams about being the kicker, though it will never happen. This isn’t something that I wanted to be a part of because it was big. I am really inspired by Eddie Lacy and everyone else on the team.”

Wadsworth said it’s surreal sometimes as she looks around because though she’s not on the field, she still wants to be able to contribute.

In conclusion, Wadsworth said when she feels confident about a drawing; she puts her full effort into it. As for Wadsworth, one thing is certain. Though Alabama has become a powerhouse in football, Wadsworth has helped the football team and Tuscaloosa become a household name in visual design. 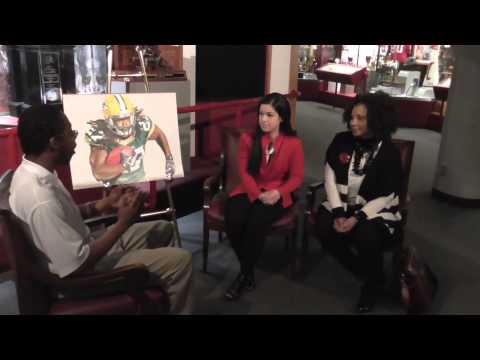