Alabama now turns its attention to Saturday’s matchup with Southern Mississippi, after posting a 41-0 shutout against Florida Atlantic.  Bryant-Denny Stadium is the venue and CBS will air the contest at 5:00 p.m.

Sophomore quarterback Nick Mullens endured some growing pains in 2013. He threw for 1,776 yards and 13 touchdowns, but he also tossed 14 interceptions and averaged a 49.3 percent completion rating.

Kendrick Hardy was a productive running back last season. He posted 417 yards and two touchdowns. Ito Smith has been tapped as Hardy’s replacement. Smith recorded 45 carries for 161 yards in Southern Mississippi’s 26-20 win over Alcorn State.

The Eagles return three of its four play making receivers from 2013. Markese Triplett is the team’s most physical receiver. Triplett stands at 6’4” and collected 33 passes for 558 yards and four scores last season. Marquise Ricard brought in 24 receptions for 306 yards and three touchdowns. Tyre’oune Holmes had 53 catches for 400 yards and two touchdowns in 2013.

Casey Martin and Marquise Ricard were Mullens’s primary targets against Alcorn State. Martin had 11 catches for 95 yards and Ricard totaled 4 receptions for 60 yards and a score.

Defensive back Jacorius Cotton leads the team with 15 tackles. He has two pass breakups and two passes defended. Kalan Reed has seven tackles and two interceptions this season.

Blake Sims and Jake Coker both tossed for 200+ yards. Sims finished with three total touchdowns, while Coker had a touchdown pass to Jalston Fowler. Both quarterbacks are completing over 60 percent of their passes.

The Tide’s running backs worked as a unit against the Owls, but T.J. Yeldon still leads the group with 169 yards rushing and two scores. Derrick Henry is behind Yeldon with 136 rushing yards and a touchdown.

Chris Black and Christion Jones will have to step up another week in DeAndrew White’s absence. Black has four receptions for 53 yards. Jones has 5 receptions for 83 yards.

Alabama is fourth nationally in scoring defense. The Crimson Tide has surrendered 11.5 points per game and 42.5 yards rushing. Alabama has held its opponents to a 29 percent third down conversion rating and hasn’t giving up a rushing touchdown.

Defensive back Landon Collins leads the team with 15 tackles. Linebacker Reggie Ragland has 11 tackles, a sack and a fumble recovery. Cornerback Cyrus Jones has 10 tackles, a pass breakup and a forced fumble. Eddie Jackson recorded four tackles and a forced fumble in his season debut against Florida Atlantic.

What would this contest be without a little history?

One of the greatest plays in college football came from this matchup. Alabama played Southern Miss on Sept. 10, 2005 at Bryant-Denny Stadium. Mike Shula was the Tide’s head coach, Brodie Croyle was its quarterback and Tyrone Prothro was an explosive receiver.

Alabama took an early 10-0 lead in the first quarter. Gerald McRath kept the Golden Eagles in the contest with a 32-yard interception return for a score. A touchdown pass from Dustin Almond to Anthony Perine gave Southern Miss a 14-10 lead to end the first quarter.

The Golden Eagles had all the momentum, until Prothro answered the bell. Alabama trailed Southern Miss 21-10, when Croyle made desperation heave toward the endzone.

The ball looked slightly underthrown, but Prothro adjusted to it. Defensive back Jasper Faulk had his head turned away from the ball. The ball sailed by Faulk’s ear and Prothro recognized it. Prothro clamped his hands onto the ball, put it on the back of Faulk’s neck and rolled with him into the endzone.

Prothro and Faulk wrestled for possession of the ball. The officials ruled in favor of Alabama and the play sparked a comeback.

Le’Ron McClain caught a 1-yard touchdown pass from Croyle. The score brought the game to 21-17 in favor of the Eagles. After two Tim Castille touchdown runs, Alabama regained the lead and won 30-21.

“We [Alabama] have to focus on the tree instead of its shadow,” Saban said.

The quote shocked the media, but for Saban it simply means the Crimson Tide has to develop chemistry with both quarterbacks. It doesn’t matter who is on the field, Saban wants this team to have comradery.

Alabama isn’t overlooking Southern Mississippi, but Florida is next on the schedule. The Crimson Tide aired the ball out against Florida Atlantic. Will it return to establishing the run against the Golden Eagles is the issue?

Six Questions for Alabama this week 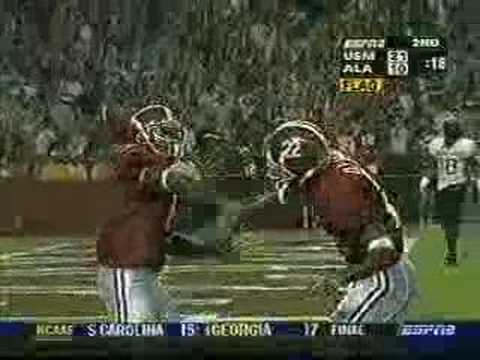