Let the wheat and the tear grow together. The Lord will separate them. Alabama now has to pick up the pieces after a heart-breaking 23-17 loss against Mississippi. The Crimson Tide will travel to Fayetteville, Ark., to face a much improved Arkansas program.

Arkansas is coming off a bye week, but lost to Texas A&M 35-28 in a competitive matchup two weeks ago.

He struggled his first two seasons as a starter, but Brandon Allen finally has it together for the Razorbacks. The junior quarterback is completing 59.8 percent of his passes for 751 yards with nine touchdowns and one interception.

Arkansas pass game is improving, but its foundation starts on the ground. Alex Collins and Jonathan Williams are a dynamic duo. Collins is averaging 7.2 yards per carry. He has 621 yards rushing and six touchdowns on 86 carries. Williams is averaging 7.4 yards per carry. He’s recorded 486 rushing yards and eight scores on 66 carries. Collins and Williams are both power backs, but Korliss Marshall is pure speed.  Marshall has 117 yards rushing and a touchdown this season.

Penalties, turnovers and injuries plagued Alabama in its loss to Mississippi. The Crimson Tide had two turnovers, eight penalties and three injuries.

How will Alabama respond after a loss? Running back T.J. Yeldon addressed the team Saturday in the locker room.

“We aren’t going out like this,” Yeldon said. “Not letting everyone be right about us. From this point on nobody is getting by us. It’s over for them.”

It’s a powerful statement, but it means nothing if the leaders on this team don’t partake in it first.

Blake Sims did some good things against Mississippi, but there were some passes that he could have placed better. He finished 19/31 passing for 228 yards with an interception against the Rebels. Overall, Sims is completing 70.3 percent of his passes for 1,319 yards with eight touchdowns and three interceptions this season.

Yeldon was quiet in production prior to the Ole Miss game, but the junior rushed for 123 yards against the Rebels. Yeldon’s recorded 77 carries for 407 yards and two touchdowns. Derrick Henry didn’t do much against Mississippi, but he is averaging 71.4 rushing yards per game. Henry’s totaled 70 carries for 357 yards and two touchdowns this season.

Amari Cooper anchors Alabama’s receiving corps. He caught nine passes for 91 yards against Mississippi. Cooper has 52 receptions for 746 yards and five scores this season. He is averaging 149.2 receiving yards per game. Christion Jones caught one pass against Ole Miss, but he has 11 receptions for 154 yards this season. Senior receiver DeAndrew White has 12 catches for 121 yards. Tight end O.J. Howard contributed against Mississippi, recording three catches for 81 yards. Howard has five receptions for 103 yards.

2006 was the last season Arkansas defeated Alabama. Mitch Mustain was the Razorbacks’ quarterback, Darren McFadden was its running back and Huston Nutt was its head coach. Arkansas won the contest 24-23.

The best teams in college football are the ones that have a short-term memory. It’s always about the next possession, the next play, the next game. Arkansas is a physical football team. Head coach Bret Bielema and company looks to punch Alabama in the mouth early.

Will Alabama be able to rebound? Saturday has the answer to that question.

In the meantime, here is a table that shows how both teams stack up against each other. 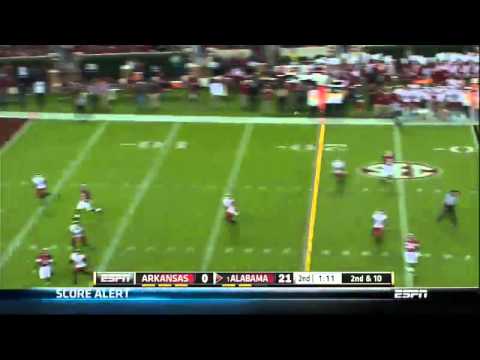