Alabama’s head coach Nick Saban has rejuvenated its football program since landing in Tuscaloosa in 2007. Prior to Saban, Eugene “Gene” Stallings was the lone coach that delivered Alabama to a Southeastern Conference title and a national championship since Paul Bryant.

1992 was a special year for the Crimson Tide. Its offense was guided by Jay Barker, Derrick Lassic and David “The Deuce” Palmer. Defensively, Alabama was anchored by Eric Curry, John Copeland and George Teague. Curry and Copeland were known as the “Bookends,” while Teague was a ball-hawking safety.

Alabama’s defense was dominant during his senior year, as it allowed 9.2 points per game (led nation). He accounted for five interceptions in the regular season, including a crucial takeaway in the Crimson Tide’s 30-21 win over Mississippi State. A 26-yard field goal from Scott Proctor gave Alabama a 23-21 lead with 8:10 remaining in the fourth quarter. The Bulldogs were on the move, until Teague intercepted a pass off quarterback Greg Plump. Alabama’s offense cashed in on the turnover with a touchdown run by Chris Anderson, escaping Starkville, Miss., with a victory.

Alabama finished the 1992 regular season at 12-0. Its defense blanked Auburn (17-0), and cornerback Antonio Langham’s interception secured a 28-21 victory over Florida in the inaugural SEC Championship Game.

The Louisiana Superdome in New Orleans, La., was the Crimson Tide’s next destination. Its competition was the No.1 Miami Hurricanes. Miami was an offensive juggernaut, averaging 33.4 points per game. Its quarterback, Gino Toretta, won the 1992 Heisman Trophy and was viewed as a dynamic passer. Jay Barker had a rough outing, but Alabama’s defense had his back.

The Crimson Tide’s secondary aggravated Toretta. Teague, Tommy Johnson and Sam Shade all registered an interception off Toretta. Teague’s came in the third quarter, after a Derrick Lassic touchdown run. He read Toretta’s eyes, intercepted the pass and returned it for a 31-yard touchdown. Alabama led 27-6, but the best was yet to come.

Toretta decided to dial up a long ball to receiver Larmar Thomas. It appeared to be a definite 88-yard touchdown pass, as Thomas beat Teague off the line of scrimmage. Teague then displays tremendous recovery speed and pulls off one of the greatest plays in Alabama history. He ran down Thomas from behind and stripped the ball away. Teague’s effort was overturned because of an off sides penalty, but the play took Miami out of rhythm.

The Hurricanes were forced to punt three plays later. Teague’s determination got the attention of ABC Sports commentator Keith Jackson. Known for his trademark statement, “Whoa Nellie,” all Jackson said after Teague’s play was “He took the ball away from him. Teague’s got the ball.”

Teague collected 14 interceptions in his tenure at Alabama. He entered the 1993 NFL Draft, in which he was selected by the Green Bay Packers with the 29th overall pick (first round). Teague spent nine seasons (1993-01) in the NFL, playing with Green Bay, Dallas and Miami. He put in 447 tackles, two sacks, five forced fumbles, four fumble recoveries and 15 interceptions. 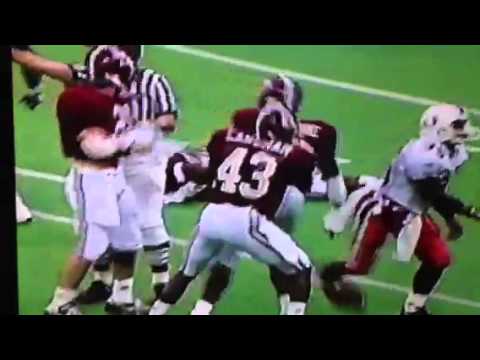