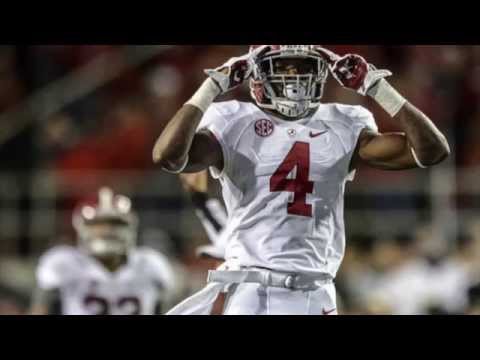 A simple offseason transition has made all the difference for Alabama’s secondary.

The speed and ball skills of defensive backs Eddie Jackson and Geno Matias-Smith have performed wonders at safety. Atlanta and Texas have served as homes away from Bryant-Denny Stadium for the Crimson Tide. Jackson, in particular, anticipates his third productive meeting in Texas this week as Alabama faces Michigan State.

Three of Jackson’s five interceptions (leads Southeastern Conference) have come in the Lone Star state. The junior started this season victimizing Wisconsin quarterback Joel Stave in Alabama’s season opener at AT&T Stadium in Arlington, Texas. His fourth quarter interception off Stave sealed the deal in a 35-17 win for the Crimson Tide.

Jackson and Alabama would return to Texas six weeks later in a top-10 contest against Texas A&M at College Station on Oct. 17. Jackson broke the game open with a 93-yard interception return touchdown off Aggies’ signal-caller Kyle Allen in the second quarter. The Tide took a 28-6 lead into the locker room at halftime. He would later pick off backup quarterback Kyler Murray, resulting in Jackson’s first multi-interception performance of his career. Alabama defeated Texas A&M in a 41-23 blowout victory.

Jackson’s efforts earned him Co-Defensive Player of the Week honors (Minkah Fitzpatrick) from the Football Writers Association of America. His 230 interception return yards stood as the nation’s best for much of the season, according to ESPN.

Georgia quarterback Brice Ramsey was also fooled by Jackson’s deceptive coverage skills. He returned a interception off Ramsey for a 50-yard score in Alabama’s meeting with the Bulldogs on Oct. 3. Sixty percent of Jackson’s damage has occurred in Texas.

Crimson Tide nation expects for Jackson to return in 2016 for his senior year, but his focus is on the Goodyear Cotton Bowl. He caused frustration for Stave, Allen and Murray. Will Michigan State’s Connor Cook be next? Jackson should answer this on Thursday night.