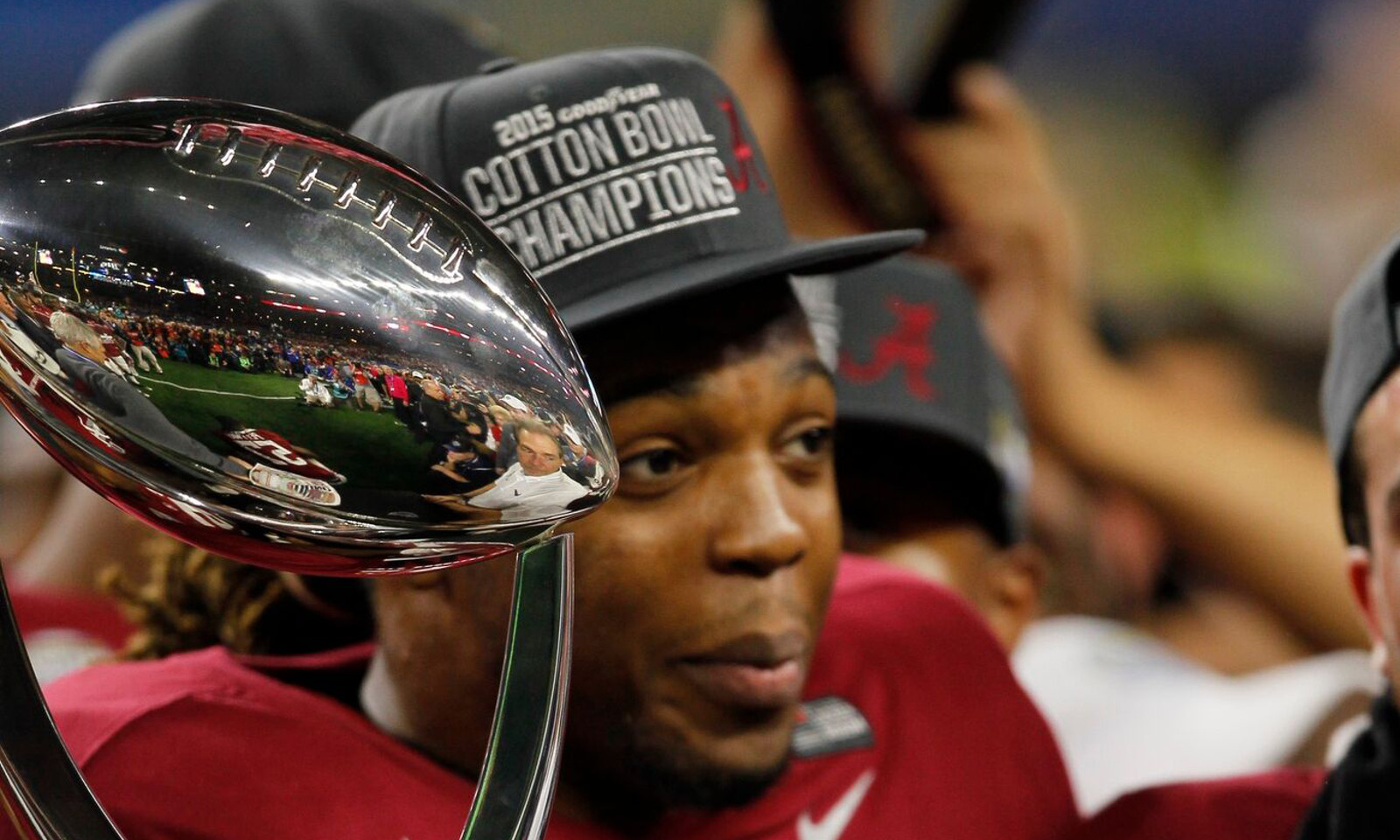 A domination of epic proportion occurred Thursday night in the Goodyear Cotton Bowl. Alabama head coach Nick Saban and the Crimson Tide shutout Michigan State 38-0 inside AT&T Stadium in Arlington, Texas. The Spartans limited running back Derrick Henry to 75 yards rushing; however, its defense had no answers for senior quarterback Jacob Coker.

He completed 25 of 30 passes (83.3 percent) for 286 yards with two touchdowns and no turnovers. Alabama’s defense stifled Michigan State, allowing 239 yards of total offense.

Yours truly of Touchdown Alabama Magazine reveals the grades for Alabama from the Cotton Bowl.

Alabama specialists JK Scott and Adam Griffith both excelled against Michigan State. Scott accounted for six punts, netting an average of 46.5 yards. He had a long of 56 yards and dropped four of his six attempts inside the 20-yard line.

Griffith nailed his lone field goal of the game, a 47-yard try in the second quarter. He averaged 63.3 yards on kickoffs, with five of his seven boots resulting in touchbacks. Cornerback Cyrus Jones recorded five punt returns for 80 yards, including a 57-yard return for a touchdown in the third quarter.

Two penalties and two sacks did not hinder Alabama’s offensive line from holding its own against the Spartans.

Quarterback Jacob Coker had time to set his field and target receivers downfield. The Crimson Tide came into Thursday’s game averaging 422.5 yards on offense. It accounted for 440 against Michigan State, with 174 yards coming on the ground.

Michigan State quarterback Connor Cook got pounded by Alabama’s front seven all game long. He was sacked four times and completed 19 of 39 pass attempts, which is 48.7 percent.

Burbridge, Macgarrett Kings and Josiah Price were all kept in check, combining for nine receptions for 105 yards.

Cook led a potential scoring drive with two minutes left in the second quarter, but the Spartans’ were denied by Alabama cornerback Cyrus Jones. He intercepted a pass off Cook at the one-yard line, preserving a 10-0 shutout going into halftime.

Safety Geno Matias-Smith led the secondary with four total tackles, while Jones and Eddie Jackson each had three.

All three of Jackson’s tackles were unassisted.

Freshman Calvin Ridley owned the Cotton Bowl stage. He brought in eight passes for 138 yards and two touchdowns. Both of his scores came in the third quarter on catches of 11 and 50 yards. Two of his eight catches resulted in 50 yards.

He stepped up and had a productive game, accounting for 59 yards on three receptions. Wide receiver ArDarius Stewart caught seven passes for 37 yards, while Richard Mullaney hauled in three catches for 53 yards.

He became the first back in Southeastern Conference history to rush for 2,000 yards in a single season, 2,061 yards.

Henry chimed in with two touchdowns, extending his scoring streak to 19 straight games. His 25 rushing touchdowns places him first in conference history for most scores in a season.

Offensive coordinator Lane Kiffin knew the Spartans were sold on stopping Henry, so he decided to put the game in the hands of Jacob Coker. The senior was efficient and confident in his approaching of spreading the ball. Both of his touchdown passes went to Calvin Ridley. Coker out shined Connor Cook.

Turnovers and negative plays were not an issue for Coker at AT&T Stadium. The same venue that saw him complete 71.4 percent of his passes in week one, returned only to see an 83.3 percentage output on a College Football Playoff stage.

Alabama walked away empty handed last season, but now it will face No.1-ranked Clemson for a national championship.

University of Phoenix Stadium (Glendale, Ariz.) will be the venue for a epic SEC vs. ACC battle on Jan. 11.