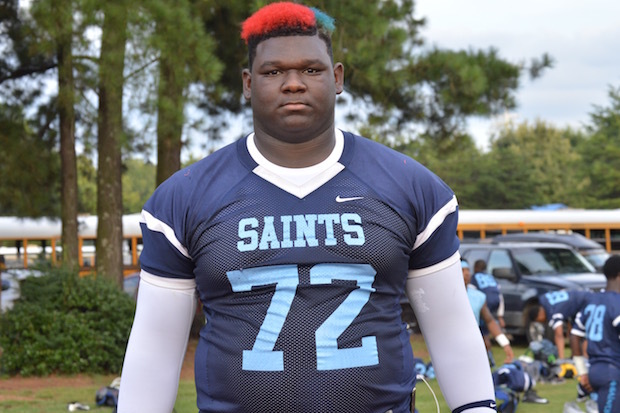 At 6’4″, 350 pounds, Netori Johnson is your ideal offensive guard at the next level and for eight months was a gem in Alabama’s loaded 2017 recruiting class.

Along with his size making him hard to miss on he field, Johnson is also known for his colorful hair, which is normally dyed in two different colors. And not to mention, he’s a pretty great offensive guard, being ranked as the No.4 guard in the class and that is well deserved. Johnson plays with a certain nastiness and power that led to 20 plus offers from powerhouse college football programs.

After being committed to the Crimson Tide since June 1, Johnson decided it was in his best interest to decommit from the Tide in February and open up his recruitment to visit his other options, with Alabama still in play. He announced that via Twitter.

As spring ball ends and the camp circuits and summer workouts beginning, Johnson has announced that he has made his final decision with his recruitment. The Ellenwood, Ga. native will stay in his home state and play for Kirby Smart and the Georgia Bulldogs.

With the addition of Johnson, the Bulldogs now have eight commits in the 2017 class, which includes former Alabama quarterback commit Jake Fromm.

With Kirby Smart in Athens, Georgia is already becoming a recruiting rival for the Tide and with the inaugural 2017 class of Kirby Smart being ranked No.2 in the SEC behind Alabama, it can only get more interesting from here.

Justin Wagner is the Lead Recruiting Analyst for Touchdown Alabama Magazine. You can follow him on Twitter at @jwag718.[/ihc-hide-content]