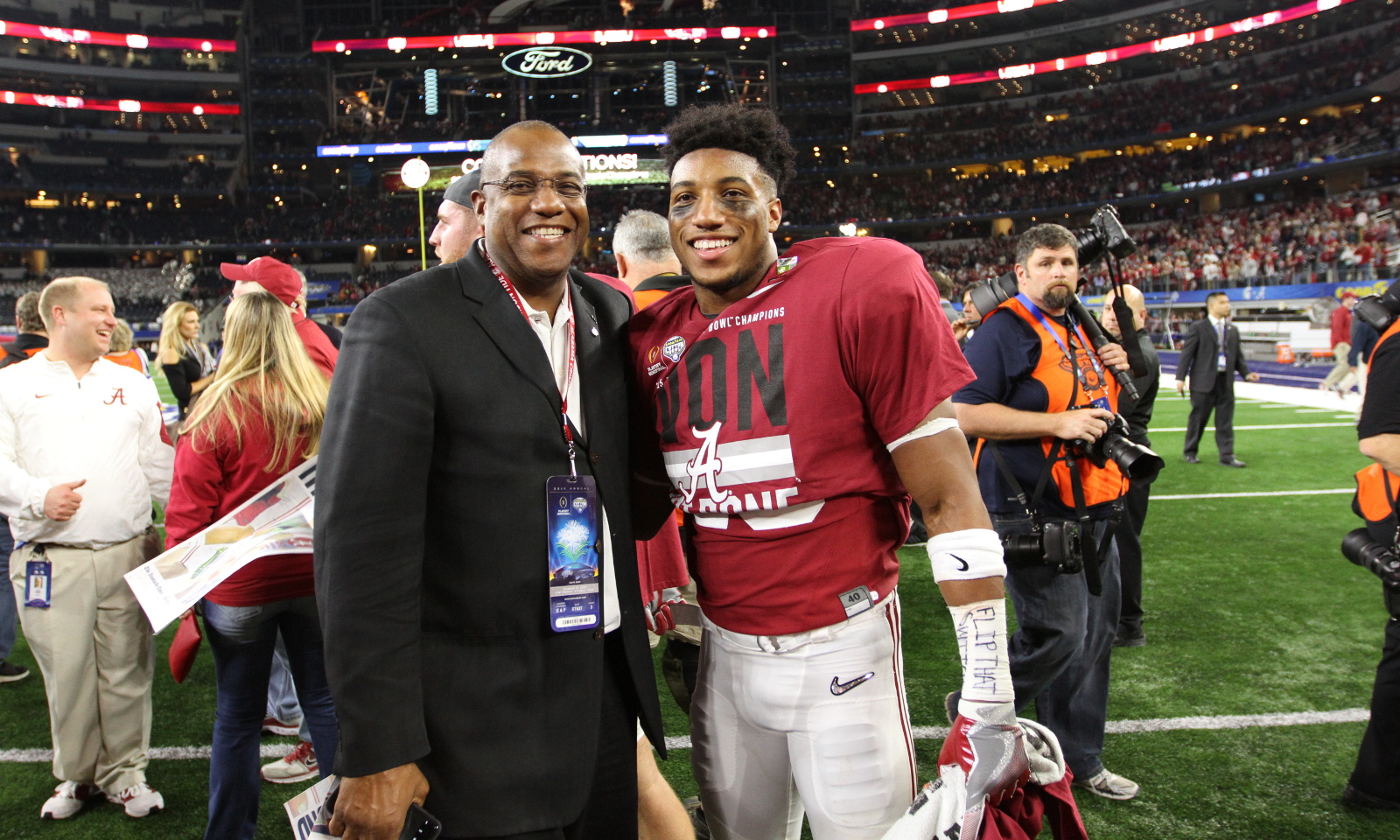 Being the offspring of a decorative college football player is not easy, but Marlon Humphrey is taking it one step at a time. The Alabama cornerback happens to be the son of former Crimson Tide running back, Bobby Humphrey. Humphrey, who attended the University of Alabama from 1985-88, recorded 4,958 all-purpose yards and 40 total touchdowns in his four-year career.

He set the school’s single-season rushing mark in 1986, when he collected 1,471 yards and 15 touchdowns on 236 carries. Humphrey was a two-time All-American selection (1986-87), while being UPI’s Offensive Player of the Year and finishing 10th overall in the 1987 Heisman voting.

He obtained these numbers in all 15 games as a redshirt freshman; however, his finest moment came on special teams. Humphrey recovered a perfectly executed onside kick in the fourth quarter against top-ranked Clemson in the 2016 College Football Playoff national title game.

With Cyrus Jones gone and Minkah Fitzpatrick grabbing much attention, Humphrey will be tested a lot by quarterbacks this season. A graduate of Hoover (Ala.) High School, Humphrey enrolled at Alabama as a consensus five-star recruit. He was credited with 31 pass breakups and 13 interceptions (three returned for scores) in his career, on top of being a solid track athlete.

Despite Fitzpatrick accounting for three defensive touchdowns in 2015, Humphrey got the nod to be on Phil Steele’s 2016 preseason All-American team (third team). The 6-foot-1, 198-pound defender is also on Steele’s top 47 draft eligible corners for 2017, coming in at No. 8.

Humphrey is one of 10 Tide players on a preseason award watch list. He joins Jonathan Allen, Tim Williams, Reuben Foster and Eddie Jackson as the fifth player on Bronko Nagurski watch.

He possesses quality top-end and recovery speed along with ball skills, but attention to the ball in press coverage is something he must improve on. Humphrey’s ability to adjust will be tested for a third time, as he will learn under a new defensive backs coach. Prior to being hired at Georgia, Kirby Smart ran the secondary in 2014—Humphrey’s redshirt year as a freshman. He developed into being a playmaker last season under first-year coach Mel Tucker and now, a familiar face returns to Tuscaloosa in Derrick Ansley. Ansley served on Nick Saban’s staff from 2010-11.

Former Alabama defensive end D.J. Pettway is not worried at all about Humphrey’s growth heading into the fall. He said the redshirt sophomore has been blessed with “natural abilities.”

“I saw everything from him,” Pettway said. “He has the whole package and he always proved to me that he can come downhill when he needs to.”

As far as his character goes, Pettway said Humphrey is a “great guy” and “he showed a lot of maturity from freshman to sophomore year.” Maturity will be of the essence in Alabama’s secondary with Fitzpatrick, Eddie Jackson, Ronnie Harrison, Tony Brown and Laurence “Hootie” Jones all returning.

“Every coach brings something new to the table and also coach Saban deals with them a lot so most of it is the same stuff each year.”