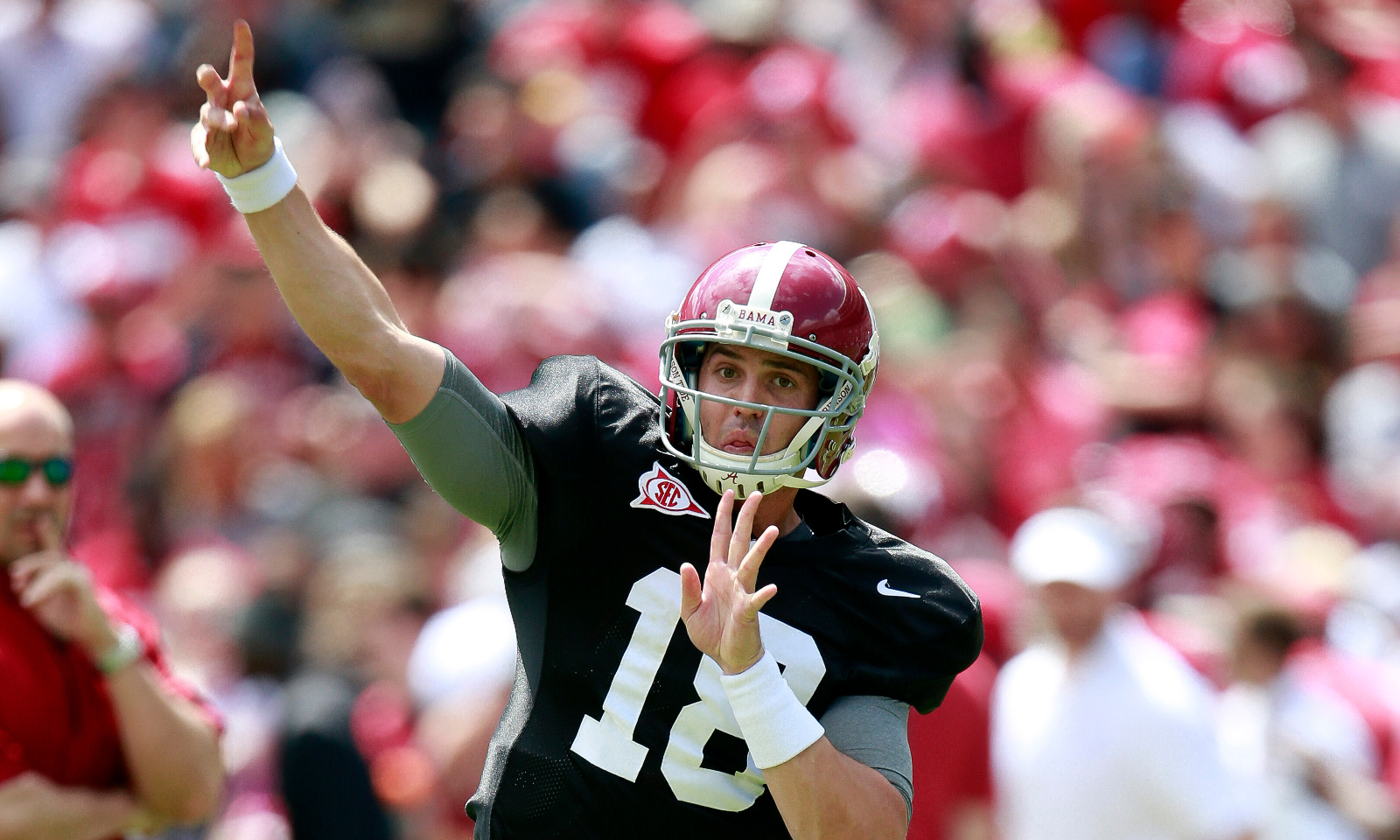 Alabama fans are one step closer to seeing who the starting quarterback will be. All that remains is determining which player will enter the huddle first on Saturday against Southern California.

Head coach Nick Saban would rather keep one guessing than reveal his thoughts, but during his presser on Monday, he narrowed the quarterback race down to two contestants.

Cooper Bateman and Blake Barnett received much of the reps this week, as both will see field time against the Trojans at AT&T Stadium. Bateman (redshirt junior) is in his fourth season with the team, while Barnett (redshirt freshman) enters his second year under offensive coordinator Lane Kiffin.

It’s a hard character trait to practice; however, it is usually the patient ones that Saban rewards with playing time. Ex-Crimson Tide signal callers John Parker Wilson, Greg McElroy, AJ McCarron, Blake Sims and Jacob Coker all endured the same route. With everything pointing toward this trend, Saturday’s game could very well see Bateman break the huddle as the starter.

Listed below are five advantages for Alabama, if Bateman gets the start against USC.

He’s done it throughout his career as an offensive coordinator and head coach, but in his first two seasons at Alabama, Kiffin has proven that he can work with any type of quarterback.

The 41-year-old molded Blake Sims into a Southeastern Conference champion and the school’s single season passing leader (3,487 yards) in one year as a starter. He would follow up that effort in 2015, taking Jacob Coker from a backup quarterback to team captain and a national champion.

Kiffin balanced the Tide’s offense with both guys, coaching the unit to 30-plus points and over 400 yards per game. Bateman’s combination of footwork and short passes could take Kiffin back to the offense that was run with Sims, displaying quick reads and run/pass option schemes.

4. Adjusting to the defense/calling audibles

Much of Southern California’s defensive alignment will come from its secondary.

The Trojans lost three linemen and a linebacker (Su’a Cravens) to the National Football League, and sophomore linebacker Osa Masina has been suspended for Saturday’s game due to off-field issues.

Redshirt junior Bradley Bozeman has been appointed the job at center, nevertheless, Bateman’s study of defenses should help him check to the right calls on the field. USC’s defensive coordinator Clancy Pendergast is going to find way to generate negative plays—despite a lack of depth, but for Bateman, it will be on him to make sure the protection calls in both run and pass game go smoothly.

Coach Saban is going to want to establish the run game. For the Tide, it’s more so about easing the quarterback into the action with a mixture of runs and short passes to the outside.

Bateman tends to excel more on short to intermediate throws, displaying a tight spiral and accuracy on such passes. Though Kiffin is known for dialing up deep ball/timing pattern downfield, he will dink and dunk with USC—until he feels the need to draw up something.

At one point, Bateman’s athleticism nearly transitioned him from quarterback to receiver.

He’s got speed on the perimeter and despite being nervous last year, the redshirt junior does provide Alabama a viable read option look. He was clocked at 4.59 seconds in the 40-yard during spring testing; a time that was two tenths of a second slower than Blake Sims at the NFL Scouting Combine (4.57 seconds, 2015).

This is what it all boils down to for Saban; a combination of how mature one is and how knowledgeable one is to run an offense. Bateman is the lone quarterback on the roster that has seen meaningful snaps in a game. Alabama lost in the one contest he started against Ole Miss in 2015, but it was valuable experience for him. He did, however, record a touchdown pass in the game.

Saban is all for talent and intangibles, but he also wants for his guys to know what they are doing. A big part of excelling in your role is understanding the scheme given to your position group.

Three of Alabama’s four first-year starting quarterbacks (AJ McCarron, 2010- redshirt sophomore) were upperclassmen. Bateman has paid his dues in learning the offense, being around the team and immersing himself within the culture that is Crimson Tide football.

He’s been a part of two Southeastern Conference championships and a national title as a backup, but on Saturday, Bateman will more than likely take the field first to open the Tide’s 2016 season.