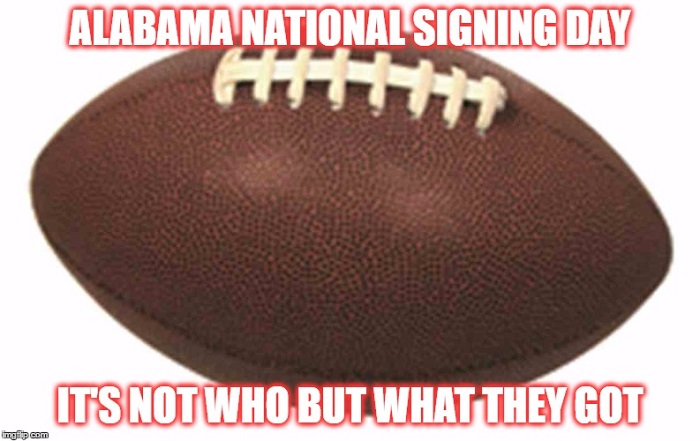 It’s easy for Alabama fans to celebrate another signing day win, but it’s not just winning the highest rated players, but the ones Saban wanted. Ready why.

It’s Not About Winning National Signing Day For Saban, But Something Else

If you think that Saban just wants to win National Signing Day’s top class every year because he wants to win everything he does, then you don’t understand everything.

Yes, he does want to win the title, because yes, he does want to win at everything he does like you think, but it’s not about who he gets to win that title, but what he gets. To better explain, Saban knows winning the signing day title would be easy simply by going after all the top recruits with the highest stars, but he wants players that will fit his schemes, stay eligible by being a good student in class, buy into his process and stay out of trouble, stay in the weight and training rooms and realize that the player needs the team more than the team needs the player.

Yes, Saban will pass on a 5 star prima dona, he’ll pass on a player that thinks he already knows everything or one that makes demands. Saban would more than gladly sign a two or three star with tons of upside, humility and drive than any like the example given above who isn’t all that.

No coach has come close to Saban’s prowess in recruiting. His last nine classes in a row have no equal in the history of college football. Just when you think he can’t get a better class, here comes the next one. How does he do it?

The answer has multi answers. Yes Alabama has a name, history and program that would attract some of the better athletes just for that part. Then there is the NFL pipeline and the fact that lately the road to the playoffs go through Alabama, but Saban is the consummate salesman and he sells much more than Alabama and that tradition. Past interviews with players like Dont’a Hightower told me that, “Coach doesn’t bullsh*t you. He doesn’t make promises he can’t keep. He doesn’t promise playing time or depth chart positions, he promises opportunities. You get what you earn.” he said.

When I asked if too much talent on the team might keep some from coming here in fear of riding the bench, Hightower said, “Coach told us if you’re scared of competition, this isn’t the place for you. But if you’re scared of competition that will show up wherever you go. Here, you play with the best everyday in practice. There is no team you’ll fear after going through that everyday.”

And when Saban sells to the parents, he doesn’t shovel manure there either. His insistence for classroom excellence and outstanding graduation is among the nation’s leaders.

Then there are the players that Saban finds that somehow slipped under top program’s radar that turn out to be as valued as the top 5 star studs. Just this past season if you told the fan base, or most in the press including me, that never foresaw freshman Joshua Jacobs would have served such an important role in the running back stable this past season, I would not have believed it, but somehow, under it’s not all about the stars, but the man behind them.

While every coach, including Saban, can’t find every diamond in the rough, he sure seems to mine a lot of them.

So as Alabama fans relish in yet another top signing class, they should look beyond the shiny paint of that runaway train and take solace in the fact that there’s so much more to that class under the surface. They’re not just top rated players who earned those stars under someone else’s opinion, they’re Saban picked players and there’s something else to them than just  stars.