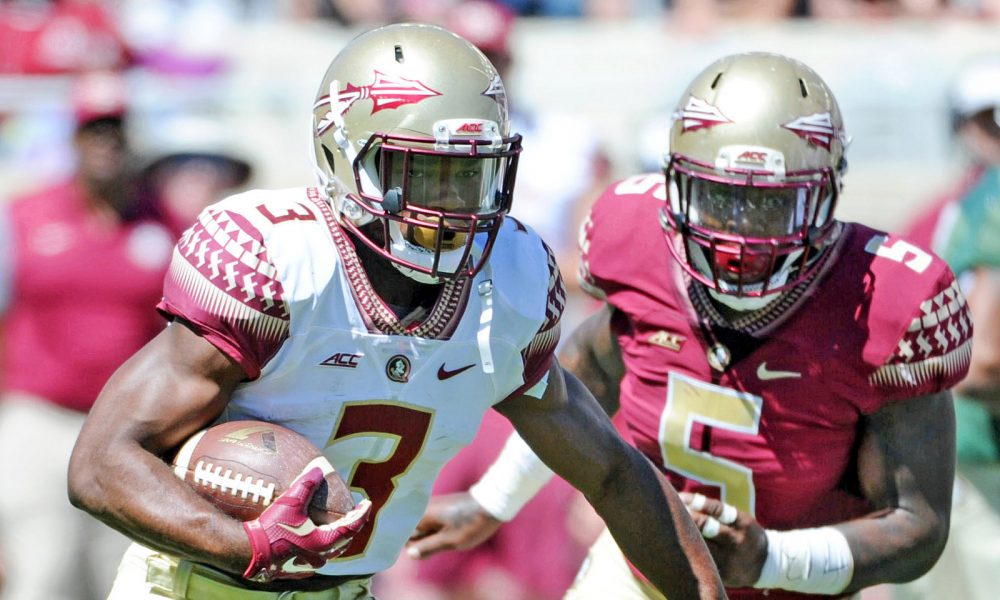 If one was to remove today and all weekends from view, then we would be 41 days away from the start of the 2017 college football season. With high expectations waiting for week one, the Alabama-Florida State game will be on everyone’s DVR upon kickoff on Saturday, Sept. 2.

Alabama has been focused all offseason on getting back to the College Football Playoff National Championship, but it must get by Florida State in order to have a chance. Both schools return marquee players in all three phases, and before we get into the Crimson Tide, yours truly looks at the Seminoles first.

Top 5 Seminoles to watch for (no special order)

Well, let’s try having two marquee signal callers kick off the next season. Deondre Francois of Florida State will go head-to-head versus Jalen Hurts of Alabama in Atlanta to start the fall. He was tested by Mississippi’s  “Land shark” defense to start 2016, but Francois pulled through and ended the year with 3,350 passing yards and 25 total touchdowns to seven interceptions.

As the reigning Offensive Rookie of the Year in the Atlantic Coast Conference, Francois recorded five 300-yard passing games in 13 starts – 38.5 percent. For an Alabama secondary that graduated both cornerback Marlon Humphrey and safety Eddie Jackson to the National Football League, the Seminoles will take shots in the passing game and Francois has a big-time arm.

Inside a battle that features two athletic quarterbacks, NFL scouts will also be on hand to dissect two first-round defensive backs in Minkah Fitzpatrick of Alabama and Tarvarus McFadden of Florida State.

McFadden, 6-2 and 198 pounds, tied for an NCAA-best eight interceptions through 13 games. He carried a team-high in that department, along with having six pass breakups, three tackles for loss and 20 total tackles.

With his size, McFadden can force receivers to the sideline and attack the football at its highest point. All eight of his takeaways came against some of the top quarterbacks in the country, including Chad Kelly (Ole Miss), Deshaun Watson (Clemson), reigning Heisman winner Lamar Jackson (Louisville) and Brad Kaaya (Miami).

McFadden was a finalist for the Bronko Nagurski Award, and received honors as first team All-American and All-ACC. He was also awarded the Jack Tatum Trophy, which is presented to the nation’s top defensive back from the Touchdown Club of Columbus.

He will be the successor to Dalvin Cook, and his first taste of college action will come against a program that was high on his radar during his recruitment – Alabama. Cam Akers, a native of Clinton, Miss., was one of the nation’s most sought-after players in the 2017 recruiting cycle.

He garnered five-star ratings from 247Sports Composite, and was the top-rated running back according to 247Sports, 247Sports Composite and ESPN 300 recruiting networks. Akers dominated Class 6A football in Mississippi, as he delivered Clinton High School to a state title in 2016. Playing at both quarterback and running back, the 213-pound specimen amassed 13,243 yards of offense with 149 touchdowns in four years.

He would post 5,103 yards rushing and 71 scores, while accounting for 2,105 yards rushing and 34 scores as a senior. A two-time All-State selection (2015-16), Akers earned Mississippi’s “Mr. Football” honors for Class 6A and was the state’s Gatorade Player of the Year in 2016. After witnessing Dalvin Cook register three consecutive 1,000-yard seasons (2014-16), it’s now time to watch Akers emerge.

He rushed for 87 yards on 10 carries in Florida State’s spring game.

He collected 9.5 sacks in 2016, which led all freshmen nationally. This output delivered him Freshman All-American honors and despite being undersized (6’5″ and 218 pounds), Burns makes up for weight by having a lot of quickness.

He was one of the team leaders in tackles for loss (10.5), while totaling 24 tackles, a forced fumble and a quarterback hurry through 13 games. Seeing that Alabama graduated Cam Robinson to the NFL, Burns will more than likely be matched up on either sophomore Jonah Williams or redshirt sophomore Matt Womack.

Williams, who started all 15 games at right tackle last season, assisted Jalen Hurts to 2,780 passing yards, 954 rushing yards and 36 total touchdowns. Washington, Clemson, LSU and Ole Miss (first half) had the most success disrupting the timing of the Crimson Tide’s offense with getting pressure to Hurts. Explosion off the ball and frustrating offensive linemen will be primary factors in Burns’ push to create negative plays.

There is a distinct reason as to why he is on this list.

Ricky Aguayo comes from a family of soccer players, but more importantly, his older brother (Robert Aguayo) etched his name in stone as a kicking legend at Florida State. The elder Aguayo nailed over 80 percent of his field goals and was perfect on 198 extra points attempts in three seasons with the Seminoles. Robert Aguayo finished his career as a three-time All-American and Lou Groza (nation’s top kicker) in 2013, after nailing 21 of 22 field goals and all 94 PAT tries.

Ricky Aguayo made 19 of 26 field goals last season, including 12 from inside 40 yards. He would miss one extra point in 52 attempts, as his 52nd try was blocked in the Orange Bowl against the Michigan Wolverines.

Should this year’s season opener come down to a field goal, FSU has a proven guy.