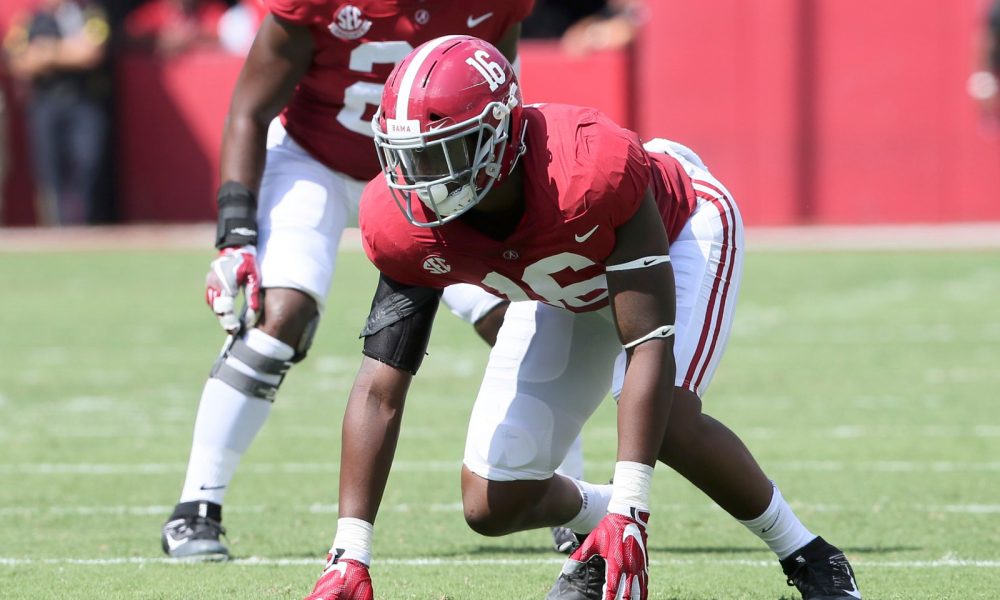 Seeing cameras and recorders in front of Jamey Mosley seems weird at first, but one would know why he embraced the moment – especially after emerging from where he once stood.

The redshirt junior linebacker from Theodore (Ala.) High School made his career debut as a starter in the Tide’s base 3-4 defense, lining up on the strong side.

As one of five first-time starters, Mosley held his own with two total tackles. He made a critical third down stop in the red zone during the first quarter, forcing quarterback Chason Virgil out-of-bounds for no gain.

Mosley’s effort, which came on Fresno State’s second drive, held the team to a field goal.

Regardless of being aided by two Alabama penalties, effective screen passes and positive yardage from Ronnie Rivers got the Bulldogs into Crimson Tide territory on that possession.

Should Virgil had picked up the first down, Fresno State possibly reaches the end zone later in the drive. However, Mosley trusted his instincts to maintain leverage on the outside and was able to prevent Virgil from moving the chains.

He was always around the football throughout the game, and helped the Tide limit it’s Mountain West Conference opponent to 58 yards rushing on 22 carries. Before earning an athletic scholarship last summer, Mosley spent all of 2014 and 2015 as a walk-on.

The younger brother of former Alabama football linebacker and current Baltimore Raven, C.J. Mosley, Jamey’s added 62 pounds to his 6-foot-5 frame (188 to 250) and was vying for the starting role at SAM linebacker a season ago prior to falling short. It was a push for him to get to this moment, and per Jamey it has been the communication with C.J. that’s helped him.

“I actually talked with C.J. before the game,” Mosley said. “I talk to him before every game. He always tells me to just do my job, control what I can control and just go out there and play ball.”

Even more impressive than his work ethic, upbringing and passion for the game was some of the responses he provided to the questions addressed to him. A lot of major four and five-star prospects do not like to wait on their time to be a factor. Upon being asked on if he was worried or if it frustrated him to be patient, Mosley’s rebuttal carried humility and a veteran’s confidence.

“It wasn’t tough at all,” he said. “Any blessing comes with a burden. You know what you are getting into coming here. I was just ready for the opportunity.”

Levi Wallace and Scott Meyer both joined Mosley as former walk-ons that are now scholarship starters in the secondary and on special teams.

In speaking for all three guys (including himself), Mosley said hard work pays off.

“Levi is a great athlete and great person,” he said.

“If you can play football, you will play. You can’t deny talent. Levi is a great talent and Levi and I have been good friends on and off the field.”

After witnessing his brother grace fans with huge plays, win numerous awards and becoming a first-round NFL Draft pick, Jamey Mosley said he knew Alabama was home for him since the sixth grade.

“This was the place where I felt comfortable,” he said.

Much like C.J., Jamey Mosley speaks softly and carries a big stick.

His evaluation of his game versus Fresno State was ‘decent,’ but he knows there is room for improvement.

“I need to watch the film and see how I can be better for next week,” he said.

Next week, the Tide will remain in Tuscaloosa to host Colorado State.