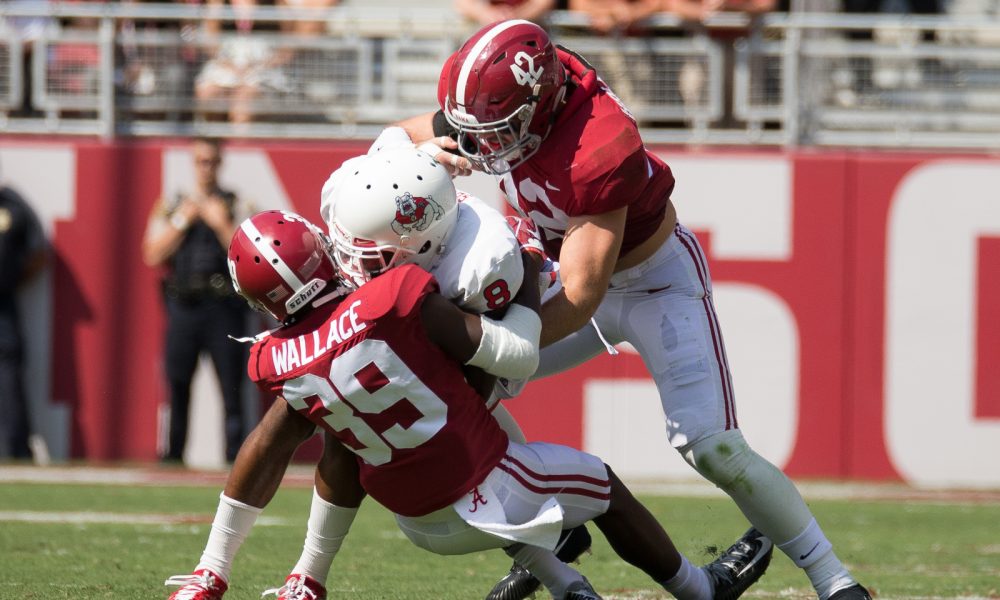 When one buys into Nick Saban, earns the adoration of teammates and plays with a sense of urgency, an opportunity to start or get increased playing time is never too far behind.

Keith Holcombe, a junior, is experiencing this as he could start in his second consecutive game – especially if Rashaan Evans does not suit up on Saturday.

A groin injury against Florida State sidelined Evans and forced Holcombe into action during the second half. He recorded a fumble recovery on special teams, which was caused via tackle from freshman Dylan Moses.

After being announced in the starting lineups versus Fresno State, the Tuscaloosa native made it a priority to get secure tackles. Holcombe finished as one the team leaders in the department, turning in seven total stops and a pass breakup in the Crimson Tide’s 41-10 win.

He’s been in the system for four years (since 2014), and though Holcombe has showed promise in being a stalwart on special teams, the natural headhunter wants to be a factor on defense.

Before traveling six miles to the University of Alabama campus for the 2014 signing class, Holcombe was a blue-collar athlete at Hillcrest High School.

Earning the status of a four-star prospect, he was listed at No. 281 in the ESPN 300 recruiting database.

Despite totaling 128 tackles in his senior season, he decided his redshirt his true freshman campaign. Prior to this year, Holcombe’s biggest play came in the 2015 Southeastern Conference Championship Game where he blocked a punt out the back of the end zone for a safety.

His efforts would help the Tide capture a national championship.

San Francisco’s rookie linebacker Reuben Foster was one of few players that saw something special in Holcombe before getting selected in this year’s NFL Draft.

According to a report in AL.com, the 2016 Dick Butkus Award winner called Holcombe a whole ‘nother animal.

“He’s just got one speed,” Foster said. “He motivates me. He’s got one speed. He doesn’t let nothing get him down. I’ve never seen someone like that.”

Holcombe has worked at inside/weak-side backer all four seasons at Alabama, including the last two years with defensive coordinator Jeremy Pruitt.

He now prepares to be even better against Colorado State, which is scheduled for this weekend at 6:00 p.m. (CT) at Bryant-Denny Stadium.