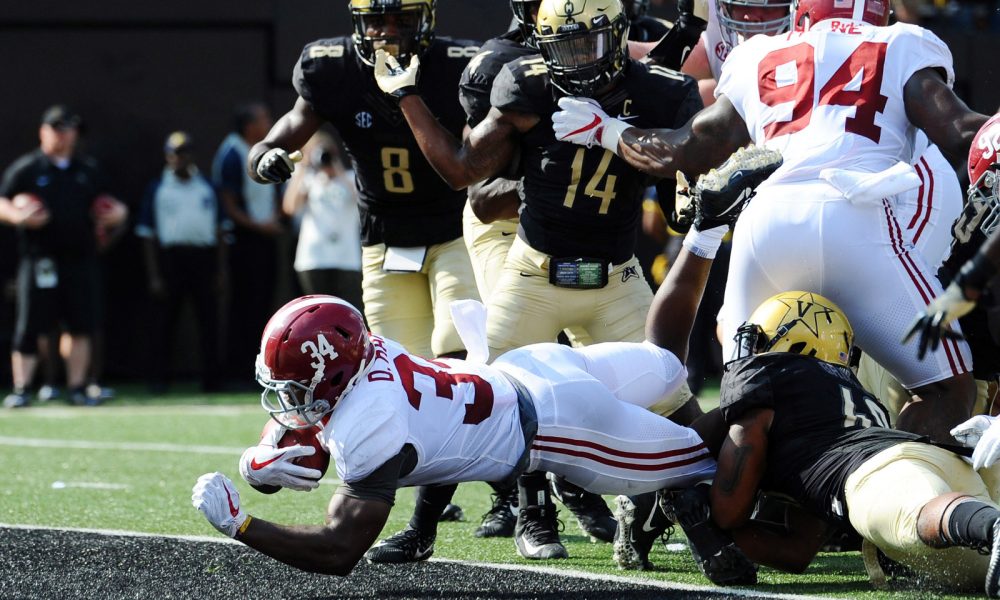 NASHVILLE – After all the hype provided from defensive lineman Nifae Lealao and Vanderbilt’s fan base, Alabama’s run game and defense carried it to a 31-0 lead.

Both Damien Harris and Bo Scarbrough set the tone, as Harris leads the duo with 109 rushing yards and two touchdowns on nine attempts – including a 61-yard burst to the end zone.

Scarbrough, on the other hand, averaged eight yards per carry with two scores.

Sophomore quarterback Jalen Hurts has not had to do much; however, he did complete eight of 13 pass attempts for 74 yards, with three balls going to wide receiver Calvin Ridley.

Andy Pappanastos added a 31-yard field goal late in the first half, which makes eight of 10 for this season – including six straight made kicks.  Prior to today, the Commodores’ defense gave up points in the red zone just 25 percent of the time. Alabama scored on all four of its red zone opportunities.

Defensively, the Crimson Tide has limited Vanderbilt to 49 yards offensively.

Kyle Shurmur, who entered today’s matchup as the Southeastern Conference’s leader in passing efficieny, completed just three of 13 passes for 17 yards and an interception. The Commodores have been held to 32 yards rushing, with Ralph Webb accounting for 18 yards on five carries.

Anthony Averett leads Alabama in tackles (three), while Shaun Dion Hamilton, Anfernee Jennings and Isaiah Buggs each have two. Safety Ronnie Harrison has the lone turnover of the game, picking off Shurmur in the first quarter for his second pick of the season.

Despite wanting to see Hurts complete more passes in the second half, the Crimson Tide’s offense outgained Vanderbilt 323-49. A healthy Rashaan Evans has been the difference on defense, as Alabama was ferocious in its pursuit of Shurmur and forced two turnovers.