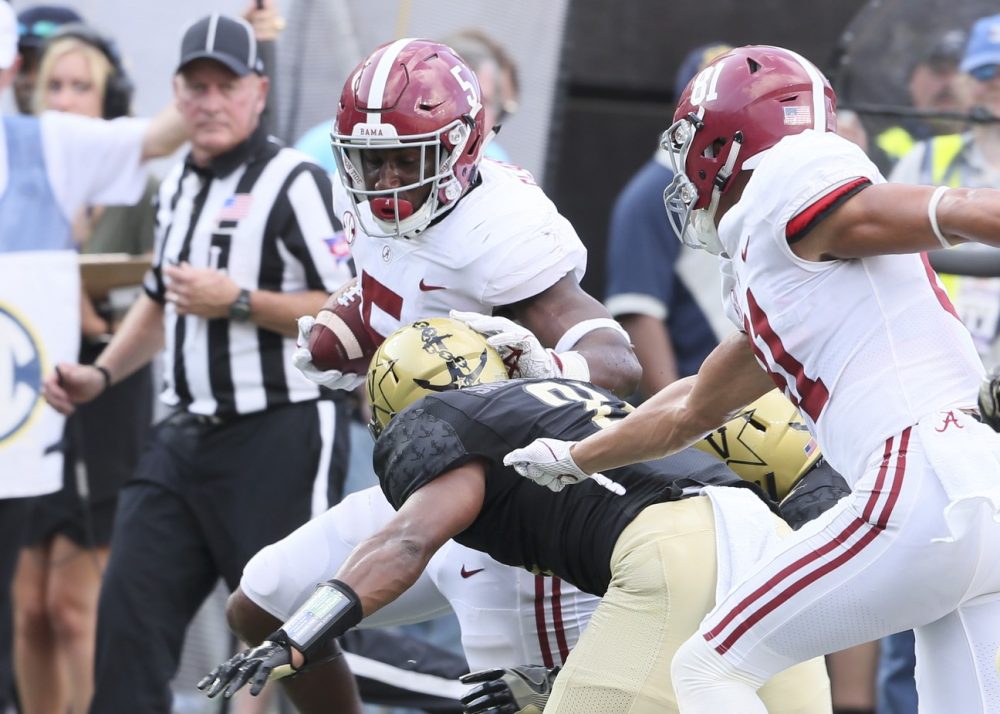 They say that you can make an argument for both sides of a particular issue by using statistics, but these numbers tell us a lot and here’s what they’re saying through the first four games…

For Alabama Fans, Here Are Some Numbers of Interest

They say that you can make an argument for both sides of a particular issue by using statistics, but these numbers tell us a lot and here’s what they’re saying through the first four games…

Damien Harris is still the man. He is the first string workhorse he was all last season. He is the guy who racks up the most yards per carry over the rest as he did last season and yet he still doesn’t get the hype and air time talk that Bo Scarbrough gets. While it’s nice to have Bo as a quality backup, can the media finally get behind singing the great work of the man who’s been the real master at running back now for a year and a third?

It’s great to have a quality backup, but when you figure in the running yards per attempt, anybody that says Tua should start over Hurts has no logic or understanding of football. Jalen Hurts is the man at quarterback.

What this means is HOLY COW! Is this team deep at receiver? Just throw it to anybody! When a whole team averages almost 12 yards a catch, just throw the darn thing and complete it. This team is absolutely full of running backs, tight ends and receivers who can catch the ball and know what to do with it once they’ve caught it.

What all this means as a whole –

Here’s another HOLY COW! moment. You have two quarterbacks averaging about 65% completion ratios and when they complete a pass it goes for an average of almost 12 yards, a first down on most any chart. But if that weren’t enough, they could just hand off twice in a series and gain another 13 yards in those two runs on average.

This is an offensive juggernaut that is just now coming together and getting into a rhythm. Once it really gets clicking is there anyone who can stop it?

Keep in mind they accumulated these stats against two teams of the four they’ve played so far that were national leaders in total defense. So it hasn’t been all against cremepuff competition by any stretch of the imagination.

And if that weren’t enough, combine that to a nationally leading defense only allowing an average of 10 points a game. And that was while they were working through major injuries at linebacker and breaking in replacements. This too is a defense in a state of progress and God help the teams they play once they too get to be a well oiled soul stomping unit.

This is a team doing almost everything right and still just showing glimpses of what they’re evolving into. They are the best team in the nation and only getting better, more cohesive and more confident. Folks, this could be a team that could play in the NFL at season’s end. Yes, that’s been said before, but watching this team grow, this could be the team that actually could.

After all, the numbers don’t lie do they?