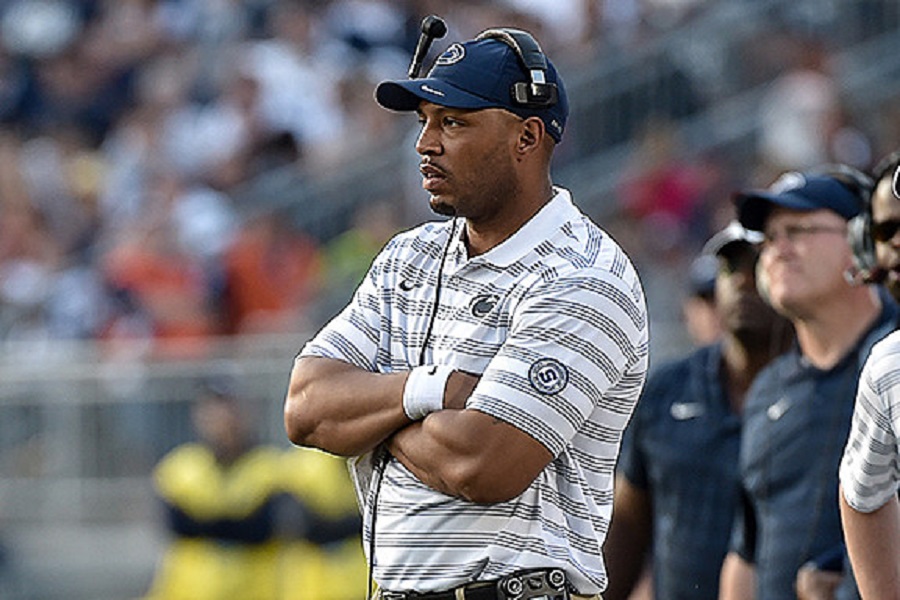 Some coaches and fan bases simply hate it when their team loses coaches from their ranks, but at Alabama, it has become an accepted reality and for them, it isn’t such a bad thing. Especially if you land a coach like Josh Pettis who did wonders at Penn State.

Alabama Proving Coaching Changes Can Be A Good Thing

Joe Paterno held his staff together longer than almost any coach in the upper division of college football. It was indeed a rare thing and Paterno often said it was one of the strong reasons for his success at Penn State.

Yet in his 45 years as head coach there, he won less than 50% of his bowl games and only won two national championships. So tell me again how keeping a coaching staff together is a great thing.

Coaching as a profession usually means change. Most coaches move from team to team, conference to conference and see the good and bad that each stop has to offer. They constantly pick up good tricks and abilities from other coaches, but also see mistakes that are made that they can learn from and avoid in the future.

Coach Paul “Bear” Bryant was being interviewed once and the reporter trying to be gracious in his praise of the coach remarked, “Everyone says you are the smartest coach in college football.” to which Bryant remarked, “Hell, I’m not even the smartest coach on my staff, much less the nation. When I’m hiring a coach, why the hell would I hire one that isn’t smarter than me? Why would I hire a guy who couldn’t come in and teach my boys something new that I didn’t know?”

Saban feels the same way. He brings in coaches who he knows can look at what is being done and finds ways to improve the situation.

In interviewing the players, that is certainly the case. An example is Da’Shawn Hand who said he felt lessons he had learned from coaches who were there when he first came to the last defensive coach he had, Jeremy Pruitt, now the head coach at Tennessee all had different techniques they taught him that made him the player he is today. He said while he hated to see Kirby Smart leave for Georgia as well as other coaches who made a great impression on him and moved on, that he thinks he benefited from having new coaches come in “shake things up” enough to keep his mind adapting to change and finding new ways to improve. “You can’t live off what you did last season with a new coach, you have to make an impression all over again because he’s going to put the guys out there that not just are the best, but that fit into what he’s trying to do.”

Certainly that will have to be the case this season with Alabama bringing not just new coaches, but new coordinators too. Brian Daboll moves from Alabama’s offensive coordinator to the NFL’s Buffalo Bills and we just mentioned, defensive coordinator Jeremy Pruitt becomes the new coach at Tennessee.

Mike Locksley moved up from receivers coach to offensive coordinator and this signals a move to a bit more down field passing from the Tide from the rush heavy, plink and dink offense of Daboll. Locksley better than anyone knows the talent in the receiving corps and he intends on utilizing it. In his other two stints as offensive coordinator, Locksley’s teams showed significant improvement in offensive numbers, especially in the passing game. His hire sat well with the players who know the intensity he can bring.

Tosh Lupoi moves up from his role as co-defensive coordinator and OLB coach to the defensive coordinators job. Not only is this a move that his welcomed by the players, but keeping Lupoi on staff means keeping one of the nation’s best recruiters in place as well. But behind these men, taking their old jobs are new blood.

The new receivers coach taking Locksley’s place is Josh Gattis who was not only considered to be one of Penn State head coach James Franklin’s best coaches, but the Big 10 recruiter of the year as well. He was an excellent snag for Alabama who will pay big dividends early in coaching and recruiting. While Lupoi will still have his hand on the OLB’s Pete Golding is a new linebacker coach for the inside linebackers. He is a hard nosed guy who starts his 12th year in coaching and after helping a lot of smaller schools boost their defensive production, finally gets a chance to play on the big stage with the big boys. He is a guy who feels like he has a lot to prove and he will do a great job.

Another new hire Saban was particularly pleased with was Dan Enos, who Kirby Smart wanted as his offensive coordinator when he moved to Georgia in 2015, but a contract clause kept him from going to another SEC school then. Enos comes to the Tide with a great offensive mind and will work with the quarterbacks and be the 49 year old Enos is finally with Saban after years of looking to get him. Enos put the most yardage on Alabama when he was offensive coordinator at Arkansas by hanging 473 yards on Alabama in a 49-30 loss. As I mentioned before, Alabama is moving towards more of a downfield threat and Enos is the perfect guy to help them do that. In that 2016 Arkansas game just mentioned, Enos got quarterback Austin Allen to throw for 400 yards on 25-for-48 passing with three touchdowns and Allen isn’t even on the same page as what Enos will have to work with here at Alabama. It could be a very entertaining season seeing this change.

Karl Scott will have his hands full rebuilding the defensive backfield who loses so much talent. He comes to Alabama after six other stops and a man in his young 30’s can still relate to the youth in the Alabama secondary. He has been a defensive coordinator already as well as a linebacker coach to go with good experience as a defensive back coach, so for a young man, he brings a wealth of knowledge of all defensive positions to the team. Of all the new hires, Scott will have the biggest obstacles to overcome and the toughest job.

This is the first year Alabama will have a coach that dedicates so much time to special teams. Jeff Banks is another steal for Saban and Alabama. When Kevin Sumlin was fired at Texas A&M, Saban was able to grab up a guy who not only had special teams experience but is one of the best in the country. His Aggie teams represented one of the top special teams each year in all of football. Except for punting, Alabama’s special teams have be far from special in the past few years. In fact, the kickoff and return yardage has simply sucked. If Banks can sprinkle the same Pixy dust on this special team as he has everywhere else he’s been, this could be one of the best coaching snags of the season for Saban.

One hire that even competing coaches say was one of Saban’s best new hires is “Coach Kool”, Craig Kuligowski who comes to the Tide from Miami where he really turned around the Hurricane’s defensive front. He is widely considered to be one of the best in all of college football for getting the most out of a defensive front. His quick turnaround in Miami is well documented, but his time at Missouri is not to be forgotten either. There he coached 24 all-conference players from the defensive front and four first round NFL Draft picks from 2009 until his departure in 2015 and 12 NFL Draft picks since 2002. And keep in mind that these were Missouri recruits without coming in with the fanfare and rankings that Alabama’s picks have, so it’s a great thing for Alabama fans to imagine what he can do with this level of talent.

Because of Saban’s success, coaches that have served under him have become a hot commodity and dozens of them have gone on to be promoted in other schools as well as the NFL, but because of the same care he uses picking coaches as he does in recruiting players, Alabama has not only fared well with replacement coaches, but thrived under them winning national championships at a heretofore never achieved rate in all of football.

Therefore, history not only indicates, but proves that coaching changes at least under Nick Saban are far from a bad thing, they can actually be a good thing. As Da’Shawn Hand once said, he learned something new that helped him from every coach that touched him at Alabama and that at least for him, those changes were a good thing. Far be it from me to question a future NFL player with multiple championship rings and the proven success that came with each new hire.

So while some teams lament the fact that they’ve lost a good coach, at Alabama, it’s just part of the yearly changes that all teams go through and for them, it is indeed a good thing.