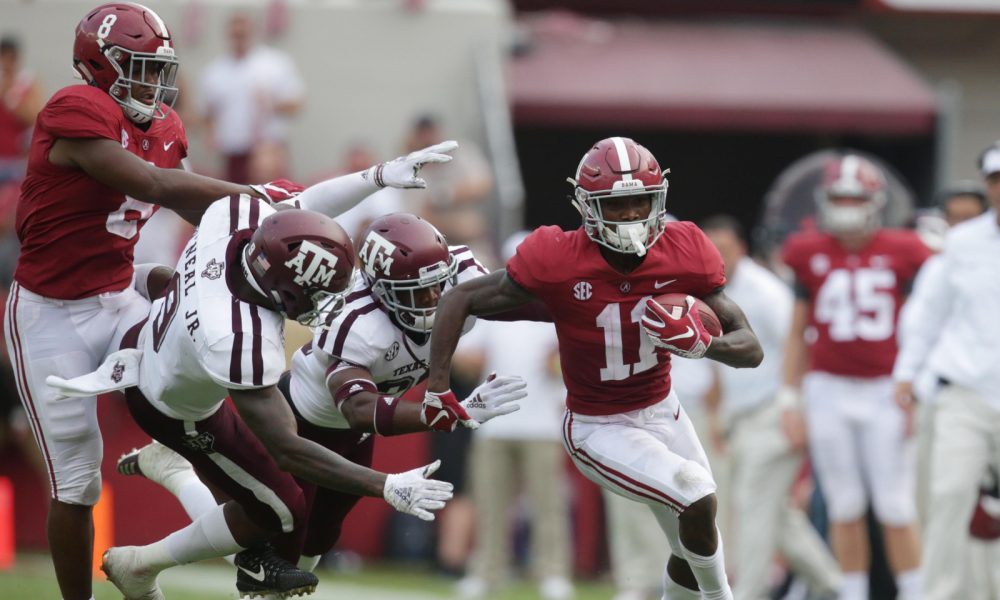 Alabama did not control the game like Nick Saban would have liked, but the Crimson Tide did secure a 45-23 win over Texas A&M in a physical game inside Bryant-Denny Stadium.

Prior to this week’s matchup versus Louisiana, Saban unveiled eight players of the week – including three apiece on both offense and defense.

Damien Harris, Irv Smith Jr. and Tua Tagovailoa represented the offense; Isaiah Buggs, Dylan Moses and Anfernee Jennings were honored on defense; and Joseph Bulovas and Henry Ruggs III were recognized for their efforts on special teams as Alabama improved to 4-0.

Harris turned in 100 total yards offensively. He was credited with a team-high 52 yards rushing on seven carries while recording two catches for 48 yards. Smith finished with four receptions from his tight end position and totaled a career-high 74 yards. The junior from New Orleans is third on the team in receptions (13) and receiving yards (196) and has two touchdown catches.

As for Tagovailoa, he posted his third straight game in completing 70 percent or better of his attempts in the passing game. He connected on 22 of 30 throws (73.3 %) for 387 yards and accounted for five touchdowns (one rushing). While his passing yards tied him fourth all-time in school history (AJ McCarron, 387 in 2013 vs. Oklahoma), Tagovailoa’s five scores tied him for most all-time in a single game with former Alabama star Gary Hollingsworth (1989, Ole Miss).

Buggs, Moses and Jennings combined for 19 tackles, including six of the Tide’s season-high seven sacks and 7.5 tackles for loss versus Texas A&M. Buggs has feasted on the Aggies in the last two seasons, tallying 17 tackles, 3.5 tackles for loss, three sacks and two quarterback pressures. His career-high in sacks moves him to five on the season, giving him the team lead in the department. Jennings, a redshirt junior, looked fully healthy on last week, creating havoc in the Aggie backfield with three tackles, 2.5 tackles for loss and 1.5 sacks.

Despite Moses getting into a little scuffle with the wall, he led Alabama’s defense with nine total tackles with one coming for loss. Behind Moses, the Tide help Texas A&M’s running back Trayveon Williams to just 31 yards rushing. He entered the matchup as the Southeastern Conference’s leading rusher, averaging 6.8 yards per carry and 133 yards per game.

Bulovas continues to impress on special teams. The redshirt freshman totaled nine points that included a career-long 47-yard field goal as time expired in the first half. He was perfect on all six of his extra point attempts and averaged 52.4 yards on kickoffs (seven tries, 367 yards).

Although his touchdown was scored on offense, Ruggs assistance with the Tide on special teams earned him his first-ever recognition from Alabama’s coaching staff.