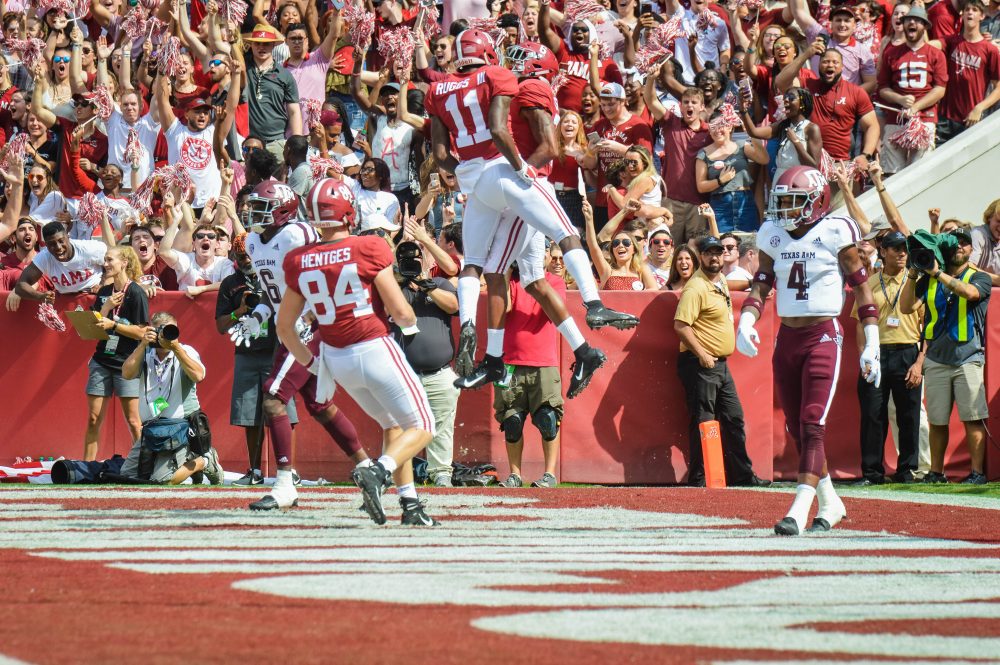 Ruggs and Buggs, it could be Saturday morning cartoon title or the name of a carpet cleaning and exterminating company. But in Alabama, it’s the name of two dreaded hitters.

Alabama’s Ruggs and Buggs Both Hit Hard… On Different Sides of the Line.

This is a very physical Alabama team. I mean this team doesn’t just beat you, they beat you up for four quarters. They manhandle teams and they do it on offense and defense. While that may be the new standard in the Nick Saban era, let’s talk about two players who you may not have expected to bring such a battering before the season started. These two are Henry Ruggs III on offense and Isiah Buggs on defense.

Now I want you to know these guys aren’t timid. They’re hitters. You should also know  that they don’t always make politically correct, polite tackles and blocks, but unload on opposing players with all the ugly savagery within the rules of football. It’s not a slur on them in any way. They just aren’t afraid to put themselves in a position of laying a good lick on someone. In person, these are two of the nicest young men you’d ever want to spend time with and both are great men in every sense of the word. They want to make life as close to hell as they can make it for those they have to come into contact with, they want to make them quit.

We knew that Buggs had a breakout season coming, you saw flashes of it before. Through four games let’s look at some numbers:

But what stats don’t tell is how he simply continues to bang and batter opponents until they start clock watching and simply give up in the fourth quarter. At 294 pounds and quick as lightning feet, he simply is a speedy bulldozer going through opposing offensive lines and he’s not a grab and drag you down kind of tackler. No, you know you’ve been tackled. He brings the bang. Should he finish this season the way he’s started it, he’s likely looking at being yet another first rounder from the ranks of the Crimson Tide.

But he doesn’t just you highlight moments for the sake of making a good play every now and again, Buggs comes through on big third downs and in moments that start a fire. If you just want to watch the game within the game, record Alabama’s games and just watch number 49 without watching the rest of the action. What you’ll see are things that don’t show up in the stats, but things that NFL scouts look for. Unfortunately there are no stats for “Plays he affected the outcome”, but he has so many plays where his actions chase ball carriers and quarterbacks into the arms of other men in Crimson.

What’s funnier is watching the opposing linemen who face him. Watch how they get up slower and slower and start sucking air with their hands on their hips. That is the kind of action I like to pay attention to.

Now, what’s so great about Henry Ruggs III? His stats certainly don’t put him among the elite receivers in the game. Here they are:

Now if you do the math, he catches on average less than three balls per game. But he also almost averages one touchdown per game from those measly stats. You see, no one at Alabama is going to have NCAA leading numbers as an individual. That’s because Tua Tagovailoa distributes the ball like a mom passing out cookies to her kids, everybody gets some and just like a good mom, there is no “favorite” among them.

So why am I writing about Mr. Ruggs? Because he’s a hitter at a position that isn’t known for having any. One of the reasons he got my attention is his blocking ability and style. He doesn’t do the wide receiver “get in your way” block, he brings the hammer. Whether he’s blocking for another receiver of a running back streaking down his way, if you’re on the field at such a time, you better have your head on a swivel and know where number 11 is or you risk being wiped out by him.

Again, rewatch the game and just watch how many great blocks this young man makes and the ferocity that he delivers them.  He also brings that kind of play when he’s in playing special teams. This is a receiver who plays with the heart of a Jack linebacker. He wants to get in your face and make you feel the pain. But like other talented receivers on this Alabama team, Ruggs can also hit you with the big play and take it to the house as he did on Saturday.

Yes, Ruggs will also hit you with the big one as he did on Saturday. What a great shot by our Touchdown Alabama staff here as Ruggs both eludes a tackle from two defenders and tight ropes the sidelines with a move that is best categorized by the look on number 20’s face on the sidelines. (Photo – Touchdown Alabama Magazine)

So for this season coaches have given both Ruggs and Buggs “Player of the Week” honors because they see all those little things that the casual fan may miss. Once you get a little used to keeping an eye on these two also, you’ll see why everyone who spends the time to focus on them, love them.

Alabama in the Pro’s week 3 update
What Alabama Fans Could Be Missing in This Wonderful Season
To Top
%d bloggers like this: