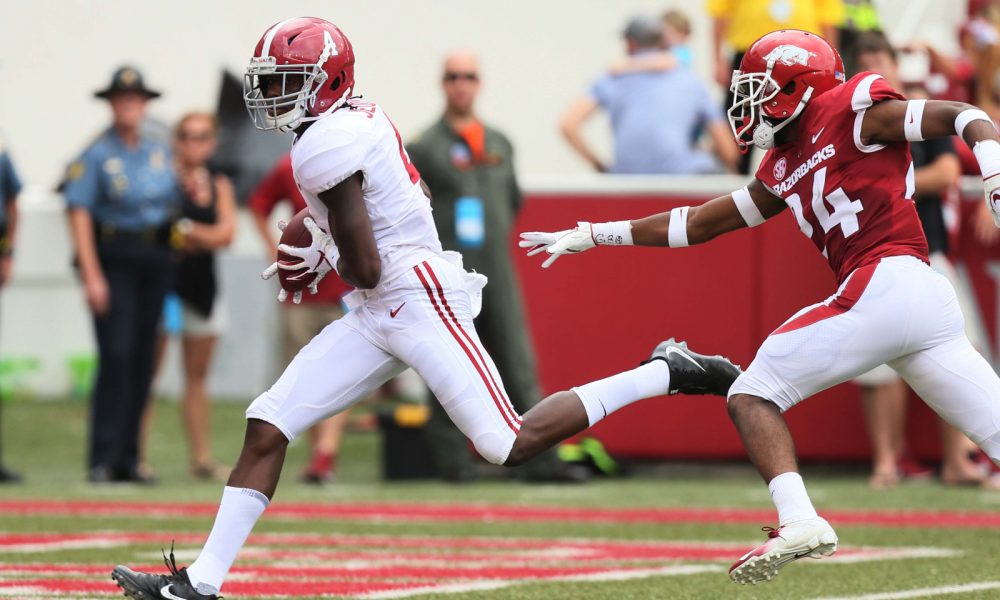 As special as Julio Jones, Amari Cooper and Calvin Ridley were as headline names at wide receiver, Jerry Jeudy may finish his career with better numbers than all three of them.

To pair beside his talent and work ethic, he has a position coach in Josh Gattis that is one of college football’s brightest and Jeudy also has the nation’s most dangerous quarterback in sophomore Tua Tagovailoa throwing him the football. When Tagovailoa has looked in his direction, the statistics for Jeudy have been impressive.

He leads the University of Alabama football program in receiving this year with 23 catches for 558 yards with eight touchdowns.

After recording his first-ever 100-yard receiving outing against Mississippi – three catches, 136 yards, two touchdowns – he burned Arkansas’ secondary for 135 yards receiving with a pair of scores on four catches. Both of his touchdowns came on plays of 20 or more yards, including a 60-yard catch and burst to pay dirt from Tagovailoa in the second quarter.

While his second marquee performance assisted the Tide to a 65-31 win, the former five-star has his eyes on a much bigger prize. Jeudy’s eight touchdown receptions through six games has him tied for fifth all-time in school history for receivers in a single-season. He shares his place in the record books with All Bell (1985) and ArDarius Stewart (2016), but Jeudy is chasing Cooper.

Cooper, the winner of Fred Biletnikoff Award in 2014, finished his junior season with 124 catches for 1,727 yards receiving and 16 touchdowns. With the connection that Tagovailoa has with everyone and the defenses Alabama will face down the stretch, there is a good opportunity for Jeudy to supplant Cooper and become the program’s single season leader in touchdowns.