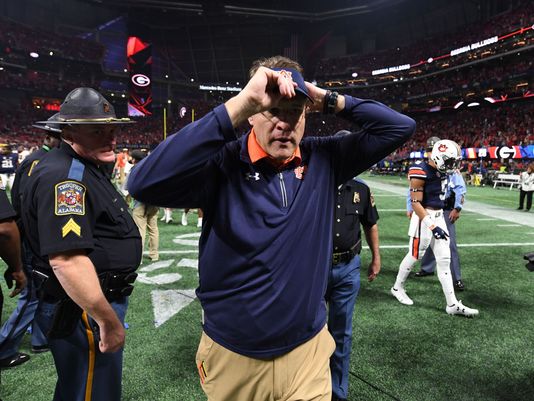 Auburn fans aren’t the only ones wondering what’s happening on the plains. Are the Tigers going from a top 5 team to a non bowl contender?

It seems like only yesterday that Auburn defeated Washington and was cited to be one of the top teams in the nation and a team with a good shot at going undefeated into the Iron Bowl.

That was then and now the Auburn Tigers sit at 1-3 in conference play and 4-3 overall. They are next to the bottom in the SEC West and now have no realistic chance of playing for an SEC title or perhaps even a premier bowl game.

It’s not that the defense is the problem with the Tigers, it’s the offense and therein lies the head scratching problem. Gus Malzahn was hired solely for his ability to transform the Tigers into an offensive powerhouse. For that, he is being paid one of the top salaries in the country.

But seven games into the season, now at the halfway mark for most teams, Auburn sits 11th of the out of the 14 teams in the SEC and 94th out of 130 teams in division one in total offense. Let’s put that into perspective. Gus Malzahn, the “offensive genius” is not even in the top 75% of division one teams in offensive production.

Given the fact that he just signed a seven year extension to his contract for just over 49 million dollars, Auburn fans are now asking, “Why?”

Jarrett Stidham was supposed to the quarterback they needed, he was supposed to save the program and indeed last year he showed glimpses of being able to do that. This year however, with a year of Malzahn’s tutelage under his belt, all his stats are worse this season and at times he looks totally confused.

Looking over their remaining schedule, there’s only one sure win left and the probability of something as miserable as the Birmingham Bowl certainly looks possible at this point.

Fans are clamoring for Malzahn’s head, but with a 32 million dollar buyout, the school can hardly facilitate that wish. Auburn’s stupid hiring and firing means they’ve paid out more money to coaches in buyouts and salaries than Alabama has paid Nick Saban over the last few years. Imagine paying more than Nick Saban money and being stuck with Gus Malzahn, a coach that just lost to the worst team in the SEC East for the last few years. This after firing Gene Chizik and paying him 7.5 million to walk away so they could get Gus. So you really have to add that 7.5 million onto what you paid Malzahn’s salary to come up with what they’ve paid for having a head coach.

How did all this happen? There is the question. After defeating both Alabama and Georgia last season, two teams that were both in the college football playoffs, the future seemed bright, but Malzahn failed to use those wins to reel in top recruits and restock the shelves. Furthermore, the team’s offensive players and coaches seem confused and there’s rumors of short tempers and finger pointing in the program.

Should Auburn lose to Ole Miss this weekend, the chances that Auburn even makes a bowl game at all seem slim. For a coach that makes over 7 million dollars a year with a guaranteed contract that runs to 2024 that is almost inconceivable. Especially for a team who defeated the two teams who played for the national title last season.

But if you look at Auburn’s history, it is that of a yoyo. Up and down years with little consistency, where one great year is usually followed by a flop. So it seems to be once again.