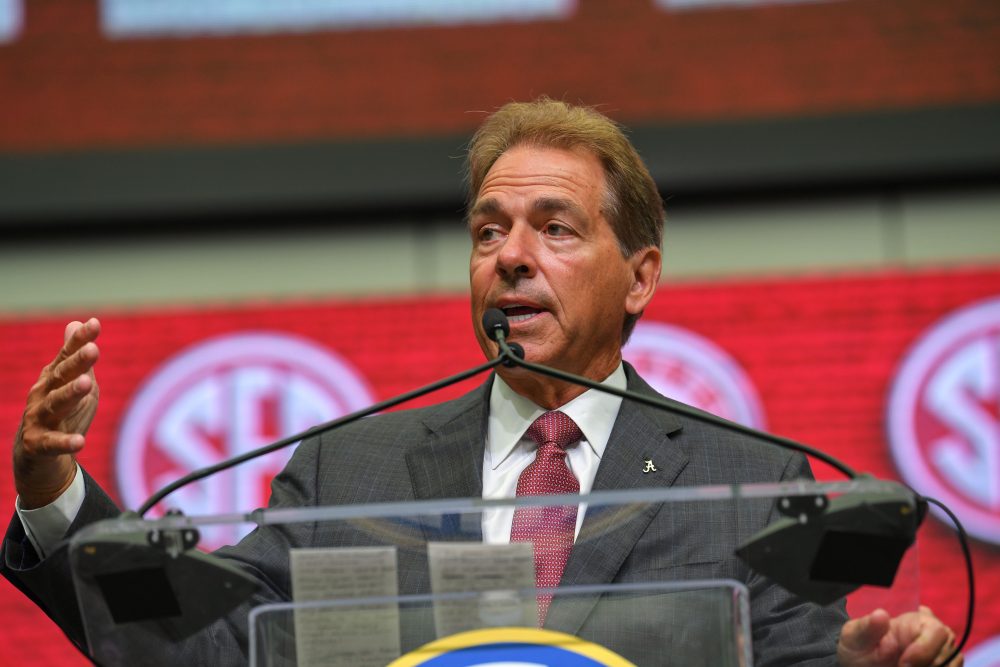 Nick Saban is an ever evolving coach who refuses to rest on his laurels or what got him to the top. Ready how he does it.

Nick Saban’s Metamorphosis is Great, But Will Never Be Complete

Even though in his youth he was a quarterback, Nick Saban has always been a “Win with defense” kind of coach. In his coaching career before becoming a head coach, he was never an offensive coach. He did what he believes in, defense.

At every coaching stop including Alabama, Saban had quarterbacks who were either “game managers” or quarterbacks who he kept reigned in. He wanted an offense that could control the time of possession clock, keep his defense resting on the bench and score just enough points so that the defense could throttle an opponent’s offense. He didn’t mind winning games 9-6, it was a win.

Years ago when I interviewed a young AJ McCarron, he said he came into Tuscaloosa with a gunslinger’s mentality with the confidence to try and squeeze in come close throws. He also said that this trait was taken away from him to earn playing time. You didn’t make risky throws no matter the potential reward, you controlled the ball and never turn the ball over. Clearly, that has been a trait of every Alabama quarterback in the Saban era. Offensive fumbles and interceptions were almost unheard on. Don’t take chances, play safe, protect the ball, move the chains.

But he knew times were changing. Spread offense teams, running quarterbacks and RPO offenses caused him problems, so if you can’t stop them, join them. First he hired Lane Kiffin to help him transition into a hurry up, read option type offense. Blake Sims gave him the mobile quarterback and some great receivers let him stretch the field, but it wasn’t complete. Then along came Tua and the Saban Metamorphosis was now complete. For the first time in his career as a coach, he has an offense he totally unshackled and let pile up the points. Now instead of beating teams down with his defense, making their ass quit as he likes to say with a stifling defense, he has an offense that buries teams 38-0 by halftime and makes their ass quit that way.

Oh he still loves his defense and he has another great one this year, but this is a Nick Saban team that is re-writing the record books in Tuscaloosa and the NCAA headquarters. Offensive records that is. Not since 1888 when Yale did it, has any team beating their first 12 opponents by more than 20 points.

This is a team that was one of the worst in the nation in third down conversions and now it’s one of the best. This is a team that had the 30th rated scoring offense in 2015, in 201 it went up to number 15. This season they are the nation’s second highest scoring team, one point behind Oklahoma who plays in a conference where defense is just a name.

Now whether Saban has to come accept all this inside, we’ll never know. This is a man who won’t let us easily peek inside his personal nature. But whether he likes it or just accepts that it was a change that had to be made, he has to be at least be happy with the results.

Alabama has been a pipeline to the NFL, but presently only the earlier mentioned McCarron is the only Alabama NFL quarterback. There are plenty of other Alabama players at plenty of other positions, but quarterback is not a place that’s seen a lot of Crimson Tide players make it lately. That too is about to change. NFL teams are already salivating over the prospect of landing Tua for themselves. And for Saban, that will pay dividends in the future.

To some change is a bad thing, for Nick Saban, the metamorphosis was a great thing and a great thing to watch happen. The best thing about it though, may be that we will never see the end of it. We’ll just have to wait and see what the next change will be.