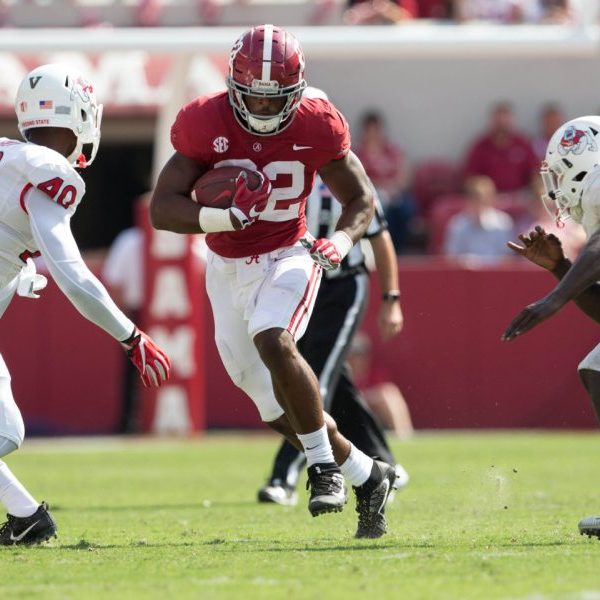 While there are lots of players that will be attempting to fill the shoes of players who are moving on, here’s the argument of the one that must do it best.

Who Has The Biggest Shoes To Fill This Season at Bama?

Every season someone has to step and fill the shoes of a departing starter and often how well they can do that can make or break a team. Even though Alabama’s bench may be the best stocked in the nation, that statement is just as true for them.

While several new starters could be mentioned here only one deserved an honorable mention. Ross Pierschbacher did a great job at center this past season and Chris Owens steps in this season. While Owens has the size and strength for the job, calling the blocking schemes and being a leader may take a little time. Still, while this is a close second place, number one will be more telling.

So in this writers opinion, number one is compelling for many reasons and we’ll try and cover them all. Najee Harris has proven he’s a good running back, so if you think that saying he has big shoes to fill is on the silly side you may not have considered the following:

Harris has not had to be the “The Guy” so far in his time at Alabama. He’s been the backup guy, one of the horses in the stable and the two guys in front of him were absolute studs as you’ll see in this upcoming NFL draft as well as the legacy they leave behind. He didn’t have to deal with being the guy to tote the rock for most of the entire game. So far during his time at Alabama, he’s been a rotational player.

What’s different this season is that not only will Harris be the show pony as Damien Harris was last season. Also while Brian Robinson has shown that he can be good against tired players in mop up duty, he’s still not able to come close to start the season with the kind of expectations that everyone had either Damien Harris or Josh Jacobs. That means that Najee may have to carry the load a lot more than the starting running backs at Alabama did in the last few years. There’s just not not as big a proven  talent pool behind him as there has been.

Also, while Harris has proven he can be a good runner, he still has work to do picking up blocking and running pass routes. So it’s not like he’s taking over with every skill down-pat and can just continue doing what he’s been doing.

You also have to consider how important the running game is in the Alabama mindset. Should Harris not be able to fill the void left from not one but two stud running backs, more pressure will be placed on the Tide’s quarterback, Tua Tagovailoa who didn’t play his best in the championship game last season and no matter how great a quarterback is, he needs a good running threat to keep the defense honest.

The last reason that Najee Harris has to be the number one guy to fill the shoes of his departed mates is that is that Alabama’s defense left a little to be desired down the final stretch of SEC and national playoff games and the offense was put in a position where they had to win shootouts and had to score a lot of points. Without a threat of a great running game, that simply won’t happen.

So while like every season, new starters have to step up, no one has to step up more that Najee Harris and no one has bigger shoes to fill than those of perhaps two first round running backs.

Are You Watching the AAF? Take the Poll and See the Results
Mark Ingram Gets a Million Dollar a Year Raise With Ravens But is Still A Bargain
To Top
%d bloggers like this: