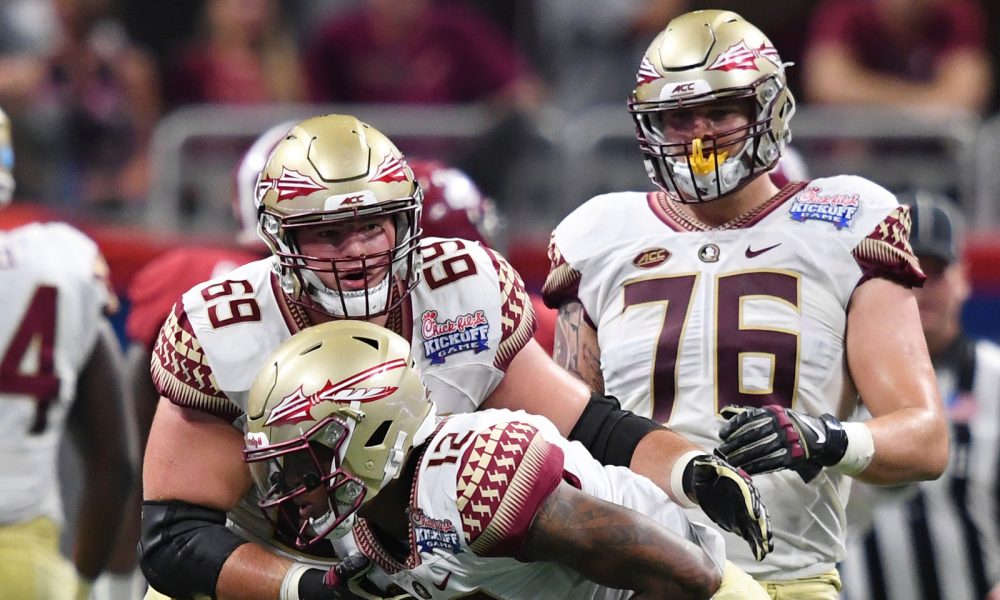 The University of Alabama has had success in getting the best student-athletes via transfers and having them play well. A few names that come to mind include Richard Mullaney, Isaiah Buggs, Jarran Reed, Jesse Williams and James Carpenter among others.

After losing Jonah Williams, Ross Pierschbacher and Lester Cotton from its offensive line, the Crimson Tide turned to the transfer portal and received a commitment on Sunday from Landon Dickerson – formerly of Florida State.

News was first reported via 247Sports.

Dickerson, a North Carolina native, was a five-star recruit via 247Sports and a four-star prospect from other recruiting networks in the 2016 cycle.

He was one of the nation’s top offensive linemen out of high school and despite his versatility, media outlets rated him as an elite guard.

During his freshman season at FSU, he started six games prior to sustaining a season-ending knee injury (anterior cruciate ligament).

The Seminoles went 10-3 in 2016 and while Dickerson’s first career start came versus Charleston Southern, he was behind the best offensive performance of the Jimbo Fisher era in the team’s meeting against South Florida. He cleared the way for 55 points and blocked for two 100-yard rushers (Dalvin Cook, Jacquez Patrick) in a 55-35 win.

Dickerson paved the way 478 yards rushing; the second-most yards in Florida State history. Cook’s output of 267 yards was the second-most by a Seminole in a game. Despite the injury, Dickerson was an honorable mention All-American.

Like the previous season, he would start the beginning of his sophomore year (first four games) before the injury bug hit him again. The 6-foot-5, 310-pounder missed the final nine games with a medical mishap; however, he did turn in a good outing against No. 13 Miami in a 24-20 loss.

He helped true freshman Cam Akers have his first-ever 100-yard rushing performance (121) in the rivalry.

Dickerson started two games last year against Virginia Tech and Louisville, unfortunately, he would get hurt once more and ended up redshirting in 2018.

He assisted Deondre Francois to have a career-day versus the Cardinals, as he totaled a season-high four touchdown passes and tossed for 294 yards in a 28-24 win for Florida State.

When healthy, Dickerson is really good. Injuries have kept from becoming a finished product, but he does have two years of eligibility left.

Coming from a power five school, he understands how to perform on big stages. Seeing how Deonte Brown will miss the four games of next season (NCAA violation), Dickerson is in a competition for either left or right guard.

Players such as Brown, Matt Womack and Evan Neal are the ones he will battle.

Emil Ekiyor Jr., a freshman, had a great spring and he’s ready to start at left guard.

Dickerson brings ideal size, experience and depth to the position.

It will be interesting to see how quickly he grasps the system and earn the trust of everyone around him.

He anticipates finally shaking away from injuries in the fall.