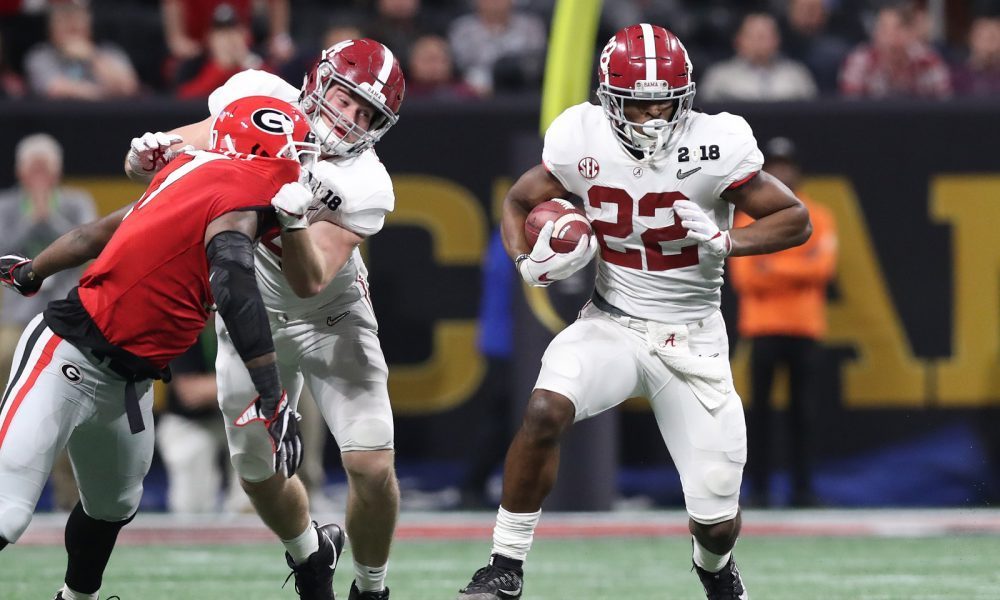 There is no other player I can see with more weight on his shoulders than this man for the upcoming season. Read and see if you agree with this analysis.

Every man in Crimson has an important role to play as does every member of every team, but there is always one man who carries the heaviest load, whose success or lack of it will mirror what they team is capable of doing on that day.

If you thought that man was Tua Tagovailoa, the Tide’s great quarterback, it is not. He can have an average day and let those around him on offense pick up the slack and the team can keep rolling.

If you thought it was a defensive player, think again. The Alabama defense is set up so that one man having a bad day won’t kill the team’s effort to win.

At Alabama, for the team to roll, the offense has to roll and here in Tuscaloosa, if the Tide isn’t running the ball with consistency, problems soon appear.

Damien Harris and Josh Jacobs proved to be a good one two punch last season and occasionally Najee Harris would have a hot hand on a particular day and look good, but being the main man will weigh heavily upon the young man from California.

I remember talking to Eddie Lacey a few years back halfway through a season where he was finally “The Man” who was the wearing the crown of starting running back after backing up some of Alabama’s other great running backs for all but his last year.

“We always work as a group and all the running backs are close on this team. There’s no jealousy and we all pull for one another.” Lacey told me. “But this season it’s up to me not to do it all myself, but to set the tone, to outwork the others you know and be an example and the leader the group needs. It’s about motivating, coaching and raising the bar on expectations. I learned a lot from the guys who took me under their wing early on and now it’s my time to step up and pay back.” He finished.

Such will be the things on Najee’s mind this season as Saban will let him know there’s more to being a starter than marquee playing time.

Every season Alabama has had at least two well oiled hot shots with good experience to rely upon. This year they have Najee. Bryan Robinson has had some snaps, but not in prime time and never when the game mattered. Trey Sanders is going to get some looks as a freshman and with his six foot 218 pound frame he’ll be a handful when he gets his steam up and Keilan Robinson will see the field some, but in reality, this is the most inexperienced backfield of running backs Alabama has had in a long long time.

Now last season Harris did show he was getting ready for his starring role. He led the team in yards per carry with a very impressive 6.7 yards a carry. Considering that was better than two guys who just left to sign big contract in the NFL and you see he may be ready for prime time. However, the big but you can add is that this was in limited playing time as a backup when he was usually fresh.

How he does as the main man remains to be seen. Najee has only one 100 yard game and that was against diminutive Arkansas State. Alabama has years of fielding backfields where up to three running backs with hundred yard games were under their belts. Some years it didn’t matter who had the most carries, they were all so talented. This year it will matter and matter greatly.

Plus you must remember rule number one on Saban’s running back list: If you can’t block and pick up a rushing defender you don’t see much if any playing time. This is still something that Najee himself admits he can do better and needs some work at. The other backs behind Harris have even less ability to pick up blitzing defenders. Because of the lack of that experience, Najee may have to carry the rock more than what an Alabama running back usually does and that can be something he has to adjust himself to also.

Harris came to Alabama knowing he could have more carries and quicker stardom elsewhere, but he also knew that there were few places he could go where the challenges ahead of him would make him the best NFL ready back he could be. However after very limited playing time as a freshman, Najee pondered transferring to reach stardom quicker. But his personal trainer, Marcus Malu along with family and friends talked him out of leaving because they knew no other school could offer the same preparation for becoming NFL ready.

So this is it. After two years of being a backup, it’s his turn to be “The Man” in the running back stable. That is a role that comes both with a lot of history and glory and even more responsibility. He knows a great year this year could have him NFL ready at the end of the season, but only if he wears the crown of leading running back well at Alabama.

If he does his job the way he’s capable of doing it, Tua can have an off day and the Tide can still win, but it may be a big problem if Najee has a bad day and Tua struggles also. A great day of running the ball can only make Tua’s job of making the passing game zip along easier.

All players will have to do a great job to make this a championship team again, but they weight on anyone’s shoulders may not be greater than Najee this season and I suspect he’ll be up to the challenge.

SEC Football – Who’s Better -The Same – Or Worse?
Alabama AD claps back at a fan who ripped its 2019 non-conference schedule
To Top
%d bloggers like this: