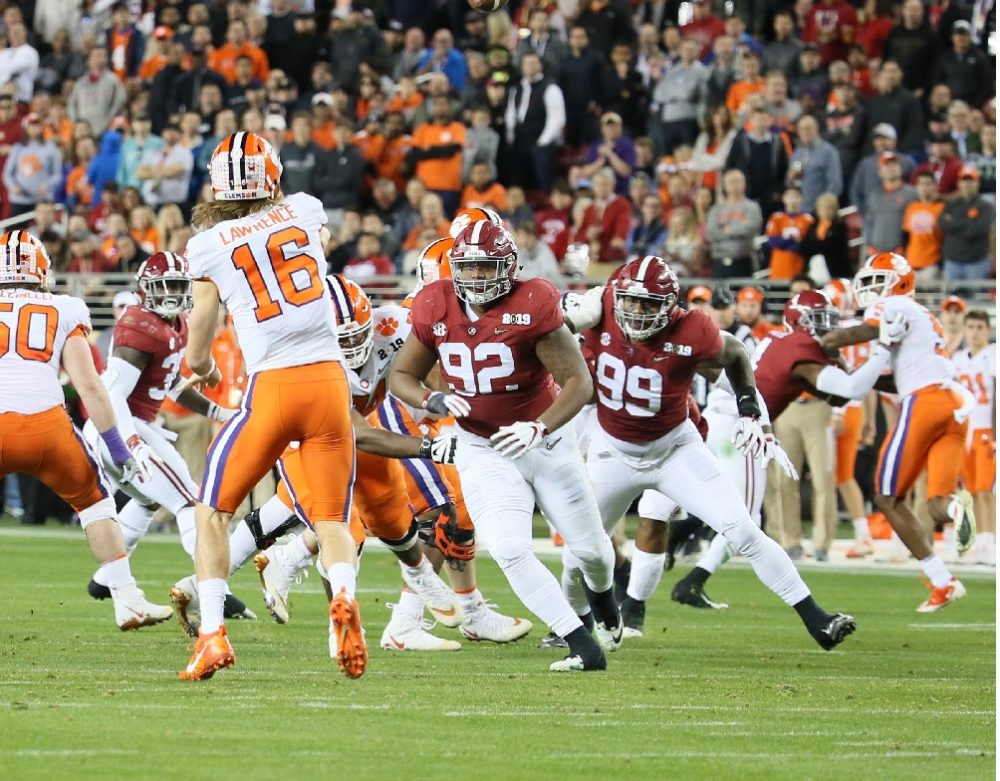 There could be a lot of reasons Alabama lost badly to Clemson last season, but here it this writer’s analysis on what went wrong.. See if you agree.

Last season, Alabama truly started and rolled through most of the season like a true Crimson tidal wave, burying opponents so deeply by halftime they simply lived up to an old Saban mantra, they “made their ass quit”.

Alabama broke scoring records, yardage records on offense and just looked like a darn Juggernaut that couldn’t be slowed down or stopped. At least until the end of the season and here’s where this article’s theory takes hold.

During the first 75% of the season, hardly anything went wrong for Alabama. But that was because the first 75% of the season was much easier than the end, the toughest games were in those last four games. Auburn was a real battle until halftime, then Auburn fell apart. Georgia was a typical tough game, Oklahoma threatened to come back in the second half and Clemson beat them badly.

First of all Alabama got used to Tua being Superman. He’d simply have folks buried by halftime and the team could just coast in the second half. He was scoring so much, so quickly hardly making any mistakes and every 50/50 pass he’d throw up, just seemed to work out.

Alabama had quickly forgotten what it was like to be in a real gut check, toe to toe game. They weren’t used to Tua being less than 100% healthwise or mistake wise. When both those things happened, things went a little South, they just weren’t the same offense. They had become too reliant on big pass plays bailing them out and had gotten softer in the run game.

Secondly, with Alabama scoring so quickly, the defense was left on the field a lot longer than should have been. In 2018 Alabama kept the ball almost exactly half of the time, or 30 minutes of the 60 minute game. While that is only three minutes less or so prior to Tua becoming the signal caller, the truth was the time of possession in the first half was more skewed with Alabama having the defense on the field a lot more than the opponent. In the second half, Alabama early on would just sit on the ball, run it out and run the clock.

So the last thing that went wrong last season was the defense lost their identity as a physical, whip your butt force that imposed their will on any offense any time, every game.

Against Georgia, Alabama lost the time of possession by nine minutes. Folks, that sneaking up close to being almost a quarter more than Bama had the ball. The defense just wasn’t prepared to deal injuries in the defensive secondary as they hoped and Georgia, Oklahoma and Clemson just picked them apart. Bear Bryant once said, “You can’t score if you don’t have the ball.” But Georgia held the ball far too long and so did Clemson.

In the end though, in the lopsided loss to Clemson, it was the mistakes than cost Alabama a chance to win that game. Because Tua had a bad day, the whole team had a bad day. This season Saban is trying to mold a team that can win without having to have a Tua Heisman kind of day filled with long passes and quick scoring drives. He’s going back to relying on the run to a larger extent and to have the quarterback look first for the “sure thing” first and not the “big thing.

No, he’s not trying to make a game manager out of Tua and take away quick strike capabilities, there will be those plays and those opportunities, but it won’t always be the first option.

So to correct the problems appeared at the end of last season, Saban is wanting to grind down the opposing team’s defense with longer scoring drives, make every drive count and keep the defense healthy and off the field as much as possible. Hopefully they’ll use the knowledge from last season and learn how to fight harder in the tough games in the second half and be a tougher more physical defense that can preserve leads. They want to get back to imposing their will on any offense like they used to do and not rely on the offense to win a track meet with basketball scores.

If they can accomplish these things, there is not a team that can stand in their way.