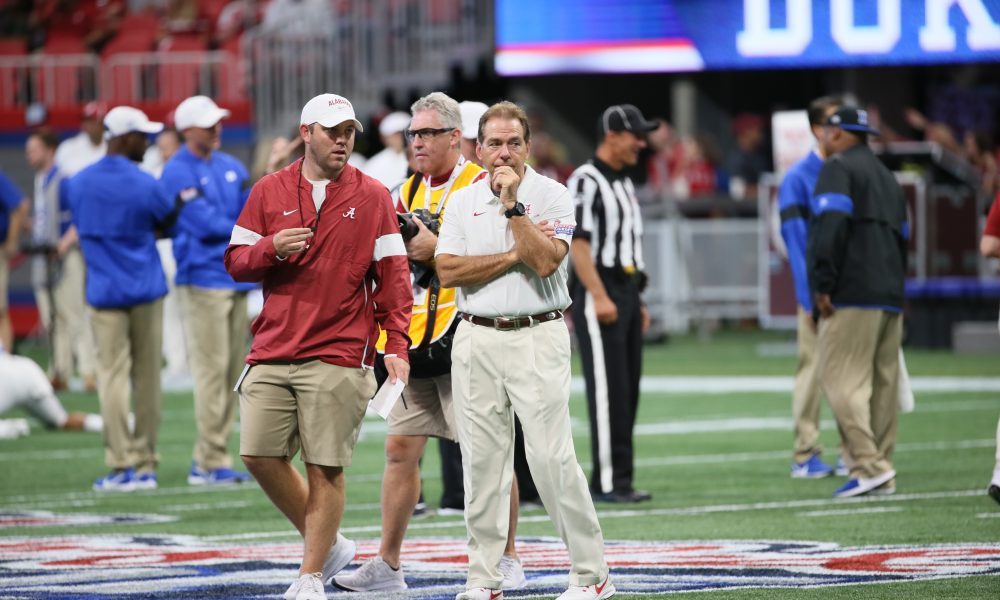 Following a convincing win during week one of the season, the Alabama Crimson Tide continue their quest for a national championship as they take on the New Mexico State Aggies. It’s no secret that Alabama is the heavy favorite in this matchup with an enormous 55-point spread. Even though it isn’t as intriguing of a matchup, there are many key positions to look out for today as head coach Nick Saban continues to look for the right combinations.

It was reported earlier this week by Touchdown Alabama, that there may be some new faces in the first offensive line unit. While leaving practice on Wednesday it appeared as if Florida State transfer Landon Dickerson was working at center along with senior Matt Womack at guard. Last week against Duke the first-team center was junior Chris Owens.

Although the pass protection was solid against the blue devil’s array of stunts, the run game left some to be desired and o-line coach Kyle Flood will look to improve that over the season.

Changing gears to the opposite side of the field, Alabama’s secondary will once again need to have a big impact on the game. Against Washington State, the aggies found little success in the game as they found themselves on the wrong side of 58-7 contest.

But sophomore quarterback Josh Adkins appeared to have a competent performance through the air going 28/42 for 221 yards with seven of those passes going to senior wide receiver OJ Clark and another seven going to wideout Tony Nicholson.

Players like Patrick Surtain II, Xavier McKinney and Trevon Diggs may be having some long days at the office with the pass-heavy matchup.

Alabama’s front seven will also be looking to have a repeat performance today. While holding Duke to an average of 3.3 yards per carry, the group has been a pleasant surprise to start the year. Especially with two freshman middle linebackers in Shane Lee and Christian Harris leading the way.

The young bucks in the middle will yet again have everyone’s eyes on them to see how they continue to progress as conference play approaches.

Alabama will kick off against New Mexico State at 3:00 p.m. CT from Bryant-Denny Stadium. The game can also be found on SEC Network.