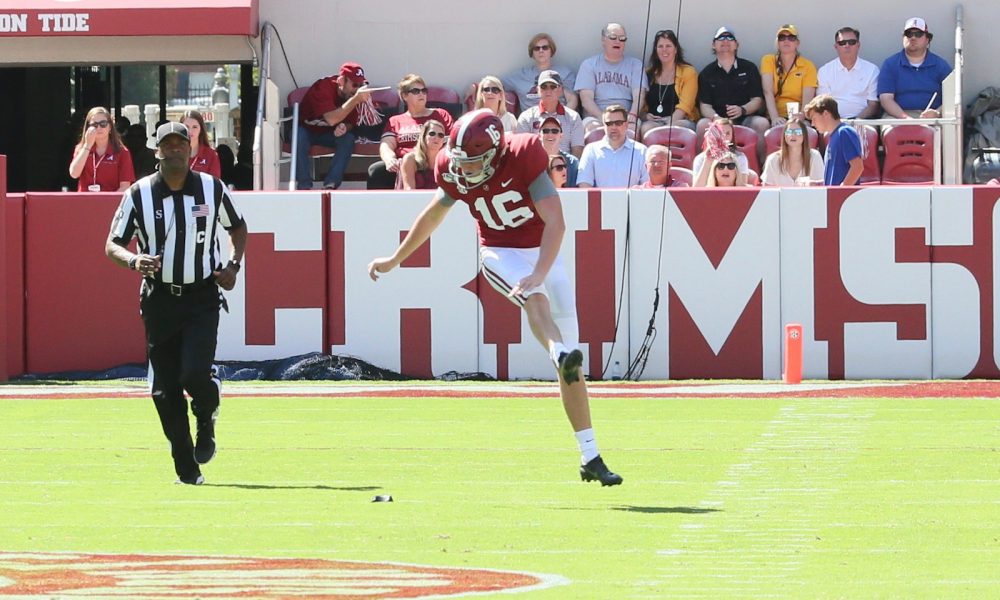 He was pleased with Alabama’s rushing attack, passing game (for the most part) and defensive efforts versus Southern Mississippi; however, Nick Saban had injuries to update after a 49-7 victory for the Crimson Tide at Bryant-Denny Stadium.

Terrell Lewis, junior outside linebacker, did not play as he was dressed in sweat pants.

Per Saban, the former five-star hyperextended his knee in the matchup versus South Carolina.

Lewis is getting treatment for it and per Saban, he hopes the pass rusher will be 100 percent by next week as Alabama resumes Southeastern Conference play versus Mississippi.

“As a kicker, this is difficult to manage,” Saban said of Reichard. “He did it on the kick, where he kicked the tee instead of the ball. He may be questionable for this game.”

Of course, Saban is referring the meeting with the Rebels for Reichard.

The three-star made two extra point attempts, prior to leaving the game and having Joseph Bulovas replace him. A sophomore, Bulovas made all five of his point after touchdown tries.

DJ Dale, another freshman, suffered a mishap versus the Golden Eagles.

He was immediately taken to the locker room and per Saban, he has a strained patella tendon.

“I think he is going to be okay,” Saban said of Dale.

“Doc thinks he may be okay. Hopefully, we get some guys back for this game. We’ll just have to make day-to-day decisions throughout the week.”

With it down three veterans on defense, the Tide cannot afford anymore injuries.

The team will return to practice next Monday to prepare for Ole Miss.