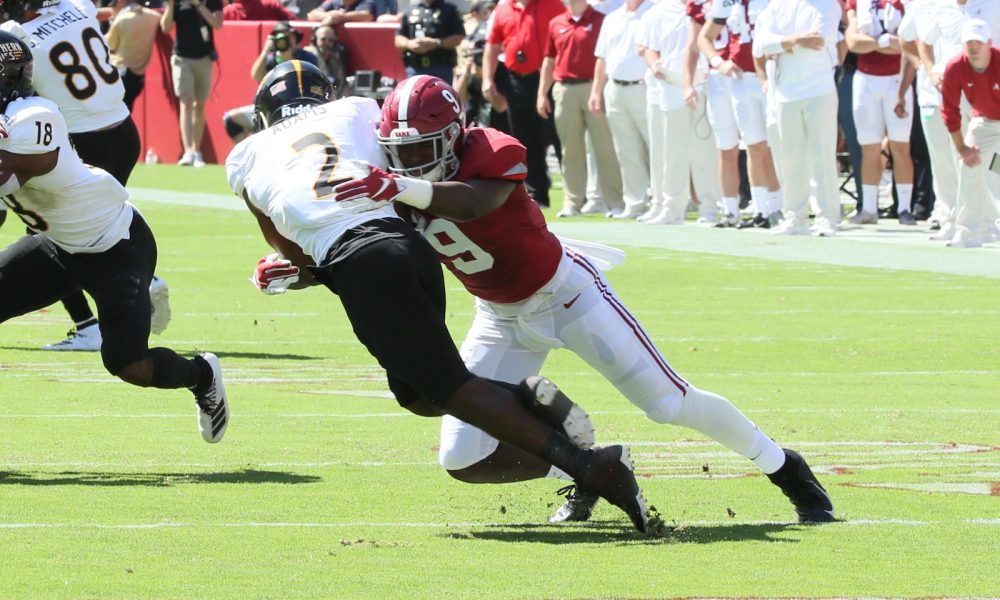 If any collegiate program had the caliber of true freshmen to cushion the blow of losing two inside linebackers and a defensive lineman to injuries, the University of Alabama would serve as the institution.

After playing a bunch of new faces on offense in the 2018 College Football Playoff National Championship Game (2017 season) and having to start Dylan Moses late in the year as a freshman, the Crimson Tide looks to top that feat under Nick Saban.

Prior to the start of this season, UA lost Moses and Joshua McMillon to knee injuries in fall practice.

Through three matchups, it sustained another loss as LaBryan Ray (foot) will miss at least six weeks.

Per multiple recruiting networks and fans of Crimson Tide football, the 2019 signing class was pegged as Saban’s best to date. He stockpiled talent on both sides of the ball; however, the athletes on defense are seeing more action and have started to take form.

The pace began to slow down some for the likes of Shane Lee, Christian Harris, Jordan Battle, Justin Eboigbe and even Christian Barmore – despite him being a redshirt freshman.

Regardless of DJ Dale (knee) leaving the game with an injury, these five helped Alabama limit the Golden Eagles to 226 total yards offensively (52 rushing, 32 carries), two conversions on third down (11 tries) and seven points in a win.

This group combined for 4.5 tackles for loss, one sack, one fumble recovery and 20 tackles.

Should the Tide keep players healthy and get others back, the growth of the freshmen will be monumental in the team returning to the CFP stage and winning a national championship.

Listed below is a breakdown on all five freshmen.

He was pulled for Ale Kaho versus South Carolina, but Harris was much better at Bryant-Denny Stadium against Southern Miss. The 6-foot-2, 244-pounder finished second on the team in total tackles (six) and collected 1.5 tackles for loss.

He blew up running back, De’Michael Harris of the Golden Eagles as he read the play, shot through a gap and stuck Harris for a 3-yard loss.

Christian Harris’ speed, athleticism and play recognition all were in form.

He played defensive back at University Lab School in Baton Rouge, La., so he has the ability to cover and showcase lateral quickness.

Coach Saban was pleased with his performance and has much confidence in the four-star.

Harris will face another perimeter team in Ole Miss this week, but the contest with USM puts him in a better situation to attack Matt Corral and the Rebels.

Lee has settled into his middle “Mike” linebacker role.

He attacked plays with effort, efficiency and quickness – totaling five tackles, one tackle for loss and one sack. The 6-foot, 246-pounder looked in control on defense and was sound against Southern Mississippi.

He assisted a group that forced two turnovers and allowed just one red zone opportunity for the Golden Eagles.

In replacing LaBryan Ray, Eboigbe held his own at defensive end.

He finished with three total tackles and rendered USM to just 1.6 yards per carry and 3.9 yards per play.

The four-star will continue to grow with more reps and fans will soon see the quick-twitched rush abilities that Raekwon Davis spoke on about Eboigbe.

Listed at 6-foot-1 and 201 pounds, the four-star from Florida has size, range, athleticism and strong ball skills as a safety. Saban is grooming Battle to potentially take over in the secondary, upon Xavier McKinney’s departure to the NFL Draft.

He nearly recorded his second interception of the season, unfortunately Battle slipped on the play and the ball went through his hands.

However, he did tally three tackles — including one stop for loss and one fumble recovery.

Battle is quickly becoming a turnover machine and he will be special down the stretch of this season.

A redshirt freshman from Philadelphia, Pa., Barmore’s teammates were excited the moment he entered the game on last week.

After a horrendous targeting call versus South Carolina, the former four-star immediately made his presence felt. The 6-foot-5, 310-pounder blew up a play in the backfield for a loss of five yards and had fans screaming inside Bryant-Denny Stadium.

Barmore was credited with three tackles and while he is built like former Tide standout, Quinnen Williams, his playing style resembles more of A’Shawn Robinson.

He brings a level of aggression and nastiness to Alabama’s defensive front.

As good as others are, the Tide’s coaching staff needs to look at creating more opportunities for Barmore to get reps and make plays.