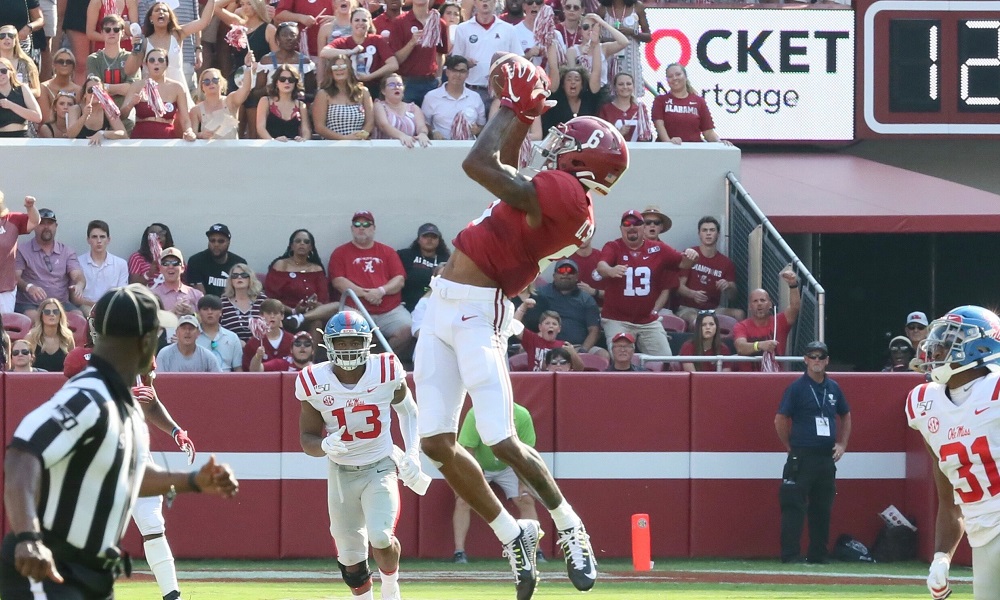 Alabama junior wide receiver, DeVonta Smith, cemented his name in the Alabama record books by scoring five receiving touchdowns in the first half of Alabama’s, 59-31, win over Ole Miss on Saturday.

Smith finished the game with 11 receptions for 274 yards and 5 touchdowns. The Louisiana native now has eight touchdowns on the season. Smith said he hopes every play goes his way.

“When coach calls a play, I hope it just plays out for me,” Smith said. “Today it did.”

Alabama’s head coach, Nick Saban, expressed in his press conference after the game, their offense is not designed to set up one wide receiver and Tua Tagovailoa’s decisions are based on what the defense does. Saban said Smith just did a good job at making plays after the catch when his name was called.

“Smitty (Smith) did a great job running after the catch, today, on a couple of those plays, he made,” Saban said. “He made a great catch on the fade ball in the end zone. Smitty is a very good player. He is a hard worker and he got his today. He got the opportunity.”

Smith has already cemented his name in the minds of Alabama football fans with his amazing catch in the 2018 National Championship game to win Alabama its 17th national championship. The Amite product said his goal has been to make a name for himself outside of the 2nd & 26 catch since then.

“That has been the goal the whole time to get my name established and not just to be talked about because of the catch, get my name out there,” Smith said.

The Alabama record for the most receiving touchdowns in one game for Alabama was three and it was previously held by a number of Alabama wide receivers, including Amari Cooper, Jerry Jeudy and Ardarius Stewart. Cooper did it twice in 2014.