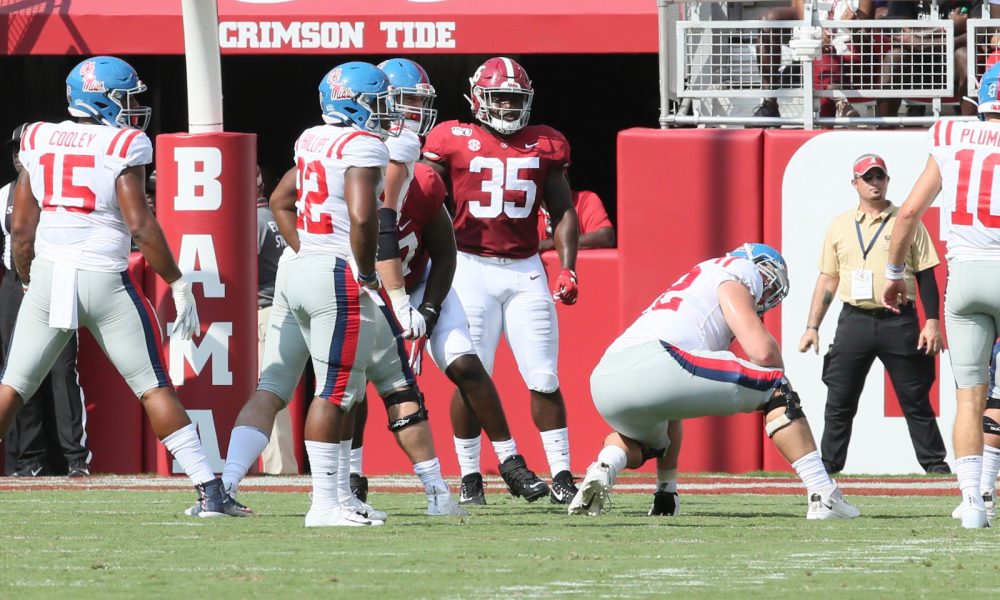 It is not the suffocating style of defense that was displayed under coaches such as Paul Bryant, Gene Stallings or even during the early parts of Nick Saban, but this year’s group for Alabama has managed to still be solid.

While it must improve its efforts against the run, the Crimson Tide is allowing 14.8 points per game – which is just outside the top-10 nationally at No. 13. Injuries have played a huge role with not having linebackers Dylan Moses (knee) and Joshua McMillon (knee) this season.

The Crimson Tide also don’t have LaBryan Ray (foot) for a period of time, and it has forced Saban to start more true freshmen than usual.

Its playbook has been simplified to prevent confusion and the coaching staff is implementing a lot of things to help the young players.

Despite its love for signing four and five-star athletes, Saban likens his system to high school students trying to adjust to college courses.

“You heard what I said before. I said it this morning, AP classes,” Saban said Wednesday.

“Advance Placement. That is what we are teaching. It’s a challenge to make an A and those are hard classes. Hard to make an A, but that’s what we are trying to do and these guys are working their tails off to try to do it.”

In the defense of freshmen linebackers, Shane Lee and Christian Harris, both guys are high on Alabama’s roster in tackles – despite a few mistakes. Lee, a native of Maryland, is third on the squad in total stops (30) and has two tackles for loss with one sack. Harris, who is from Baton Rouge, La., has 24 tackles with three for loss of yardage.

The two will share the task of neutralizing Kellen Mond’s ability to break containment versus Texas A&M.

Along with this, freshmen such as Jordan Battle in the defensive secondary must be ready to limit any form of big-play opportunities in the Aggies’ passing game. Jimbo Fisher boasts a group of elite playmakers – headline by Jhamon Ausbon, a junior and Mond’s favorite target.

It has worked on some different things in practice, but Saban said ‘there is nothing you can do to teach experience.’

The more these young faces play, the better they will become down the road.

“Well, we do as much as we can to try to expose them to things that they have not seen before that they will see in the next three games,” Saban said. “We will spend a little more time on this particular game. We spent a lot of time doing walk throughs, 11 on 11 walk throughs, so that you are getting a multitude of reps with these guys to see things without wearing them out.”

Whether it has been extra meetings, maximizing reps or some other form of team activity to build knowledge, the Tide is preparing the freshmen for the journey ahead in pushing for both a conference championship and a sixth consecutive College Football Playoff appearance.

When you get exposed to more things, you get more comfortable adjusting to those things,” Saban said.

Alabama OL Chris Owens ‘very questionable’ for TAMU, per Nick Saban
Where do Alabama commits play this week?
To Top
%d bloggers like this: