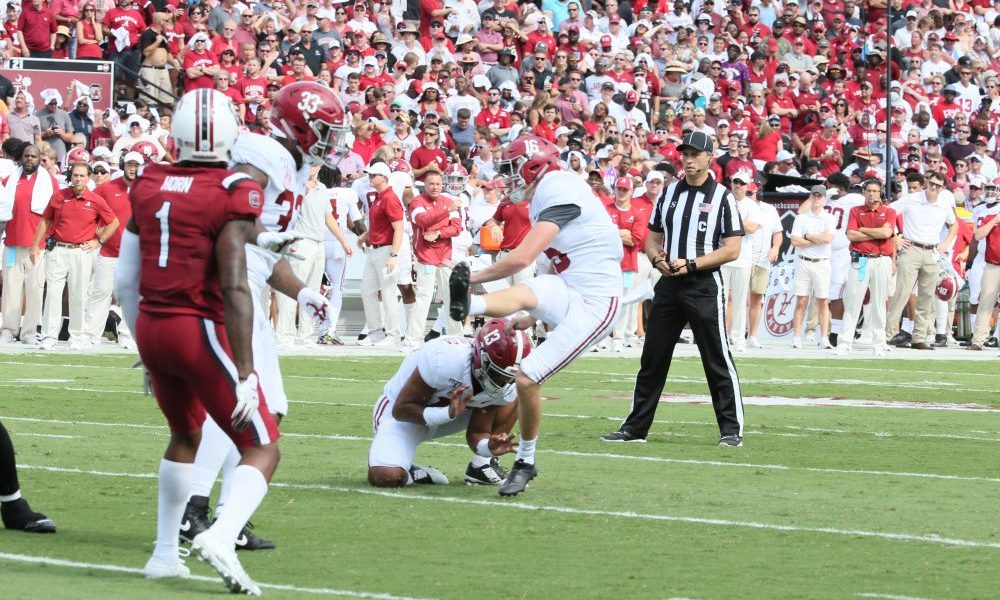 Other than winning the football game the biggest responsibility of the coach is to ensure one thing doesn’t happen. Don’t hurt the quarterback. With the recent evolution in offenses these days, the quarterback’s importance has skyrocketed even requiring teams to have multiple capable options if need be.

So why does Nick Saban send Tua Tagovailoa on the field for field goals and extra points? Normally coaches put their backup quarterbacks in that position in case of a broken play and to keep their starters out of danger. Even last year second-string quarterback Mac Jones did the holding for the Crimson Tide’s special teams so why make the change this year?

Well, on Thursday during his radio show Saban shed a bit of light on why he has his Heisman candidate involved on special teams.

“Well it just happens to be that Tua’s really, really good at this,” Saban said. “You know AJ (McCarron) did it when he was here, too. Now, it does enhance your chances of being able to fake the ball because you (have) someone athletic enough to run and you also have someone with the arm talent to throw a pass, if you want to do that.”

It does make sense that Saban would want his tracts covered in the event of a bad snap or if the team decides to fake a field. Especially with the creativity on the fake in last year’s national title game against Clemson, it’s probably a good idea to have a true threat back there.

But that’s not to say that Tagovailoa is the only option and is being forced into it. Saban isn’t the only one who decided on who trots out there.

“We’re training Mac (Jones) to do it and Slade Bolde, who was a high school quarterback, he can do it,” Saban said. “So, we’re not making Tua do it just because, and a little bit of it is up to the kicker. What is the kicker’s preference? When the kicker says, ‘I really like this guy as a holder,’ that enhances his confidence of being confident, so you want to listen to that.”

Tagovailoa and Will Reichard both worked together all throughout fall camp and have obviously found a system that works for each other. If that is who Reichard has the most success with Tagovailoa as the holder than it would be wise to appease his needs. Especially with the recent history of Alabama’s kicking which Saban is well aware of.