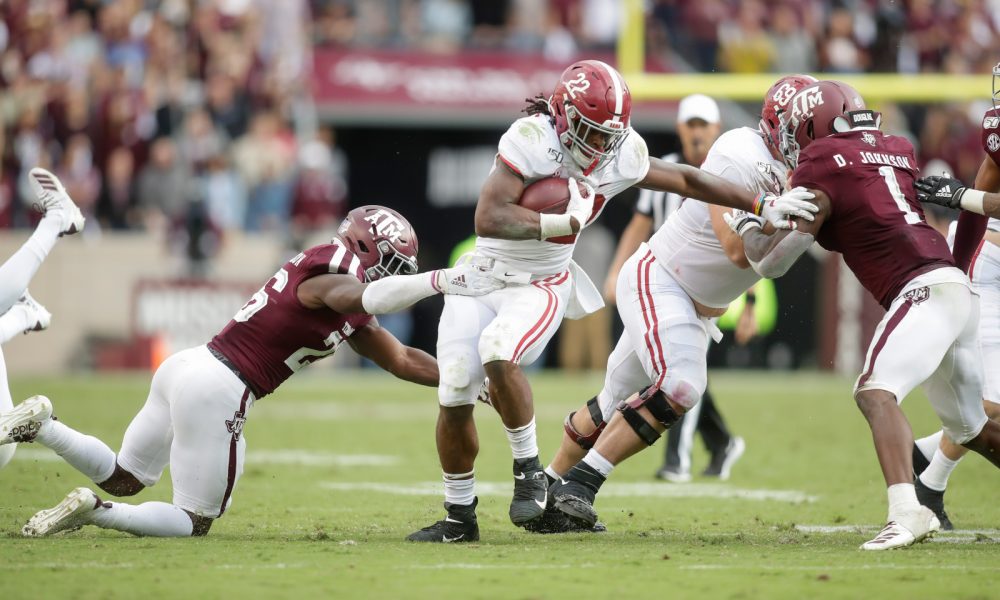 In the last three games, Alabama’s running game has started to surge.

The move to start Landon Dickerson at center and Deonte Brown at right guard against Texas A&M paid off for Nick Saban, as both players spearheaded a balanced attack that led to the Crimson Tide’s 47-28 win over the Aggies on last week.

Throughout practice, the rotation of Dickerson, Brown, Evan Neal, Alex Leatherwood and Jedrick Wills was not only strong, but this was also the lineup fans envisioned at the beginning of the season.

As productive as Chris Owens is, the group Alabama had on Saturday bullied the Aggies’ defensive front.

He is known as the finesse one between he and Brian Robinson Jr., but Najee Harris displayed power behind this line.

The junior from California dragged tacklers and was a force running north and south. He turned in his second 100-yard performance (114) this season on 20 carries, to a strong tune of 5.7 yards per rush.

No drop off occurred upon Robinson getting his opportunities, as he collected 51 yards rushing on 10 attempts with a touchdown.

The men up front allowed for both backs to accomplish runs of 10-plus yards, while providing Tua Tagovailoa with time in the pocket to connect with them in the passing game.

Harris collected his fourth touchdown reception of the year, which came on a 16-yard pass in the middle of the second quarter. Robinson caught two passes for 33 yards.

Despite having 11 incompletions on 34 pass attempts, Alabama’s offensive line protected Tagovailoa to 293 yards passing with four scoring tosses. He was only sacked once and pressured twice; however, the junior stands alone in the school record books for career touchdown passes (81).

The improvements started versus Southern Mississippi and after facing Ole Miss and Texas A&M, people are starting to look at this unit as a potential Joe Moore Award-winning one.

It still needs to clean up some things, especially penalties, but the line is getting better with each matchup.

New face joins Heisman leads as movement occurs after week six
Alabama WR Jaylen Waddle shines in his return to Texas versus Aggies
To Top
%d bloggers like this: