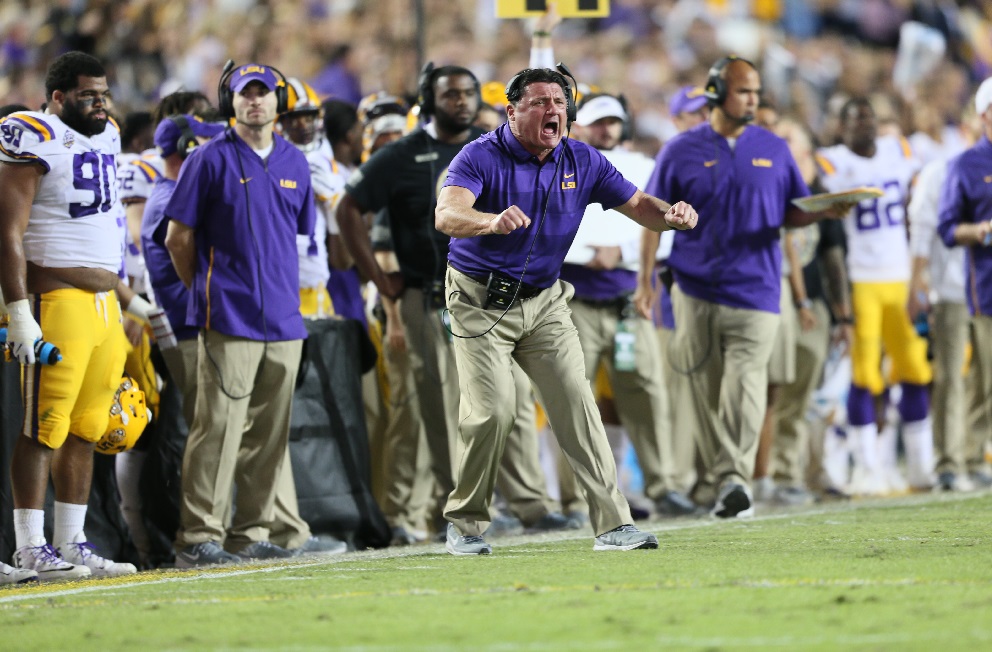 There is a very good scenario that this Aug 9th meeing between Alabama an LSU may not be the only meeting this year. See why this is a strong possibility.

Perhaps not. Alabama’s schedule may not allow them to make the playoffs with a loss, but looking at the resume that LSU has this year, there would be a very strong argument made that a one loss LSU, provided the loss was close, might be more deserving than an undefeated Clemson who has played one of the weakest schedules of anyone likely to have strong consideration.

There won’t be nor their should be a contender from the PAC 12. Any other conference with a one loss won’t come close to LSU’s resume and really only an undefeated Ohio State or Penn State and perhaps an undefeated Oklahoma would have a claim to slots two and three in the playoffs and then there’s the chance of an undefeated Clemson.

Clemson has not and will not play any team that is still rated in the top 20 by the end of the regular season unless somehow Texas A&M can hang onto that and it doesn’t look like it will and looks to be headed to a 7-5 schedule. How can the playoff committee put a team like that ahead of someone with LSU’s pedigree? After all, Clemson could have and maybe should have lost to a middling North Carolina Tarheel team that won’t make into the 20 top twenty by season’s end.

Without one single win against a team still rated in the 20 by season’s end, picking Clemson would be the weakest resume team the committee would have ever put in the playoffs.

The college football playoffs were supposed to make it harder for the SEC to have two teams make the playoffs, but indeed, it could be a very real possibility. LSU will play four teams who should still be in the top 20. Texas, Florida, Auburn and Alabama. Utah State may also sneak into the top 20 and they also be Texas A&M, so that could be five better wins than Clemson had and I expect them to beat Texas A&M by a larger margin than Clemson did. Would that make it six better wins than Clemson if they do that?

While the committee will have some hard decisions to make should LSU lose a close game to Alabama and no decision can be guaranteed, neither can the question that the November 9th meeting may not be the last meeting this year between Alabama and LSU should both teams finish the year strong.

Should that happen, you’ll hear screams and cries from the ACC that rival those of the BIG 10 for being left out of consideration.