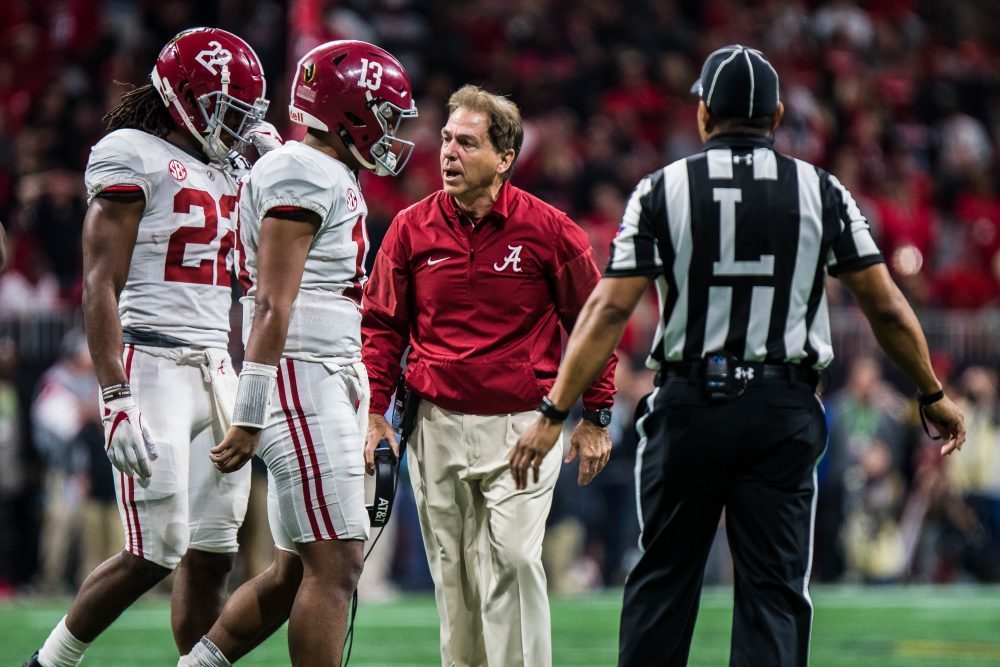 Nick Saban has been on the mountain top for a while now and each year the division between him and the rest only gets farther. See why no one will knock him off the top.

Maybe it’s time to just say these things while Nick Saban is alive to hear them. Without a doubt, the best college football coach of all time is still plying his trade in Tuscaloosa. He is quite simply, the best that ever was and it’s a throne that he’ll sit on for as long as chooses and there is no one alive and coaching now that can attempt to knock him from his throne.

Nick Saban will long be dead as will most of the readers of this article, until someone makes a run at the records that Nick Saban has set. In this day of 85 man rosters and NCAA rules, it will be near impossible to see another coach win championships at this rate.

Twice the media have reported that the Saban era is over, that his day has passed, only to see him win yet another national championship and be the only coach in continue to be in the college football playoffs every single year. He is also the only coach to continue to be a top recruiting class coach every year in and year out.

The Saban era will be over when Nick Saban says it’s over. Nobody is taking that away from him either.

We are living in the day when many of us remember the best of both worlds. We got to see coach Paul “Bear” Bryant work his sideline magic and see history made and now we’re getting to see something that most of us thought was not possible, another coach at Alabama that made Coach Bryant the second best head coach in their history.

While both coaches spawned many great men who learned learned their trade on his staffs, only Nick Saban is undefeated by any of them. His record is now 18-0 against coaching against his protegees while Bryant was defeated by several of his assistants and former players but did keep a 43-6 record against them.

Yes, these are days to remember if you’re an Alabama fan. Many thought Jimbo Fisher might have a team at Florida State that could topple Saban. They didn’t. Now there are those that think Jimbo may eventually build a team at A&M that can rival Saban. Well it looks like that is years at best down the road after Saturday’s game.

And there are also folks who think that Kirby Smart will be the first to topple his old boss. If they played horseshoes, he’d get some points for being close, but it’s still no cigar for Smart either. Plus, after last night’s loss, it doesn’t look like Kirby is due to get that win for a while.

There has been talk that Nick Saban makes college football boring because every year it’s just seeing if there’s a team that topple Alabama. But they are wrong. You are getting to see the very best that ever was, maybe the best there ever will be and you’re getting to see it each week. Years from now many will marvel and wonder how he did it and only wish they could have seen it happen live with their own two eyes.

Right now, every football weekend is Christmas if you’re an Alabama fan and you should treat it as such. Nick Saban is still on his throne and you get to be a part of the kingdom.