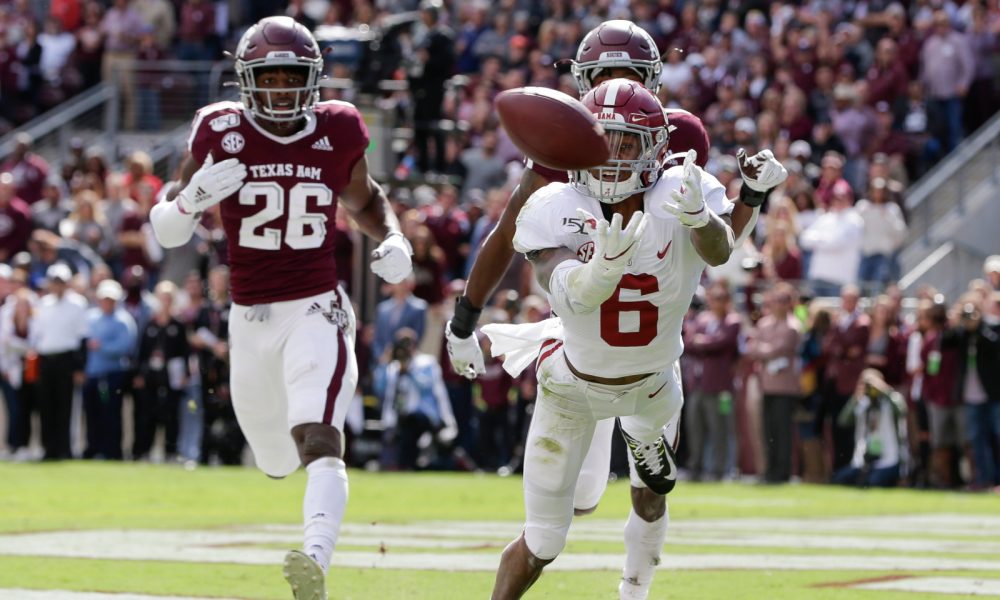 For a second time, Nick Saban has to suspend DeVonta Smith.

The first one happened before Alabama took on Duke to start the season, but the incident versus Texas A&M was ‘more serious’ — according to Saban. In the second half of last week’s game between the Crimson Tide and Aggies, Smith was involved in an altercation with another player.

While the defender from Texas A&M initiated the scuffle, the junior wide receiver retaliated with a punch and was disqualified from the game.

A native of Louisiana, Smith is one of the more even keeled players on Alabama’s roster.

For the four-star to be provoked to anger that quickly, one knew that something crazy had to occur. He currently leads the team in receiving yards (636), touchdowns (nine) and yards per game (106) with 38 catches in six matchups.

Despite being the hero as a freshman and a very good teammate, discipline remains Saban’s biggest motto.

Per the Tide’s head football coach, Smith will be suspended one-half of this week’s rivalry meeting with Tennessee. This is the team’s first night game of the season.

“This is a lesson all players need to learn from,” Saban said on Monday, in discussing Smith’s actions from last week. “You can’t make emotional decisions on the field… can’t do what you feel like doing… you have to have enough discipline to walk away, even if you are provoked into something that you don’t like.”

Saban stated the decision to discipline Smith was made via the coaching staff, to help him make better choices as a student-athlete.

“Smitty is a great guy,” Saban said. “He is one of the best guys, hardest work, does everything right, but it doesn’t make any difference when you make emotional decisions. When you make bad decisions, sometimes they lead to consequences.”

After a big day on special teams, an opportunity arrives for Jaylen Waddle.

He will be a focal point offensively for Steve Sarkisian in the absence of Smith. When one-half of “2nd and 26” missed two games last season, it served as some of the biggest reps for Waddle on the field with Jerry Jeudy, Henry Ruggs III and Alabama’s quarterback, Tua Tagovailoa.

The sophomore has 245 yards receiving with one score on 15 catches.