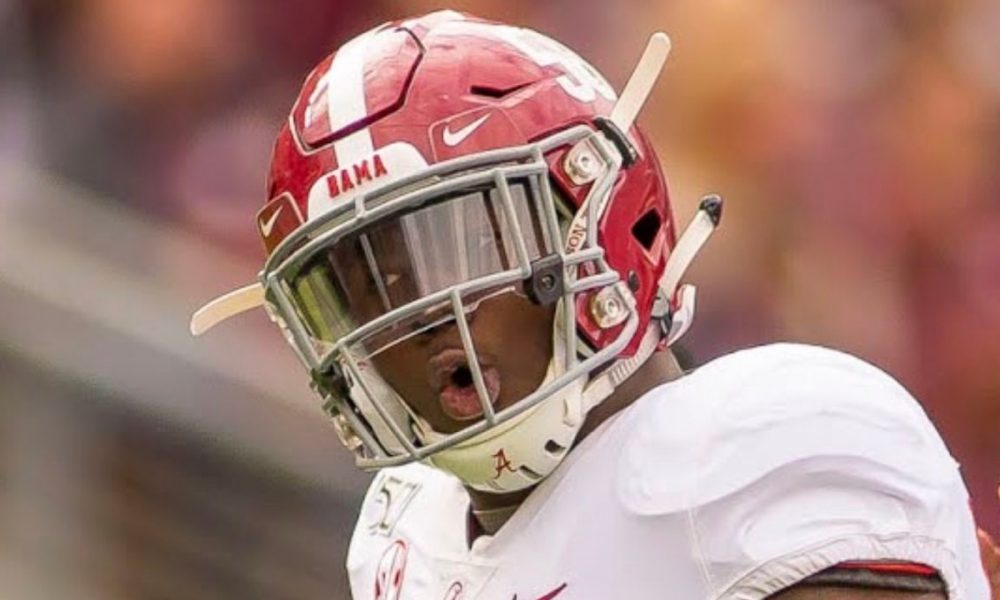 Of the talent that makes up Alabama’s defensive line, there is a name Brian Baker seems to always call as the position coach at practice.

The first-year assistant under Nick Saban calls this name, because he knows first-round potential awaits it in the moment it locks in.

He’s from Philadelphia, Pa., but Christian Barmore feels at home in Tuscaloosa, Ala.

The 6-foot-5, 310-pounder is a demon on the field. He leaves quarterbacks in fear, turns running back backwards and carries a skill set that has the make-up of former Tide standouts, Quinnen Williams and A’Shawn Robinson.

Off the field, the redshirt freshman loves his teammates.

His smile and laugh puts everyone in the right frame of mind, while his play on the field energizes the sideline and jump starts the defense. As much as Saban wants to see Barmore mature quickly (and he is getting there), the Alabama head coach understands he cannot keep this breed of a pass rusher off the field. After recording one of the team’s five sacks of Kellen Mond in a 47-28 win over Texas A&M, Saban is creating a role for “Mr. Energy” on defense.

“He’s a really good pass rusher, Saban said of Barmore. “He gives us something inside that I think is very helpful in pass rush. It’s a role that we have been trying to groom him for and the more knowledge and experience that he gets… He did a good job in the game. We will try to continue to use some of that inside pass rush he gives us in the future.”

In the style of football he plays, one can tell Terrell Lewis has faced much adversity.

He’s been through injuries and has endured moments of doubt to where it was a question as to whether he would ever be healthy again.

To ensure the importance of the gridiron game, Lewis carries a ball with him wherever he goes. Upon being asked why he is so close to the sport, the redshirt junior looked at his prop during Monday’s media availability and called it ‘his wife.’

His love for football produced big numbers for Alabama’s defense versus Texas A&M, but Lewis is more so recognized as one of the big brothers on the team. Like any elder sibling, sometimes one draws strength, encouragement or just becomes more motivated when the younger brother/sister is having success. In the case of the former five-star, he sees a lot of himself in Barmore and wants to see him be more ‘active’ in the defensive line rotation.

“He gives the team a lot of energy,” Lewis said of Barmore. “A lot of guys feed off his motor and his personality. Even off the field, he brings an energy into the room and you know you are bound to laugh. Playing with Barmore, we are happy to see a guy like that make plays.”

If one wants to identify the unquestioned leader for the Tide on defense, it needs to look no further than Xavier McKinney at safety.

The junior and native Georgian directs the group on the field and currently leads the team in total tackles (47) with one interception through six games.

McKinney finds no problem with leading a unit; however, it always helps to have someone put you in a position to be aggressive. For the second-year starter, he said it is the play of Barmore that jump starts this defense.

It is one thing to have your teammates on defense recognize you as a big-time player, but the testament comes when offensive players notice you. Jaylen Waddle, a sophomore at wide receiver, could only smile upon yours truly mentioning Barmore to him in a conversation.

‘Excitement’ was the word he used.

“He is a very exciting player,” Waddle said of Barmore. “We always knew and just seeing him give his all… He’s going to be a big-time player.”

Seeing how he is quickly winning over players; it is only a matter of time before Saban really increases his responsibilities. A few things in Barmore’s game need to be cleaned up, but the coaching staff will continue fine-tuning him.

He is going to be valuable in the coming weeks, especially when the LSU Tigers make its trip to Bryant-Denny Stadium on Saturday, Nov. 9.

He has eight tackles (two for loss), one sack and two quarterback pressures in six games.