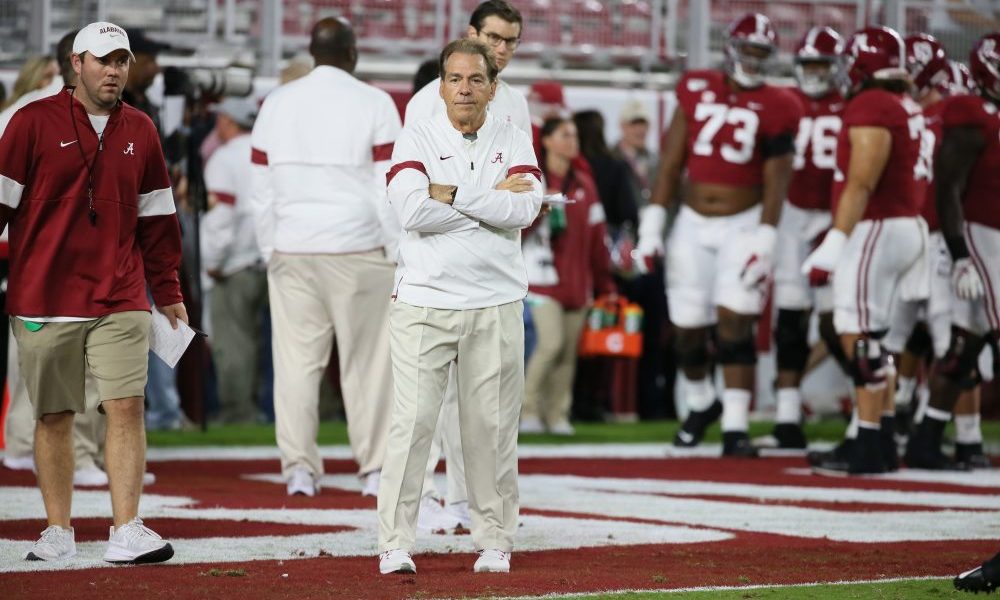 It took eight weeks but Alabama head coach Nick Saban was finally prompted to respond to a question with a bit more anger than usual. During his Wednesday press conference Saban was asked if he would be making an effort to play true freshman quarterback Taulia Tagovailoa this weekend against Arkansas.

The younger Tagovailoa has been working alongside Mac Jones all week and Saban has said prior to today that everyone had to be prepared.

But his response today left little room for interpretation.

RELATED: Nick Saban gets fiery during his final press conference of the week

“No. We’re focused on winning the game aight,” Saban said. “So we’re going to try to win the game, and we’re going to play the best players that we can play to win the game. And we’re not assuming that it’s going to be an easy game, aight, and we’re not assuming that we’ll have an opportunity just to play anyone that wants to play, to expedite anything except winning the game.

So we’re going to play everybody who can expedite winning the game, that’s what we’re going to do. So, I don’t think anybody should expect us to do anything else.”

The backup quarterback at Alabama has been one of the most talked about positions on the team, even dating back to last season when Jalen Hurts held down the spot. But Saban showed little remorse when discussing Tagovailoa who has appeared in two games this season and has thrown just one pass all season albeit for 20-yards.

Despite his main focus being on simply winning the game, Saban does have faith in Taulia.

“He’s got a lot of talent,” Saban said in his Monday press conference. “We’ve tried to get him some reps throughout the course of the year in case this happened. So, it’s going to be really important that we do a good job of progressing him this week, as well.”

WATCH: Nick Saban previews Alabama’s matchup with Arkansas
Alabama QB Mac Jones is the ‘top dog’ this week, according to Nick Saban
To Top
%d bloggers like this: