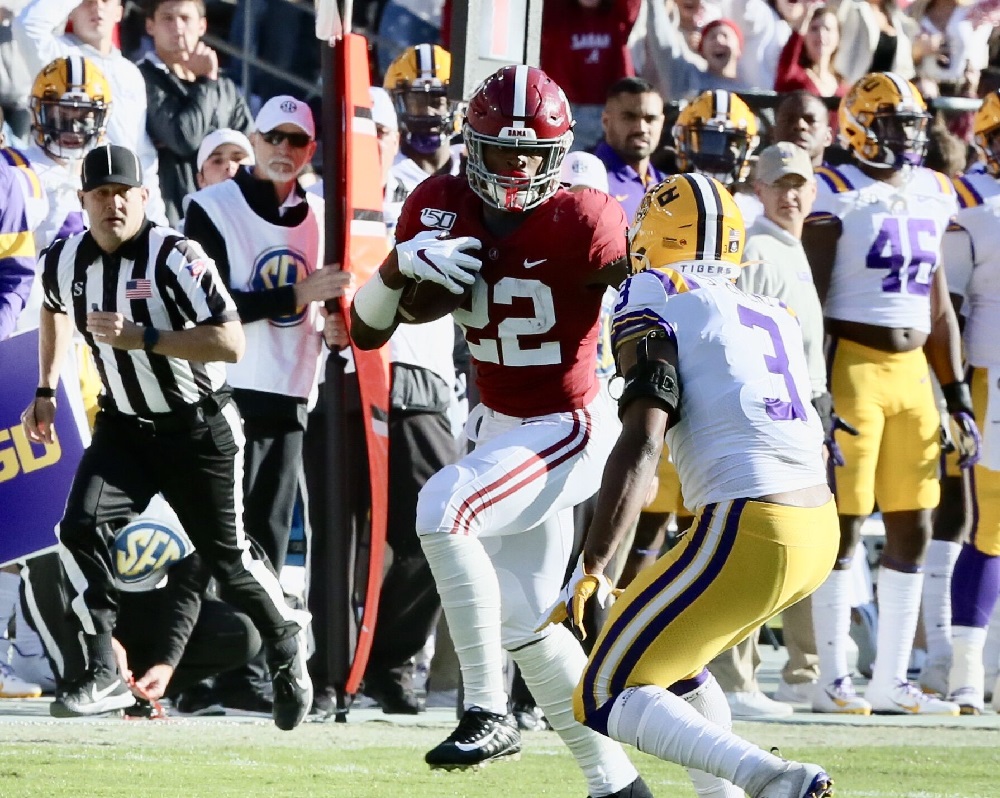 Numbers from the first quarter of the season compared to going into the last quarter shows trends a team is taking. You may not like the trend Bama is showing.

Earlier in the season when things were going well on some fronts and everybody was happy, they were shocked at how bad the numbers where in some areas. See how week three compares to week 12.

Week three is in black, week twelve numbers are in red and prepare to be shocked by the numbers from the first quarter of the season to the beginning of the last quarter.

50.3 – That’s the number of points per game they’re scoring per game on average

12- The number of points per game they’re allowing

7 – The number of teams who score more points per game. That would be Baylor, Oklahoma, LSU, Maryland, UCF and Notre Dame in that order.

2 – The number of teams that are scoring more points now, and they are still Oklahoma, but now add Ohio State

13- The number of teams allowing fewer point per game. That would be Wisconsin, who by the way nobody has scored on yet, Arizona, Georgia, San Diego State, Navy, Utah, TCU, Penn State, Clemson, Ohio State, Iowa, Michigan State, Texas A&M and by the way we are tied with Oregon.

15 – The number of teams that are allowing fewer points.

1686 – That’s the total number of yards they’ve accumulated so far in the season. If you’re curious, out of 207 offensive plays, that averages a nice 8.14 yards per play and 567 yards per game.

7- The number of teams who have accumulated more yardage per game so far this season. The leaders are Oklahoma, with 2030 total yards, 10.4 yards per play and 676.7 yards per game, Utah State, UCF, Louisiana – Lafayette, Arizona, Washington and Georgia. But most of those teams played the first teams much longer into the games than did Alabama.

7 – Still the number of teams who have more yardage. No drop here.

38- The number of teams that are ahead of us in total defense. We won’t list them all, but even miserable Tennessee is ahead of Alabama in total defense, so if you’re wondering how good the Bama defense is overall, the answer in not that good. In fact five SEC teams are ahead of them and Alabama has hardly played a formidable schedule to this point.

29 – Is now the number of teams ahead of us in total defense. This is a big pick up.

50% – That’s how many 3rd downs Bama converts on average. If you’ve read my articles over the years, you know this is a pet peeve of mine. When it’s really high, they win championships, when it’s in this range, they don’t.

53.15 – Third down conversions have improved and this is with one game with Mac Jones.

23 – The number of teams that are doing a better job with Wisconsin leading the way with a 65.38% conversion rate. By the way, Texas Tech, Louisiana Lafayette and Kentucky are tied with Alabama.

2- The number of teams doing a better job with third down conversions. What an increase!

50 – Alabama’s rank in allowing teams to convert third downs. Other teams are now converting 36.92% of their third downs, that’s going the wrong way. 49 teams are doing a better job.

93 – That’s where Alabama places against the 130 teams division one in placekicking. Here, Alabama just flat out sucks. They’re averaging making just 57.1 of their attempts.

125 – That’s where Alabama places against the 130 teams in division one football in Punting. Just when you thought nothing could be worse than their field goal percentage, their punting says, “Hold my beer and watch this!”. That’s an average of just 36.57 yards a punt and only five teams in all of division one are worse. To put this in perspective, I used to coach Pee Wee football and our 10 year old punter had about the same average.

118 – Alabama’s new punting rating out of 130 teams. Such a slight improvement, but still in the super sucky region. And by the way, their average punt is still only 38.86. Folks, this is just a joke for a good team.

Since nobody else on record has said this, here’s my now famous quote on special teams. “You can’t be a special team without good special team play.” With that said, few, very few are worse than Alabama’s kicking specialists.

OTHER NUMBERS THAT JUST JUMPED OUT

2 – Alabama’s rank in turnover margin. They are tied with Colorado, Washington State and Boston College with a 2.33 turnover margin a game. The leader is Notre Dame with three. This stat makes Nick Saban very happy as he is always harping on protecting the ball.

3 – Alabama’s new ranking in turnovers. Tua’s last game is the cause.

107 – Where Alabama ranks out the 130 teams in division one in penalties. There are only 23 teams worse than Alabama and this has to drive Nick Saban nuts. His early championship teams led the nation in this stat, now they simply suck. They average almost 72 yards a game in giveaway yardage. Did you realize they had committed so many penalties?

111 – Alabama’s new ranking in penalties. One of the worst in all of football and you still read folks saying Alabama has the refs in their pocket. How stupid a statement is that when you’re saying it against one of most penalized teams in football?

3 – That’s the number of sacks allowed by Alabama so far this season. I would have sworn from watching the games that number was higher, but I guess Tua’s scrambling away for zero to a yard or two just seemed like a sack in my mind. Only 24 teams have done better. That was only one per game.

10 – the number of sacks allowed in nine games. That’s still only about 1 per game, so that number hasn’t changed.

4- Number of interceptions so far this season. That’s 1.33 per game. 17 other teams have 4. Only seven teams have more, so the Tide is doing good here.

10 – The number of interceptions over nine game. That’s now just 1.1 per game and that’s still good.

1- Number of fumbles so far this season. 13 teams have yet to drop the rock this season, so that’s going well. That’s .33 fumbles per game.

6 – Number of fumbles in 9 games. That’s .66 fumbles per game. Even though that’s twice as much, it’s not a problem yet.

11th – Is the new ranking in most successful long plays. That’s a drop that shouldn’t make Bama fans happy.

WHAT THESE NUMBERS MEAN

This is reflected in the downward numbers in both total offense and total defense. But in fairness, the level of competition did increase since the first three games.

In good news, bad news, Alabama is converting a higher number of third downs, but they are also allowing more third downs to be converted by the opponents.

Special teams play in placekicking and punting haven’t gotten any better over the course of the season and are still among to nation’s worst. Can Alabama win with this?

And for the last of the bad news, Alabama was terrible at penalties during the first three games and actually got worse as the season went on. It’s really hard to believe that this is happening on a Saban coached team.

Now for the good news, Alabama is picking up in getting sacks. This is really good news and they aren’t allowing more sacks on Tua. They are also still one of the nation’s leaders in turnover margins. And though I didn’t compare the rushing yardage, it’s about the same per game, but Najee Harris has woken up and his numbers are better.

In all, there hasn’t been a huge change in the stats from the first three games until now. That’s good for some things and terrible for others. Alabama hasn’t shown a lot of growth and maturity as many hoped would happen. But in the grand scheme of things, it’s all about how things wind up in the last three games of the Alabama season that matter the most.