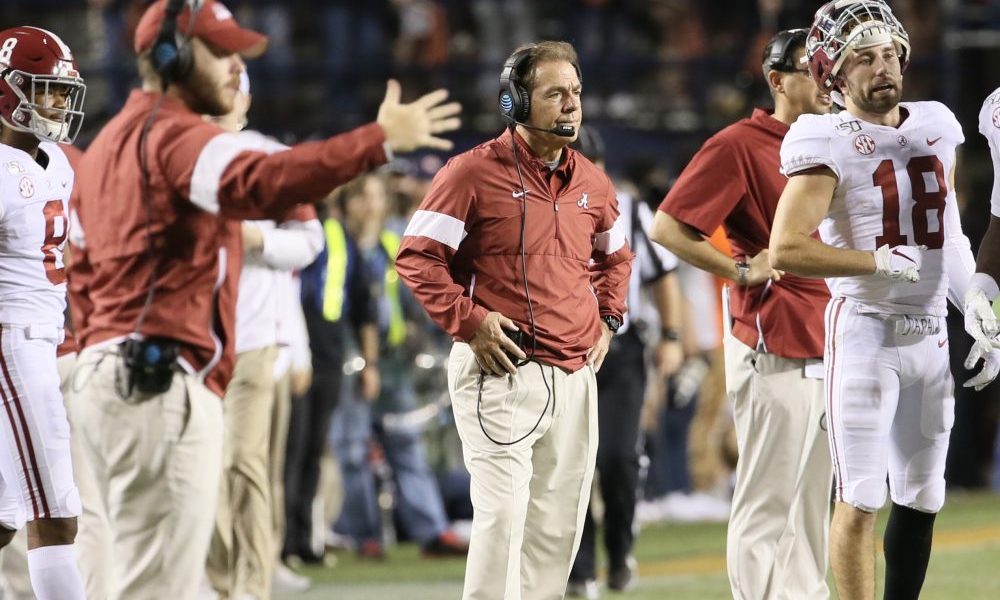 Prior to last Saturday’s Iron Bowl, Alabama believed that its bad luck with one-second plays during games had run its course. But in one of the more controversial plays of the year, the Crimson Tide was once again burned with one-second remaining on the clock. This time it came in the form of a last-second field goal before halftime.

Before the play, Auburn had just gained a first down with no timeouts remaining with what appeared to be no time left on the clock. With both teams heading towards the locker room, the officials called back out both teams for it appeared as if the Tigers’ receiver was downed with exactly one second remaining on the clock. In college football, the clock is stopped whenever a first down in gained and will immediately resume once the official blows their whistle for the start of the play.

Once the team’s returned to the field Auburn kicker Anders Carlson drilled the 52 yarder cutting the Crimson Tide’s lead down to four points.

RELATED: Tide fans choose a hypothetical player from the past to add to 2019 team

The play caused confusion to the masses as well as anger from head coach Nick Saban who was extremely animated following the attempt.

"Nick Saban on the sideline, not a happy guy." pic.twitter.com/fV2fRPObJg

“Well, they said there was one second on the clock,” Saban said to CBS during his halftime interview. “But it’s a live clock, so if (officials) chop the clock, there’s no way they can snap it and kick it in one second. If you clock the ball you’ve got to have three seconds to do it, so I don’t get it.”

Although Alabama went into halftime still with the lead, it was an even worse look for the game when the Crimson Tide went on to lose the game by three points, 48-45.

Things didn’t get any clearer following the game as Saban told the media during his press conference that one of the officials told him Auburn would not be able to get the play off.

“Well I don’t know if I should tell you that,” said Saban following the game. “but um… the (official) beside me said they won’t be able to get it off anyway.”

To clear this entire mess up the SEC explained the entire sequence of events and how Auburn was able to beat the clock in a statement to AL.com.

The statement reads as followed:

“At the end of the 1st half in the Alabama vs Auburn game, during a play that resulted in a first down inbounds, the game clock went to 0:00. Replay stopped the game to review the clock. The decision from the Instant Replay Official was that video evidence showed there was 1 second on the clock when the player was down so the clock operator was instructed to put 1 second back on the game clock. The referee came back to the line of scrimmage and informed both teams that the clock would start on the ready for play. The referee got back in position and blew his whistle and wound the clock. The snap was off before the clock went to 0:00. the play was officiated consistently with Rule 12-3-6-d, which states:

d. Clock adjustment at the end of any quarter.

If the game clock expires at the end of any quarter, either during a down in which it should be stopped by rule through play when the ball becomes dead or after the down upon request for an available team timeout, the replay official may restore time only under these conditions:

In the grand scheme of things, it does appear as if the officials acted accordingly during the end of the half which will surely still not be enough to please the Alabama faithful.