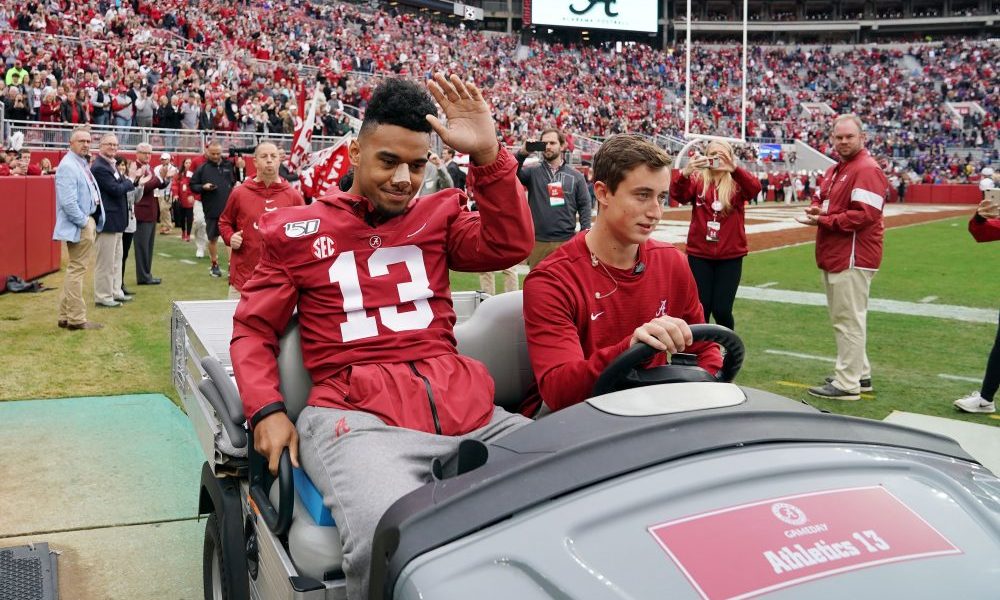 In an interview with the Tuscaloosa News’ Cecil Hurt on Tuesday, Alabama quarterback Tua Tagovailoa revealed that he is still “not too sure” if he will enter the 2020 NFL Draft.

Tagovailoa, who suffered a dislocated hip against Mississippi State on Nov. 16 has been heralded as one of the top quarterbacks in the class should he decide to leave. He is still in the process of recovering but taking the decision day by day.

“The deadline is between now and January 20(deadline for eligible players to enter draft),” Tagovailoa said to the Tuscaloosa News. “I’m still talking with my parents about it. I’m still not too sure. A decision could come tomorrow or I could wait and decide on the 20th of January.

RELATED: SEC provides explanation for Auburn’s one second field goal before first half

Whatever God puts in my hear my parents’ hearts, that will be the right thing.”

With the deadline being nearly two months away, Tagovailoa will surely have ample time to look at all of his options. And by the sound of it, that’s exactly what he and his parents are doing.

“The risk if I stay is obviously ‘Do I get hurt again?’ The reward is that I could come back and have another good year like my sophomore year and elevate myself back to the top of the (NFL) draft.

“If I leave, I think the risk is a little higher. That risk would be how far do I drop in the draft. To me, it’s 50-50 between going in the first round and possibly going in the second round. If I go somewhere from first (overall) to around 24th, the money will be set. But let’s say — and Ia m just picking a number — that I go to the 31st pick. That would be about 9 million dollars. That’s a lot of money, an amount of money I’ve never had before, but it’s not high first-round money and you can never make that money up. They say you can (make it up) on your next contract but money lost is money lost to me.

“Those are the deciding factors. If my parents tell me that they think I should leave, that is obviously going to be a factor. But so far, they’ve told me that it’s my decision.

Tagovailoa also did an interview with ESPN’s Kirk Herbstreit where he commented further on the matter of his impending decision.

Should he decide to enter the draft, Tagovailoa will be leaving as the all-time leader in passing touchdowns (87) and total touchdowns (96).

SEC provides explanation for Auburn’s one second field goal before half
Alabama drops to No. 12 in CFP Rankings
To Top
%d bloggers like this: