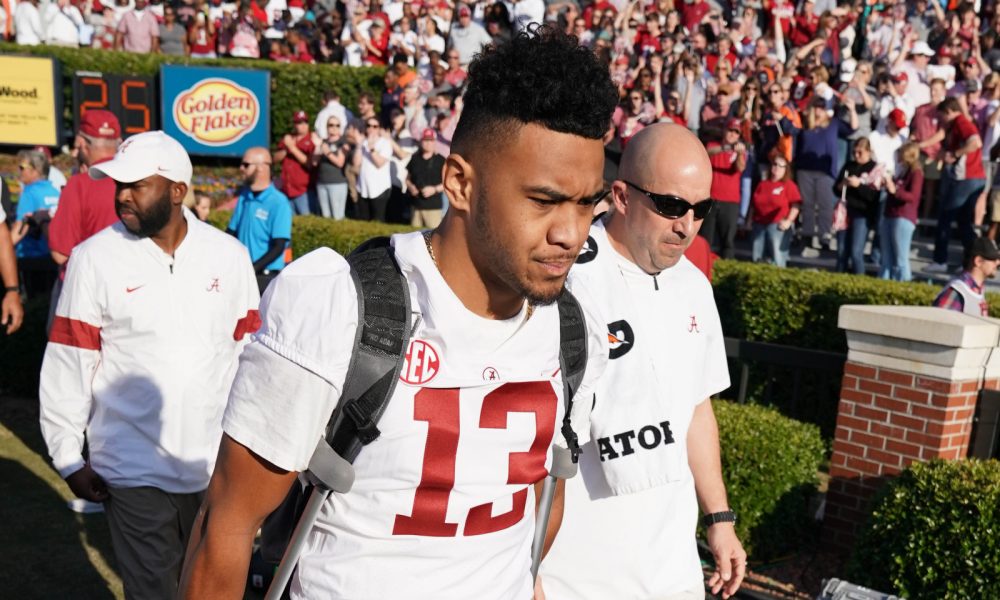 Up to this point, his decisions have been rather easy.

From his arrival to Alabama from Hawaii in 2017 to his choice of connecting with DeVonta Smith in overtime versus Georgia in the 2018 College Football Playoff title game, it has been a blast having Tua Tagovailoa wear the colors of crimson and white.

For someone who has answered so many questions for coaches, teammates and fans, the junior quarterback now faces the toughest challenge of his life. While he has not made a decision on his future in football or with the Crimson Tide, Tagovailoa did speak to reporters on Thursday about his latest challenge.

Since having surgery on his dislocated right hip, he’s returned to school, started rehab and continues to be a positive spirit on the football field.

As much as he wanted to play against Auburn, there was nothing much he could do in the Iron Bowl.

In all honesty, Tagovailoa said it ‘hurt’ yet he was proud of the way Mac Jones performed and gave the team a chance to win.

“We still had an opportunity to win the game,” Tagovailoa said. “I think Mac Jones did a tremendous job. He fought through adversity and I think that was the biggest question for everyone. I think he did well despite adversity.”

He was so used to interacting with his brothers on the field; however, only being able to just cheer made it tough for Tagovailoa. In terms of his rehab, he started on Wednesday and according to him, people were surprised with how much movement he was able to do.

While team doctors expect him to make a full recovery, Tagovailoa knows he will not be the same as he once was.

“There’s like metal in here now,” Tagovailoa said on his hip.

“I lose some rotation inward, so I won’t be able to twist it as much inward… but I wouldn’t need that as much. When you are running, you are usually always opening up your hip to the right or left. So, with what the doctors have said… They said I would make a full recovery and I would be able to play football again at 100 percent. I just won’t be able to rotate it internally the same way.”

Even as he rehabs, Tagovailoa can’t ignore the number of NFL teams are desperate for a quarterback. Regardless of his injury, there are still teams that would risk a first-round pick on him – including a few that would gamble a top-15 pick.

When it comes to the franchises that feel strongly about him, Tagovailoa told reporters it will be tough to turn down a top-10 to 15-offer.

“It would be tough to pass up, but I think there is a lot more to it than that,” Tagovailoa said.

Throughout this process, he has been able to lean on his family, his team and his faith.

“I firmly believe in the Bible,” Tagovailoa said. “The Bible says ‘You walk by faith and not by sight,’ so that’s what I am holding on to. Trust in the good Lord. He’s the best doctor for me and what I believe in and I believe all these guys I am surrounded with have been helpful with me and my rehabbing process. This is something that is bigger than me. I feel like I’ll still be able to come back 100 percent and play at the capability I know I’ll be able to play at.”

So many people have poured into him since the surgery.

He has spoken with fans, supporters and even those who have dealt with an injury similar to his (Bo Jackson) for advice. All of which have told him to not rush the process in trying to get back.

Tagovailoa has a decision to make, but his three years at Alabama have shown how tough and driven he is to do the right things. No matter what his next move is, Tide nation wishes him well.