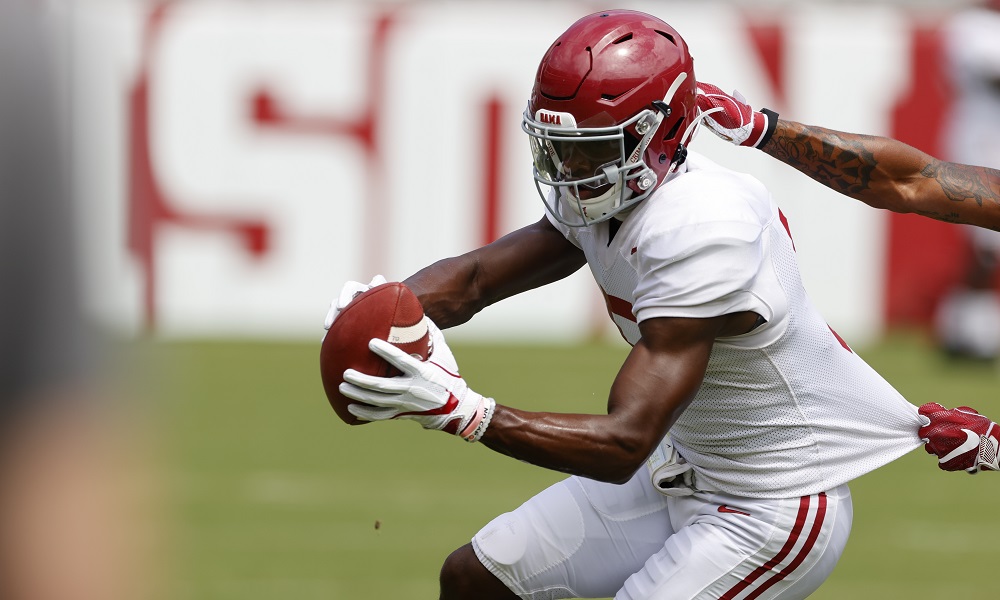 The next offensive player and the second freshman, who Touchdown Alabama will spotlight is true freshman wide receiver, Javon Baker.

– Fights for the Football In The Air

Summary: Javon Baker was one of the best route runners to come out of the 2020 recruiting class.

The Georgia product is a technician when it comes to running routes with his ability to get in and out of breaks. It is going to be hard to find a young wideout, who takes more pride in running tight and crisp routes than Baker. The former 4-Sar wide receiver has trained alongside the likes of NFL wideouts, Mecole Hartman and Calvin Ridley, to continue perfecting his ability to be an efficient route runner.

Baker also has great awareness of where he is when catching the football along the sideline as he trains to get two feet inbound. The combination of awareness and strong hands allows him to be a consistent receiver when it comes to catching the football. Baker’s athleticism tops off his skillset. It gives him the ability to go after the football in jump ball situations and win them while performing some acrobatic catches at times.

When it comes to carrying the football, Baker can make plays in space. The Alabama freshman put this on full display on the 7v7 circuit and an actual football games. This should help Baker pick up yards after the catch in Tuscaloosa.

Baker currently possesses a quick burst, which makes him dangerous when running short and quick routes. If he can incorporate more speed into his down the field routes, he can grow into a complete wide receiver. The McEachern product is making strides to get faster and improve his overall speed under Alabama’s new strength and conditioning staff.

Matt Rhea, who joins the Crimson Tide’s strength and conditioning staff this past summer, expressed Baker had the fastest time of the day during one of Alabama’s summer workouts.

All of the conversations coming out of Alabama’s fall camp point towards Baker being right in the thick of things when it comes to playing time at the wide receiver position this season. Devonta Smith and Jaylen Waddle are expected to be the two featured wideouts for Alabama, but there is room for a couple of other guys to make noise. Baker is currently expected to see the most playing time among the Tide’s freshmen wideouts. It is unclear how far up the depth chart he will be, but it may be safe to assume he will be one of the first wide receivers off the sideline.

Baker has an opportunity to continue the Crimson Tide’s recent success with developing elite wideouts.

He has an opportunity to make an impact as a freshman at the wide receiver position in Tuscaloosa similar to former Alabama wide receivers, Julio Jones, Calvin Ridley and Amari Cooper.

WATCH: Mac Jones, Bryce Young, Patrick Surtain, LaBryan Ray and others at Alabama’s 14th practice of fall camp
Mac Jones is having a ‘really good week’ this week, Alabama’s quarterback room continues to improve
To Top
%d bloggers like this: