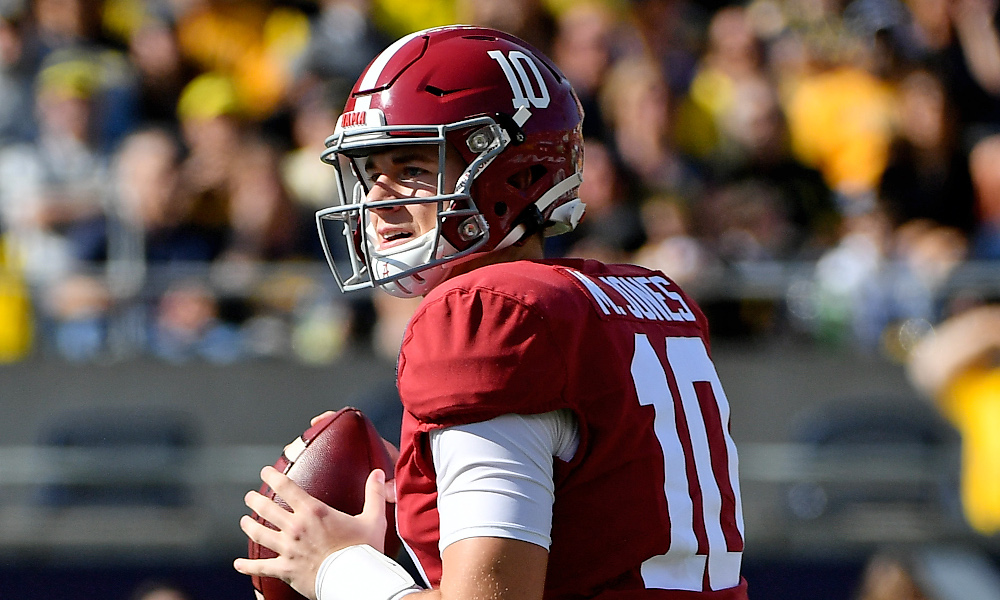 With fall practice starting on August 17, Touchdown Alabama Magazine will release a series of player spotlight pieces on starters and marquee contributors at Alabama for the 2020 football season.

RELATED: Alabama adds Missouri and Kentucky to its 2020 schedule

In these articles, we will look at the strengths and weaknesses of each player, provide expectations for 2020, give NFL Draft projections for those who are eligible, and conclude with how each one can impact the team.

The first player is Mac Jones.

-Summary: After having his listed height/weight at 6-2 and 205 pounds for so long (rolltide.com), Mac Jones has reached the ideal size for a quarterback at Alabama.

He added healthy weight to his frame and this will help him in an unprecedented 10 game, conference-only schedule in the Southeastern Conference. Along with his size, Jones returns as the most knowledgeable signal caller on the roster and he has been teaching both Paul Tyson and Bryce Young in the quarterback room.

A native of Jacksonville, Fla., the former four-star from the 2017 signing class is in his fourth year with the Crimson Tide and carries the complete trust of Nick Saban.

During this time of the Coronavirus pandemic and not having spring football, Saban must turn to those who are secure within the offensive system. Jones knows the entire playbook and when Tua Tagovailoa suffered a dislocated right hip versus Mississippi State in 2019, it was Jones who stepped in and provided much needed leadership for his team.

Of the 12 games he played in, Jones made four starts versus Arkansas, Western Carolina, Auburn and Michigan.

Regardless of a 48-45 loss to the Tigers, he gave everything he had. Jones totaled 335 passing yards with four touchdowns and though he tossed a pair of interceptions — both for scores — he put Alabama in position to at least send the matchup into overtime with a field goal late in regulation. He is not afraid to take hits, in terms of giving wide receivers a chance to make plays, but Jones’ toughness comes from a desire to prove doubters wrong. Even though he came from a championship high school program, The Bolles School, some people do not look at Jones as a national championship quarterback.

He has worked hard all summer and while Young has the appeal as a true freshman, Jones has anticipated this moment for a long time.

One of the biggest traits he brings to the table is a very good deep ball.

Per teammates, Jones has had the skill set of putting touch on deep passes since his freshman year.

In a conversation that yours truly had with former Tide safety Jared Mayden, he said Jones would throw nothing but bombs downfield to Tyrell Shavers (now at Mississippi State) and upon being asked by Saban to stop, the then scout-team quarterback had the moxie to confront his coach. The fact he backs down from no one is intriguing, especially Saban.

He has the necessary tools to win a championship.

-Summary: Mac Jones has played in 26 career games; however, he has only four starts.

He did a great job filling in for Tua Tagovailoa in his absence a season ago, but his peers at the position (both in conference and nationally) have more starting experience in headline games.

Jones will get that in the fall, as he intends on building off the success from 2019 and becoming better each week. In today’s age of college football, the idea felt by most people is a quarterback needs to be a dual threat.

The game has shifted to athletes that can do off-scripted plays and while Jones is not dangerously mobile, Nick Saban does not require this skill from his signal callers. Jones showed in the Iron Bowl versus Auburn that if he needs to make a play with his legs; he has no issues with pulling the ball down and picking up first downs.

Alabama graduated Tagovailoa to the National Football League, but it does not mean its offense takes a step back.

Jones is not only ready to continue what the native Hawaiian started, but he is also prepared to return the program to the CFP National Championship stage. It would be fun to watch him put up massive statistics; nevertheless, Jones made it clear during interviews last season that winning matters most to him.

He has three matchups — Georgia, LSU and Auburn —  that will define his legacy with the Crimson Tide and in a 10-game season, victories in those games will open more eyes to him as an impact player.

He came from a high school that was a championship powerhouse and competed in the Elite 11, yet Mac Jones has constantly been doubted as a quarterback. Although he is viewed as someone who can win games, people are not willing to look at him as “The Man” that will lead Alabama to a national title. This is his opportunity to shock the college football world and remind Tide fans as to why he was recruited.

He is not a Jalen Hurts or a Tua Tagovailoa, but Jones has a championship mindset.

He has waited four years for this moment and he’s about to cash in.